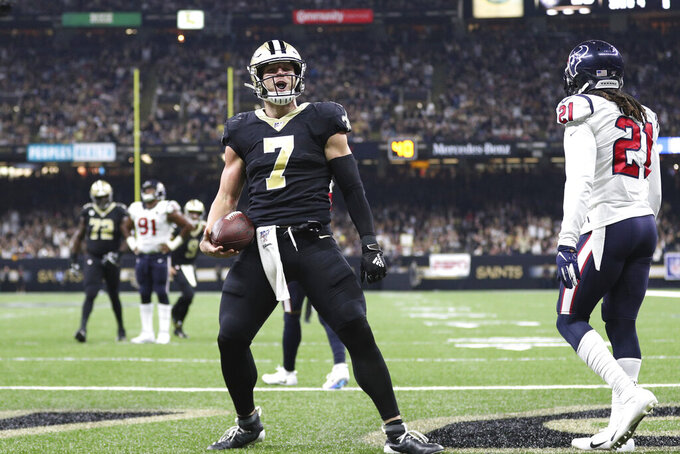 It has been a topic of discussion all week of whether it'll be Teddy or Taysom on Sunday when the Saints face the Seattle Seahawks. Except once place: the Saints' locker room.

"I would say Teddy and Taysom — no versus," offensive lineman Terron Armstead said.

New Orleans coach Sean Payton declined to name a starter this week after Brees underwent surgery Wednesday in Los Angeles to repair an injured ligament near his right thumb. The surgery will keep Brees out for several weeks.

Most assume Bridgewater will start, including many of his teammates. The 26-year-old quarterback has a proven track record after starting 28 games for Minnesota in 2014-15, leading the Vikings to a playoff appearance.

But Payton's unwillingness to name a starter is viewed as more than just tactical. There's a firm belief on the team that Hill will have a significant role as well, forcing the Seahawks to spend time preparing for two players.

"Drew Brees is incredible, but there's not much of a drop off with the talent Teddy and Taysom bring," wide receiver Austin Carr said. "As a receiver, obviously you appreciate that and you're excited. You don't run your routes any slower or any less hard."

For Bridgewater, this could be quite the comeback story.

The first-round pick out of Louisville was a rising young star already with a playoff appearance when a catastrophic knee injury during 2016 training camp wiped out most of his last two years with the Vikings. After a stint with the New York Jets last spring and summer, he was traded to New Orleans.

He turned down the opportunity to start elsewhere to return to the Saints in the offseason and be the backup to Brees. It was a bit of a gamble that could pay off. And he understands the significance, noting this will be the first meaningful playing time he has had since 2015. Not only is New Orleans' season at stake, but how he performs will affect his future.

"A lot of people I think forget what he did when he was a starter in this league," running back Alvin Kamara said. "Teddy has rank in this league."

Hill is building a similar reputation.

A multi-position player who has lined up in at least seven positions on offense and special teams, he has his own comeback story. A starter at BYU, Hill suffered a Lisfranc fracture in his foot as a senior and missed the rest of the season. He was granted a redshirt and awarded a fifth season, but a hyperextended elbow ended that campaign early as well.

Undrafted in 2017, he was signed and waived at the end of the preseason by Green Bay. The Saints quickly signed him and he has become a favorite among his teammates and fans because of his versatility. He has lined up at quarterback three times this season and it's possible he'll do so again against the Seahawks.

"Taysom came and made a name for himself just by being who he is, and that's a football player," Armstead said. "Wherever you need him, whatever he's called to do, he does it 110%. He's an X-factor in a lot of ways. I could point to last year where he was the spark that got us going. Struggle, struggle, Taysom made a play and we took off.

"Taysom is a guy who can create a spark."

Not many teams have the luxury of two viable backups.

"We've got three starting quarterbacks, and it's a credit to our front office," Armstead notes.

And most teams would never consider playing both. But there seems to be enough harmony in New Orleans' locker room to allow peaceful cohabitation.

"I love Teddy," Hill said. "I think from the second he got here last year through this year, we've become friends. I think our QB room is really close, so I'm rooting for him and I know Teddy's rooting for me. And we were there to support Drew when he was the guy. So that mindset is no different.

"And I think we both have the same role, and that's to win football games."