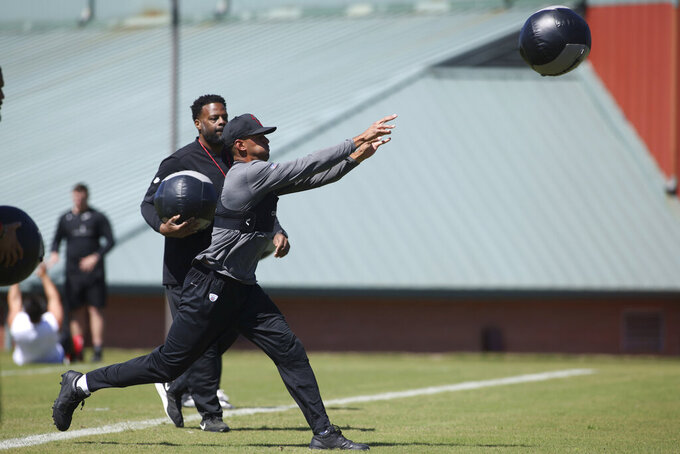 FLOWERY BRANCH, Ga. (AP) — The talent of the quarterbacks who might be available to the Atlanta Falcons in 2023 could impact decisions by general manager Terry Fontenot with the No. 8 overall pick in next week's NFL draft.

The Falcons' leadership could be weighing their grades of Willis and Pickett against the more highly regarded 2023 class that includes Alabama's Bryce Young and Ohio State's C.J. Stroud.

The Falcons need help at many positions, including edge rusher and wide receiver. With veteran Marcus Mariota signed as the probable 2022 starting quarterback, Fontenot doesn't have to rush his search for a long-term starter.

“If we feel great about a quarterback at whatever pick, then we’re going to take a quarterback, and if we don’t, we’re not going to reach and do something that we’re not excited about,” Fontenot said last month.

Fontenot described the quarterbacks in this year's draft as “an exciting class. They’re different flavors.”

Most evaluators say next year's quarterback class is more exciting. That's important for Atlanta to consider, because one year from now it could be in position to select Young or Stroud.

Limited by the $62 million hit in dead money that came with the Ryan trade, it could be challenging for the Falcons to end their streak of four consecutive losing seasons or even match last season's 7-10 finish.

Former Tampa Bay general manager Mark Dominik, now a draft analyst for SiriusXM, says the decision facing Fontenot is “very tricky.” Dominik said other teams hoping to select Pickett or Willis could provide Fontenot with attractive trade options if the GM is open to moving down in the first round — perhaps with an eye on the 2023 draft.

“Truthfully, next year’s class is going to be stronger and you’ve got to be honest with yourself and say, ‘Am I pushing a guy because I need one or do I really like everything about this guy?’” Dominik said.

Dominik said he believes trading down is “Atlanta’s best move” if Fontenot and Smith aren't sold on Pickett or Willis.

Asked about the possibility of the Falcons drafting Willis, Terrell said Tuesday, “I wish.”

Is that wish based on his friendship or what he believes Willis could bring to the Falcons?

“Definitely relationship, knowing who he is and what type of player he is," Terrell said.

OTHER OPTIONS AT QB

The Falcons were on location for the pro day workouts for Willis, Pickett, Mississippi’s Matt Corral and Cincinnati’s Desmond Ridder. A quarterback could be available with Atlanta's second-round pick, No. 43 overall.

Feleipe Franks is the only quarterback behind Mariota on Atlanta's depth chart. Fontenot says help at the position is coming through the draft, free agency or a trade.

The Falcons released outside linebacker Dante Fowler, who had 4 1/2 sacks in 2021 to lead a defense which ranked last with 18 sacks — 11 fewer than any other team. It wouldn't be a surprise if the team adds edge rushers with more than one draft pick.

Fontenot and Smith won’t embrace the term “rebuilding,” but the GM acknowledged “We’re taking it on the chin this year” in order to build a more stable financial foundation for 2023. Smith insists no one is giving up on winning in 2022.

“I’m really optimistic about what’s going on and the thing we’re building,” Matthews said. “We have high expectations for ourselves this year. There’s no doubt we don’t look at it as a rebuilding year or anything like that.”

Wide receiver is another glaring need for Atlanta following the NFL's suspension of WR Calvin Ridley for the 2022 season as punishment for betting on games last season. Russell Gage signed with Tampa Bay as a free agent, leaving Olamide Zaccheaus as Atlanta's top returning wide receiver with 31 catches last season.

Ohio State's Garrett Wilson, viewed by some as the top wide receiver in the draft, could be a good fit for Atlanta in the first round. It is considered to be a deep draft for wide receivers, so Fontenot could also find talent in the last two days.