25 years ago, the Baltimore Stallions ruled the CFL 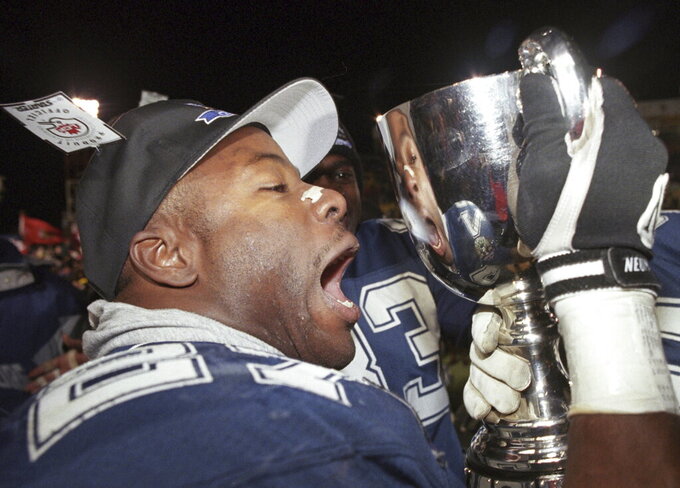 This Nov. 19, 1995 photo shows Baltimore Stallions' Mike Pringle as he prepares to give the Grey Cup a kiss following the Stallions' victory over the Calgary Stampeders, in Regina, Saskatchewan, Canada. Twenty-five years ago, the Baltimore Stallions become the first and only U.S. team to win the Canadian Football League title. The Stallions won their final 13 games in 1995 in what turned out to be the CFL's final season of a three-year run in the U.S. (Tom Hanson/The Canadian Press via AP)

Twenty-five years ago, the Baltimore Stallions become the first and only U.S. team to win the Canadian Football League title.

The Stallions won their final 13 games in 1995 in what turned out to be the CFL’s final season of a three-year run in the United States.

This came after the team started 5-3 and the players gathered at Memorial Stadium for practice. On the same day, player personnel director Jim Popp held tryouts for some 25 players.

“I remember that so vividly, it’s kind of funny but scary at the same time,” star running back Mike Pringle told The Canadian Press. “Sport teaches you great lessons but one of them is everybody is going to be replaced. “

Much was expected from the Stallions. They had reached the 1994 Grey Cup game in their first year of existence, losing 26-23 to the B.C. Lions.

The next year, Baltimore finished first in the South Division at 15-3, tying Calgary for the league’s best record. Pringle was named the outstanding player and Mike Withycombe the top lineman. Don Matthews was coach of the year for a second straight season.

As a U.S. franchise, Baltimore fielded a roster of American players. Several of the CFL’s other American teams struggled badly.

Pringle started his college career at Washington State and transferred to Cal State Fullerton. The 5-foot-9 running back played his first two CFL seasons with Edmonton (1992) and Sacramento (1993) before being dealt to Baltimore.

“When I got to Baltimore, I told my mom that was my last year,” said Pringle, who was inducted into the Canadian Football Hall of Fame in 2008. “I was going to finish the season, but I’d grown tired of not getting the look and time I felt I deserved.”

Playoff wins over Winnipeg and San Antonio sent Baltimore into a Grey Cup showdown with the Calgary Stampeders. The game in Regina, Saskatchewan, featured fierce winds and quarterback Doug Flutie of Calgary.

Baltimore won 37-20 win before a crowd of 52,064. Baltimore quarterback Tracy Ham, who played in college at Georgia Southern, was the MVP after passing for 213 yards and rushing for a TD. The Stallions also got an 82-yard punt return for a touchdown by Chris Wright and a 4-yard scoring run by Alvin Walton off O.J. Brigance’s blocked punt.

The Grey Cup title was the first of three for Pringle, the others coming with Montreal (2002) and Edmonton (2003).

“Your first is always your first,” Pringle told the CP. “I don’t think we were thinking about the historical aspect of it at the time. It was the Grey Cup and the biggest game in Canada for the CFL, and we knew the significance of it.”

The CFL’s American expansion ended after the ’95 season. The Stallions, who drew crowds of more than 30,000 in Baltimore, relocated to Montreal. Pringle and many teammates made the move to Quebec.

“Oh, man, it was bittersweet,” Pringle said. “We’d put together this team that was extremely close and we knew we were all going to be going our separate ways and not be able to try to do this again.”

These days, the CFL is trying to find its way, as are all sports. The pandemic has delayed the start of the season. If there is one, it won’t start until September and could be played with limited or no fans.

Pringle is now 52 and operates a sports nutrition business in Atlanta. He savors the championship season but would prefer that it not be thought of as an American team beating a Canadian one.

“That’s something the players found hurtful that they would make that distinction,” he said. “We were all CFL players going after a CFL championship and I hope that’s what people remember.”