49ers can clinch top seed in NFC with win at Seattle 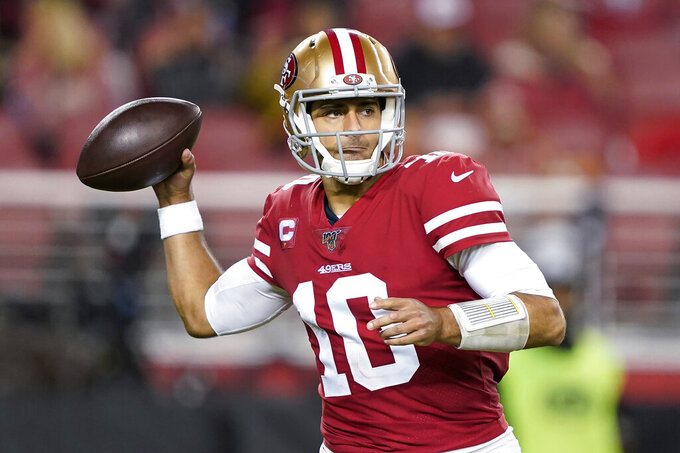 SANTA CLARA, Calif. (AP) — The San Francisco 49ers would have it no other way.

The regular season has come down to this: Win the season finale at Seattle and the Niners will seize the top seed in the NFC playoffs and home-field advantage; a loss would send San Francisco on the road as a wild card.

"That is what you play football for," fullback Kyle Juszczyk said. "These are the kind of games that you dream about when you are a kid. We are really looking forward to that, and it would mean a lot to get the 'W.'"

It won't be easy as the 49ers (12-3) have lost eight straight games in Seattle since winning on Christmas Eve in 2011, including a defeat in the NFC title game following the 2013 season.

The only player left in San Francisco from that last win is left tackle Joe Staley.

But this year's version of the Niners is far different than past years as evidenced by a thrilling win earlier this month in New Orleans or the come-from-behind 34-31 victory Saturday night over the Los Angeles Rams that set the stage for this showdown against the Seahawks (11-4).

The 49ers overcame an 11-point deficit, two interceptions from Jimmy Garoppolo and some defensive breakdowns to win it on Robbie Gould's 33-yard field goal on the final play.

That kick came after Garoppolo converted a pair of third-and-16s on the game-winning drive with completions to Kendrick Bourne and Emmanuel Sanders.

"You just win, whatever it takes," cornerback Richard Sherman said. "Whether it's a point, half a point, quarter of a point, three points, 40, that's a win. That's what we need, especially going down the stretch, you got to win these weird games. You got to learn how to win every way you can. That's what you got to do in the playoffs. This was another great lesson."

Late game offense. Garoppolo shook off an otherwise off-night by going 6 of 8 for 134 yards and a TD on the final two drives of the game. He drove San Francisco 91 yards to the go-ahead TD when he scrambled away from pressure to create time for George Kittle to break open for the touchdown catch. He then set up the winning field goal with a 46-yard pass to Sanders despite getting hit on the arm as he threw. Garoppolo has led four fourth-quarter comebacks this season, also doing it vs. Pittsburgh, Arizona and New Orleans.

Offensive line. With center Weston Richburg sidelined for the season with a knee injury, the Niners have struggled a bit in pass protection, especially on the interior. The Rams' Aaron Donald and Atlanta's Grady Jarrett had lost of success the past two weeks. The Rams put heavy pressure on Garoppolo, beating every lineman at times. Garoppolo was sacked a season-high six times against the Rams and has gone down 22 times the past seven games.

LB Fred Warner. He was everywhere against the Rams, with 11 tackles a pass defensed and an interception returned 46 yards for a touchdown that gave the Niners their first lead of the game. It was Warner's first pick-six since his junior year at BYU and his first interception in two years as a pro.

CB Ahkello Witherspoon. The Rams picked on Witherspoon in coverage throughout the game. Witherspoon was beaten on both of Jared Goff's TD passes: a 10-yarder to Brandin Cooks and a 22-yarder to Cooper Kupp.

S Tarvarius Moore remains in concussion protocol and his status for this week is in question. ... DE Dee Ford is expected to miss one more game with a hamstring injury. ... G Mike Person (neck), S Jaquiski Tartt (ribs) and DT Jullian Taylor all will try to practice this week.

Figuring out how to win in Seattle. The Niners have been outscored by 17 points per game during their eight-game skid in Seattle.