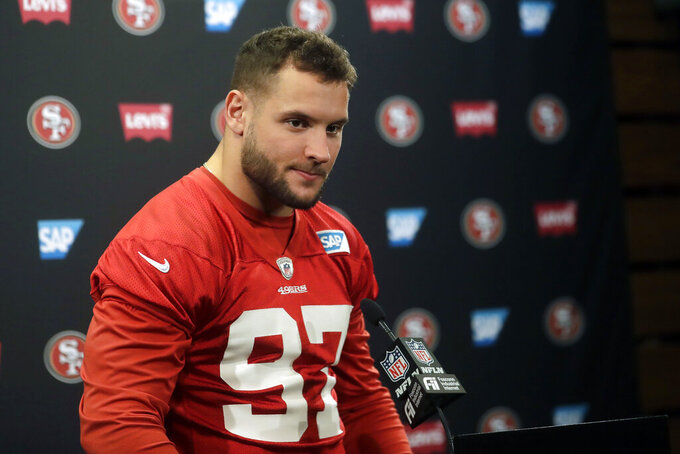 FLE - In this Jan. 23, 2020, file photo, San Francisco 49ers defensive end Nick Bosa speaks at a news conference at the team's NFL football training facility in Santa Clara, Calif. Bosa is doing his best to make an uncertain offseason as normal as possible. Forced to be training back at home in South Florida with his Pro Bowl brother Joey instead of his San Francisco 49ers teammates, the younger Bosa has found a routine amid the COVID-19 pandemic.(AP Photo/Jeff Chiu, File)

Nick Bosa is doing his best to make an uncertain offseason as normal as possible.

Forced to train at home in south Florida with his Pro Bowl brother Joey instead of his San Francisco 49ers teammates, the younger Bosa has found a routine amid the COVID-19 pandemic.

He gets up early to run at a park before the rangers show up, grabs breakfast, lifts weights at a gym his dad owns and spends about an hour a day doing virtual meetings with his position group.

“We’re not able to get out too much, so honestly my body is feeling unbelievable at this point,” Bosa said.

When he’ll be able to show that off on a football field for real remains to be seen. While the NFL tried it’s best for as normal a start to the offseason with free agency starting in March and the draft last month, what’s next remains unknown.

But with team facilities still closed, the offseason program where teams install their systems and start building chemistry is being done remotely.

Everything after that remains in flux since nobody knows for sure whether training camps will open on time this summer, whether the season will start as scheduled on Sept. 10 and whether games will be played in front of fans or empty stadiums.

“Everything is so uncertain right now that I couldn’t say whether I think we’ll be back or not because nobody really knows,” Bosa said. “It seems like everybody is planning on it. I really hope so. I want to play whatever way it is. Obviously, it has to be done the right way. Obviously, these two months a lot answers will come out and hopefully we’ll get back to work.”

Bosa is spending the offseason trying to become an even better player than he was as a rookie when the No. 2 overall draft pick helped transform San Francisco’s defense and lead the 49ers to the Super Bowl, where they fell one quarter short of beating Kansas City for the title.

Bosa’s nine sacks were the fourth most ever for a 49ers rookie, and he ranked third in the NFL with 68 quarterback pressures, according to SportsInfo Solutions, trailing only Cameron Jordan and Danielle Hunter.

He won the AP Defensive Rookie of the Year award and was one of the most dominant players on the field in the Super Bowl, when the 49ers blew a 10-point lead in the fourth quarter and lost 31-20 to Patrick Mahomes and the Chiefs.

“Just like any loss, it stings for a while and then you eventually get over it and realize that life goes on and you don’t get another crack at it,” he said. “When it’s that close, it makes it even harder.”

Bosa expects more out of himself this season, saying he will try not to “waste” as many pass rushing opportunities as he did last season and eliminate some of the “silly mistakes” typical for a rookie.

He will also have more responsibility on his plate with the trade of star defensive tackle DeForest Buckner, who was the leader on the defensive line by making the third-down calls on the field and setting the tone with his relentless effort.

Buckner was one of three key veterans who are gone along with left tackle Joe Staley and receiver Emmanuel Sanders. But most of the core of the team is back for another run at a title, counting on even more from last year’s productive rookie class led by Bosa, receiver Deebo Samuel and linebacker Dre Greenlaw.

“We’re not just deer in headlights anymore,” Bosa said. “We know the routine, we know how an NFL season works. Now we can really just take the next step and work on honing our game and studying our opponents now that we’ve played them once.”