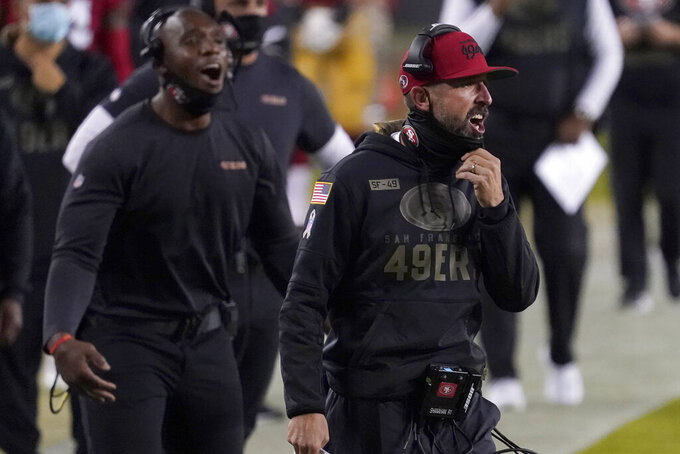 SANTA CLARA, Calif. (AP) — The San Francisco 49ers are expecting to get back significant reinforcements after their bye week.

Coach Kyle Shanahan said Tuesday he’s hopeful that leading rusher Raheem Mostert, No. 1 receiver Deebo Samuel, and star cornerback Richard Sherman will all be back for the game Nov. 29 against the Los Angeles Rams after they all missed time with injuries.

Backup running back Tevin Coleman and reserve linebacker Demetrius Flannigan-Fowles also could be back for the Rams game, while running back Jeff Wilson Jr. and linebacker Mark Nzeocha may need to miss one more game before returning.

“That’s going to help big and that’s some juice we need, but we also don’t have much room for error with where our record is right now,” Shanahan said. “So I can’t count on those guys just to come in and change everything. I just want those guys to get healthy and be a part of it. But we need to really make sure that this week makes us better, not just rested, but makes us better.”

Sherman has been out since hurting his calf in the season opener. Mostert has missed the past four games with an ankle injury after missing two earlier in the year with an injured knee. Samuel has been out three games with a hamstring injury.

With starting quarterback Jimmy Garoppolo out at least a few more weeks with a sprained ankle and All-Pro tight end George Kittle sidelined possibly for the season with a broken foot, the Niners (4-6) have struggled a year after making it to the Super Bowl.

But the return of some of those key players next week gives San Francisco a chance to make a late-season run.

“We’re not going to win just because these guys are coming back,” Shanahan said. “These guys haven’t played football in a while. Usually when they do come back, it takes them a week or two to get into it and to really affect the game. We’re going to win based off whether the guys that we have get better or worse."

This bye week is a little different than usual for the 49ers, especially after defensive lineman Arik Armstead was placed on the COVID-19 list Monday following a positive test.

That forced the team to close its facility this week, leading to virtual meetings Tuesday. Players aren’t allowed to leave town on the bye week this season because they must take daily coronavirus tests at the team facility.

The Niners are planning to have outdoor only workouts Friday and Saturday before returning for good next week to begin preparing for the Rams game.

NOTES: Shanahan said the 49ers plan to put in another waiver claim on former Falcons DE Takk McKinley, who was claimed by Cincinnati last week but released after failing a physical. ... The 49ers placed S Johnathan Cyprien (hamstring) and RB JaMycal Hasty (collarbone) on IR. Cyprien could be back after three weeks, but Hasty will miss the rest of the season. ... S Jared Mayden (quadriceps) was placed on the practice squad IR list.