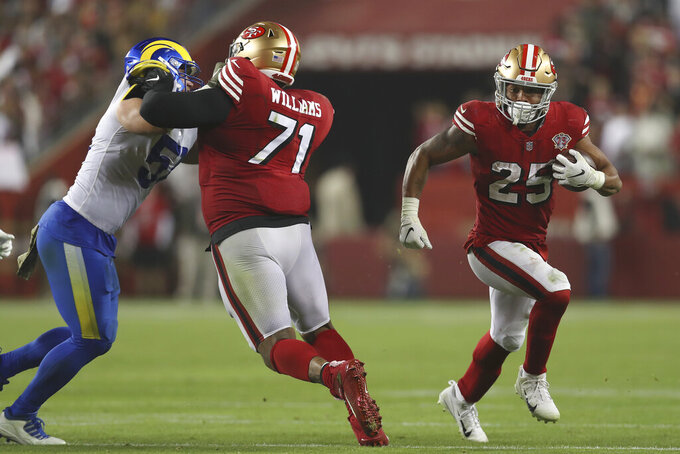 SANTA CLARA, Calif. (AP) — The San Francisco 49ers turned back the clock in strategy and execution and showed off the formula they might need if they want to contend for the playoffs in the second half of the season.

The Niners once again played like the team that won the NFC in 2019, running the ball 44 times and using a strong defense to beat the Los Angeles Rams 31-10 on Monday night.

“Honestly, it felt like pretty similar to the Super Bowl year,” quarterback Jimmy Garoppolo said. "It felt like we ran the ball 30 times every time that year. It’s just when we can do that, and be successful on third down, it’s a good recipe for us.”

Coach Kyle Shanahan had set the audacious goal of 40 carries in the game for the Niners (4-5), who were coming off an 11-run performance in a 31-17 loss to Arizona that featured the fewest runs in his five years at the helm.

But he felt good about the benchmark after San Francisco ran the ball 12 times on an opening 18-play drive that was capped by a TD pass from Garoppolo to George Kittle that set the tone for the game.

San Francisco ran the ball 40 times in a game four times in the 2019 regular season and then in back-to-back playoffs wins to get to the Super Bowl.

They hadn't been able to do that since as struggles on third down made mounting long drives difficult and the defense struggled to get takeaways.

That contributed to the five losses in six games that sent the Niners back toward the bottom of the NFC standings.

But the win against the Rams vaulted them back into contention, a half game behind Carolina for the seventh playoff spot in the NFC.

Deebo Samuel the running back. The Niners offense has revolved heavily around Samuel all year as he ranks second in the NFL in yards receiving at 979. But Shanahan unveiled a new wrinkle against the Rams, handing Samuel the ball as a running back out of the backfield on a few occasions. He lined up six times as a back — nearly matching his total of seven from the first eight games — and delivered five carries for 36 yards and a TD.

Trey Lance. The third overall pick was a spectator once again as Garoppolo has seized a grip on the quarterback spot. Lance hasn't even been used in a situational role in three games since returning from a knee injury and hasn't taken a snap since losing his only start on Oct. 10 at Arizona.

RT Jaylon Moore left the game with a knee injury and is day to day. ... RB Elijah Mitchell broke his finger in the game and had a procedure Tuesday. Shanahan is hopeful he can practice Wednesday and play this week. ... Samuel (bruised shin) is day to day.

96%. Garoppolo has been used almost exclusively out of the shotgun the past three weeks, with 96% of his drop backs coming from the shotgun, according to NFL NextGen stats. That compared to a rate of 66% for the rest of his career with the Niners. That has taken advantage of his quick release and cut down on play action, but the overall results have been good as he leads the league with a 109.8 passer rating in that span.

The 49ers visit Jacksonville on Sunday.