49ers have tough task to repeat in improved NFC West 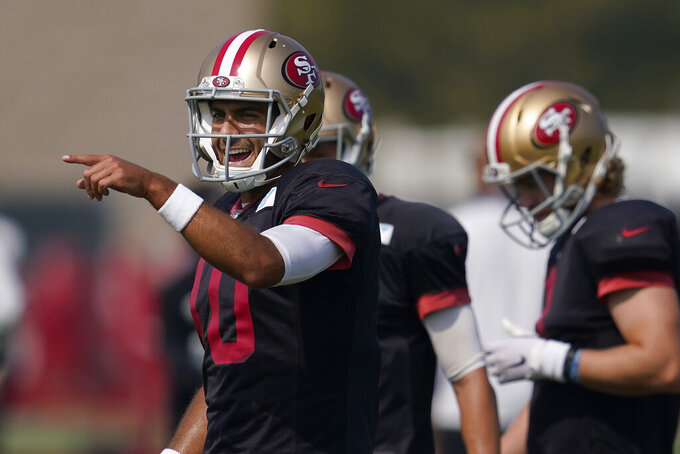 SANTA CLARA, Calif. (AP) — As remarkable as the one-year turnaround from four wins to a Super Bowl appearance might have been for the San Francisco 49ers, repeating the feat could be even harder.

Especially considering the competition in the NFC West.

While the Niners spent the offseason stewing over the fourth-quarter collapse in the Super Bowl and filling holes created this offseason, their competition in the division did their best to close the gap.

Arizona added one of the game’s most productive receivers in DeAndre Hopkins to team with emerging star quarterback Kyler Murray in what could be one of the most dynamic offenses in the league.

Perennial contender Seattle made a blockbuster deal for one of the game’s top safeties, acquiring Jamal Adams from the New York Jets for a package that included two first-round draft picks.

Meanwhile, the Niners must hope that rookies Brandon Aiyuk and Javon Kinlaw can fill in for established veterans Emmanuel Sanders and DeForest Buckner, while left tackle Trent Williams has no rust after sitting out last season as he replaces the retired Joe Staley.

Perhaps more importantly, the returning players can’t slip up at all after big performances last year led to a 13-3 record. San Francisco does have something of an edge in continuity during this pandemic-stricken season: The 49ers return more snaps than any other team.

Here are some things to know about the NFC West:

No team has run the ball a higher percentage of time in the first three quarters the past two seasons than the Seahawks — despite having one of the top QBs in the game in Russell Wilson.

That run-heavy approach contributed to Seattle falling behind at the half in 10 games last season. Wilson’s playmaking ability turned six of those deficits into wins, tied for the second most in a season for a team trailing at the half.

That helped Seattle come within inches of beating San Francisco in the season finale and winning the division. With two dynamic receivers in Tyler Lockett and DK Metcalf, the Seahawks have the ingredients to unleash Wilson even earlier in games so they aren’t always trying to come from behind.

If the Seahawks can play with the lead, a secondary led by Adams, Quinton Dunbar, Quandre Diggs and Shaquill Griffin should make it hard for other teams to come back.

After blowing a 10-point fourth quarter lead in a Super Bowl loss to Kansas City, the Niners will try to do what so many runners-up have failed at and win it all the following year. Only three teams have bounced back from the disappointment of a loss in the Super Bowl to win it all the following year, with Dallas and Miami doing it in back-to-back seasons in 1971-72, and then the New England Patriots again in 2018.

Eight other Super Bowl losers returned to the game the next season only to lose again, including Buffalo three times. But 15 of the past 33 teams that lost in the Super Bowl failed to even make it back to the playoffs the following year, including the Rams last year.

But with Jimmy Garoppolo in his second full season as a starter, dynamic players such as All-Pro tight end George Kittle and 2019 Defensive Rookie of the Year Nick Bosa, and a higher share of returning players than any other team, the Niners feel like they can buck that trend.

“As weird as an offseason as it was, we came back and everyone was ready to roll,” Garoppolo said. “You could tell that everyone had a good offseason. You could tell guys were putting in the work, guys came prepared, ready for training camp. That’s really the type of team we have.”

In each of the past three seasons, a second-year quarterback has taken a major leap to becoming one of the best in the NFL. Arizona’s Murray could be the next to follow the path set by Carson Wentz, Patrick Mahomes and Lamar Jackson.

Murray did so well as a rookie — throwing for 3,744 yards and 20 TDs, while running for 544 yards and four more scores — that he won Offensive Rookie of the Year honors. But he also faltered a bit down the stretch.

He should have more help this season with Hopkins added to a receiving core that already included veteran Larry Fitzgerald and promising youngster Christian Kirk. A full season from running back Kenyan Drake should make coach Kliff Kingsbury’s offense even tougher to defend.

The big questions remain on defense, where No. 8 overall pick Isaiah Simmons’ versatility should provide a big boost.

While Seattle and Arizona were making big-name additions, the Rams shed more of the pieces that helped them reach the Super Bowl following the 2018 season.

Coach Sean McVay still has some star power for the first season at the $5 billion SoFi Stadium, led by defensive tackle Aaron Donald and cornerback Jalen Ramsey to pair with quarterback Jared Goff to give the Rams the potential to be a threat.