49ers look to bounce back vs. Jets after tough opening loss 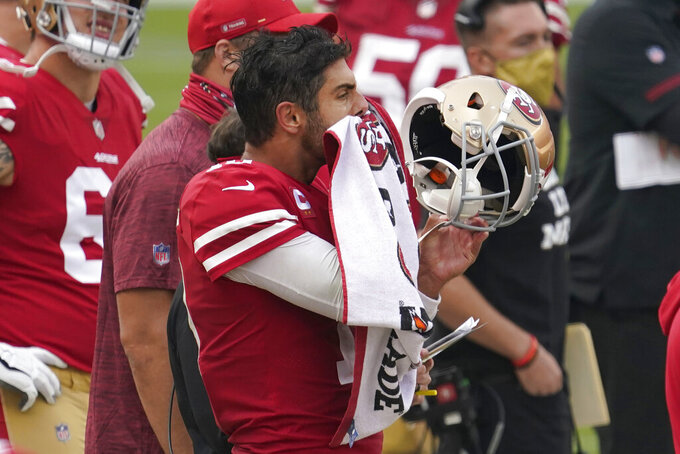 San Francisco 49ers quarterback Jimmy Garoppolo reacts on the sideline during the second half of an NFL football game against the Arizona Cardinals in Santa Clara, Calif., Sunday, Sept. 13, 2020. (AP Photo/Tony Avelar)

EAST RUTHERFORD, N.J. (AP) — The San Francisco 49ers are heading across the country banged up and bitter after blowing a fourth-quarter lead in their season opener.

The defending NFC champions are 0-1 — and will try to avoid a two-game skid to start the year when they face the hapless New York Jets at MetLife Stadium on Sunday.

“We’ve just got to move on, get to Week 2 and get this thing rolling now,” quarterback Jimmy Garoppolo said. "You’ve got to deal with the situation that you’re given and control what you can control.”

For the 49ers, it’s about not letting another late lead slip through their hands, as they did in a 24-20 loss to Arizona last Sunday. They became the first Super Bowl runner-up to lose a season opener since Carolina fell 21-20 to Denver in 2016. San Francisco will also try to avoid becoming the first to start 0-2 since Seattle in 2015.

(For more in-depth coverage of the NFL, listen to the AP Pro Football Podcast apple.co/3iGiX8a )

While the Jets looked awful in a 27-17 loss at Buffalo last Sunday, a victory at the Meadowlands might not be such a sure thing for the 49ers who are dealing with numerous injuries. Cornerback Richard Sherman (calf) is out, tight end George Kittle (knee) is uncertain to play, and wide receivers Deebo Samuel (foot) and Brandon Aiyuk (hamstring) didn't play in the opener.

“We’ve dealt with this before," Garoppolo said. “I think every team, you’ve got to deal with your injuries. Next man up mindset."

The Jets know exactly what the 49ers are dealing with. They'll be without star running back Le'Veon Bell (hamstring), who's on injured reserve, and leading receiver Jamison Crowder is uncertain to play after also injuring his hamstring.

That will put even more strain on quarterback Sam Darnold, who struggled mightily in the opener with his mechanics, footwork and decision-making. He finished 21 of 35 for 215 yards with a touchdown and an interception, but those numbers were largely padded by a strong final drive.

“My timing needs to be better,” Darnold said. “I think I did hurry some things. I feel like just at the beginning of a game I’ve just got to relax and take a deep breath, ease myself into it and make the throws when they’re there.”

The Niners will be missing a key piece on defense after placing Sherman on injured reserve. He was by far the most dependable part of the secondary last season for a team that allowed the fewest yards passing in more than a decade.

Emmanuel Moseley struggled across from Sherman in the opener. There are questions about the other starter with Ahkello Witherspoon trying to get back from a concussion.

The 49ers have lost all three games Sherman has missed the past two seasons, allowing nearly 10 points more per game and a passer rating that is 11 points higher without him.

“I know guys are ready to step up,” linebacker Fred Warner said. “I think guys are ready and if we put the right week of practice in like we know we should, we should be firing on all cylinders this week.”

Niners coach Kyle Shanahan remembers studying Frank Gore’s college film back when he was getting his start in the NFL as a quality control coach in Tampa Bay in 2004.

Gore is still going 16 years later and is set to get the start for the Jets this week against the team that drafted him in 2005. The 37-year-old Gore is the third-leading rusher in NFL history.

“I loved him then, I loved him every year,” Shanahan said. “He runs so hard. The guys that run that hard very rarely can play to his age, which just shows how dedicated he is, how much of a football player he is and obviously extremely talented, but he’s a special dude.”

One of the few bright spots for the Jets against Buffalo was the play of safety Marcus Maye, who stepped into the role Jamal Adams played before he was traded this summer to Seattle.

Maye was all over the field, racking up 10 tackles, two sacks, a forced fumble, two passes defensed, two tackles for loss and two quarterback hits.

“Talk about a guy that probably did everything imaginable at the safety position,” Jets coach Adam Gase said. “I don't think there's many guys that could do what he did this last week, as far as the variety.”

Running back Raheem Mostert played a big part in the 49ers' run to the Super Bowl last season, rushing for 773 yards and 12 TDs in his final 10 games in the regular season and postseason combined. He did all that work as a backup but made the most of his first career start in Week 1.

He had 151 yards from scrimmage and scored on a 76-yard TD pass, showing off his improved receiving skills.

“Raheem has grown in every aspect,” Shanahan said. “He gets better and better the more opportunities he gets. He got a real good opportunity on that look Sunday and did what he was capable of and that was a house call. So, it was awesome.”