49ers look to show off new offense vs. Chargers 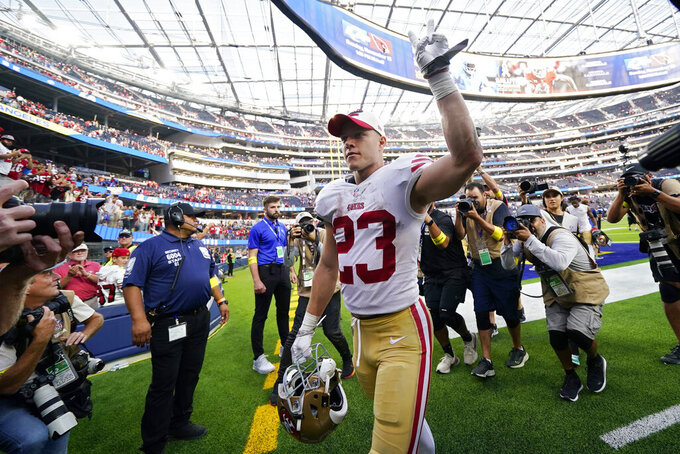 San Francisco 49ers running back Christian McCaffrey waves to fans as he walks off the field after the 49ers defeated the Los Angeles Rams 31-14 in an NFL football game Sunday, Oct. 30, 2022, in Inglewood, Calif. (AP Photo/Ashley Landis) 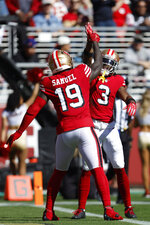 SANTA CLARA, Calif. (AP) — San Francisco coach Kyle Shanahan has been known as one of the NFL's most creative play-callers.

The midseason addition of Christian McCaffrey has only expanded the possibilities for the 49ers, who now feature two of the game's most versatile players in McCaffrey and Deebo Samuel.

“It’s just like so crazy how much firepower we have in this offense now, adding him to the team along with all the other guys that we have on our team,” Samuel said. “It's going to be crazy. It's going to be hard to cover everybody out there. It will be real fun.”

The first defense that will have to contend with the dynamic duo will be the struggling Los Angeles Chargers (5-3), who head into Sunday night's showdown with the 49ers (4-4) having allowed the third-most points in the NFL and a league-worst six runs of at least 40 yards.

“That’s where the game is now, to have those type of chess pieces," Chargers coach Brandon Staley said of a Niners' offense featuring McCaffrey, Samuel and tight end George Kittle.

“These guys can line up anywhere and they can do a lot of different things. They can catch the ball, they can run the ball, they can block. You need to have players on your team that can mirror that and you can use your players as chess pieces to be aggressive.”

The 49ers have shown glimpses of the possibilities since acquiring McCaffrey in a trade from Carolina two days before playing the Chiefs in Week 8.

McCaffrey had a limited role in his first game with San Francisco but was the focal point of the offense the following week when Samuel was out with a hamstring injury. McCaffrey had 149 yards from scrimmage and had a TD run, pass and catch in a win over the Rams.

Now with Samuel set to return this week following a bye, the Niners can show off their new offense.

“It’s exciting and fun to be a part of,” McCaffrey said. “The other day, I was in the huddle, I was kind of smiling, looking around like there’s some really good players in this huddle. Obviously Deebo, you can line him up anywhere and he’s elite anywhere you put him. So it definitely puts a lot of stress on the defense. I’m lucky and happy to be able to suit up on the same team.”

With receivers Keenan Allen playing in only two games and Mike Williams about to miss his second one, offensive coordinator Joe Lombardi and quarterback Justin Herbert have seen their downfield options nearly disappear.

Herbert has gone four straight games without going over 300 yards and hasn’t completed a pass longer than 20 yards in the air in the past three. Joshua Palmer is the only intermediate to deep threat, and he might start seeing more double coverage after having eight receptions for 106 yards last week.

The Chargers are likely to go with another grind-it-out passing game, where Herbert makes a lot of underneath passes and hopes that his receivers or running back Austin Ekeler can generate yards after the catch.

The first NFL meeting between the Bosa brothers will have to wait, with LA's Joey on injured reserve after undergoing core muscle surgery similar to the one that sidelined San Francisco's Nick in college.

Nick Bosa said their mother, Cheryl, still plans to attend the game in a split Chargers-49ers jersey, but he's sad his brother won't be able to play.

“I’ve watched them for seven to eight years now and I definitely have cheered for them for a long time, for Joey,” Nick Bosa said. “It’s going to fun to play them. I wish he was out there. But I think I have a good idea of their offense.”

If Nick Bosa gets at least a half-sack, the family will reach the 100 mark, with Joey coming into the game with 59 1/2 in his career, Nick with 33 and father John with seven.

Right tackle Mike McGlinchey knows many 49ers fans would have rather gotten a different player in the 2018 draft. San Francisco picked McGlinchey ninth overall in that draft and he has been a capable starter for most of his five years.

Niners fans will get the chance to see the player many of them wanted when safety Derwin James visits with the Chargers. James was picked 17th overall and has developed into one of the top safeties in the league.

“Most people wanted him here and not me, if I remember correctly,” McGlinchey said. “So sorry for the socks and underwear that they got for Christmas in 2018.”