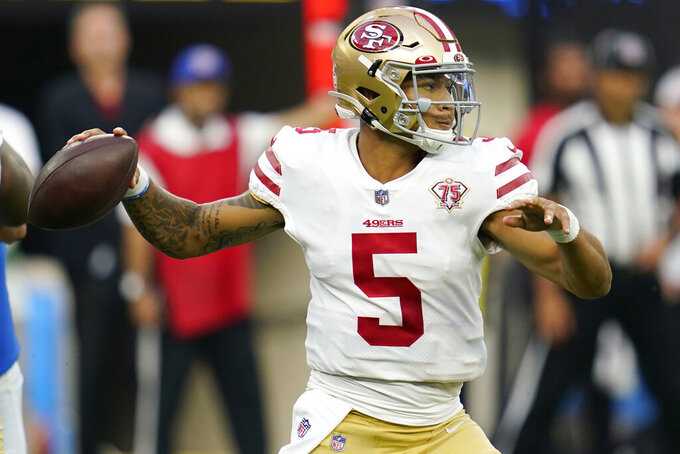 SANTA CLARA, Calif. (AP) — The San Francisco 49ers lost two depth players on defense to injuries that could impact their decisions as they prepare to cut down the roster before the regular season.

Defensive tackle Maurice Hurst suffered a high ankle sprain and linebacker Mychal Kendricks came down with turf toe during an exhibition victory over the Los Angeles Chargers on Sunday.

Neither player is expected back until after the start of the regular season on Sept. 12 at Detroit, leaving the Niners with some questions about whether to keep them on the active roster until the cut-down day next week.

“Any time you have an ankle and a toe, you’re looking at at least a month,” coach Kyle Shanahan said Monday. "So that’s something we’re definitely going to have to discuss today, how it plays out for the final roster spots. What we have to do to get through the next week or so. That stuff we want to discuss by the end of the day and we’ll have a decision by tomorrow.”

San Francisco must reduce its roster from 85 players to 80 on Tuesday and then down to 53 by Aug. 31. To be eligible for the short-term, three-week injured reserve during the season, a player must be on the initial 53-man roster.

Hurst was signed this offseason after getting cut by the Raiders and was expected to add another pass-rushing option on the interior. He had fared well in training camp and in limited action in exhibition games and could be kept on the roster before going on IR.

Kendricks was signed last week for veteran depth at linebacker.

The Niners are treating their final preseason game Sunday as their dress rehearsal for the regular season with many of the starters who have sat out the first two weeks getting a chance to play.

San Francisco has held out about 20 players in each of the first two games, including stars like tight end George Kittle and linebacker Fred Warner.

“Right now, my plan is to use them,” Shanahan said. "It’s still early, though. ... We’re going to get a normal week of practice in Wednesday, Thursday, Friday. Stuff could always change based off of practice and how it goes, but for the most part, I’d like to get everyone playing a little bit.”

The Niners also plan to once again split time at quarterback between Jimmy Garoppolo and rookie Trey Lance. Garoppolo has played only one series in each of the first two weeks. Shanahan planned to give Garoppolo two drives against the Chargers but changed up after the first one went 15 plays before ending with an interception.

Lance came in and struggled early, generating one first down and throwing one interception on his first three drives.

But he rebounded to throw two TD passes on his final three drives and Shanahan saw improvement from the first to the second preseason game.

“I think anytime you get thrown into the heat of battle, especially these younger guys that haven’t played a lot, you always kind of resort to what you’ve done and your technique gets off a lot,” he said. "He did that a ton in the first game. I thought it was much better in the second game and hopefully he’ll continue to get better in this third game.”

Shanahan hasn't committed to a Week 1 starter at quarterback but said nothing has changed since the start of camp when Garoppolo was penciled in for that role.