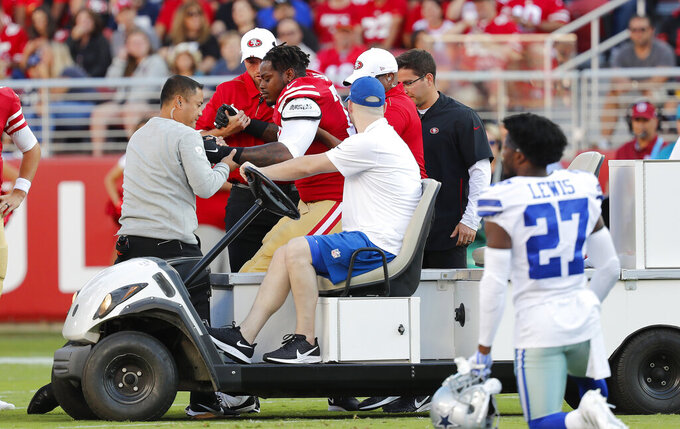 SANTA CLARA, Calif. (AP) — San Francisco 49ers tackle Shon Coleman will be placed on season-ending injury reserve with a serious injury to his right leg suffered in the exhibition opener.

Coleman had surgery Sunday for a broken fibula and dislocated ankle suffered in the first quarter of Saturday night's 17-9 victory over the Dallas Cowboys. Coach Kyle Shahanan said Coleman will be placed on injured reserve Monday and the team plans to bring in tackles to work out to fill his spot on the roster.

The Niners lost three other players to injuries in the game with linebacker Elijah Lee expected to miss two weeks after undergoing surgery Sunday on his thumb, defensive tackle D.J. Jones week to week with a sprained knee and running back Raheem Mostert in concussion protocol.

The most serious injury came to Coleman on San Francisco's opening drive of the exhibition season when teammate Najee Toran fell into his leg on a running play. His leg was placed on an air cast on the field and Coleman was taken off on a cart.

Coleman was projected to be the backup swing tackle to starters Joe Staley and Mike McGlinchey, leaving a void at that spot going forward.

The Niners rested their entire projected starting line on Saturday. Sixth-round rookie Justin Skule struggled at times at right tackle and Willie Beavers was overmatched after stepping in for Coleman at left tackle. Beavers was called for three holding penalties in the game. Christian DiLauro also got playing time and was called for a false start and hold as San Francisco was penalized 18 times for 216 yards.

"You have to play better," Shanahan said. "Guys sometimes hold when they get beat. When you get beat, you can't hold. You have to let it go so you don't lose 10 yards. Sometimes you have to get into better position so you aren't beat and you don't have to hold."

Coleman was a third-round pick by Cleveland in 2017 and was acquired in a trade last summer by San Francisco. He spent the entire season on the 53-man roster but was inactive every game.

In other injury news, Shanahan said safety Jimmie Ward will have X-rays this week to determine whether he's ready to be activated from the physically unable to perform list after breaking his collarbone during the offseason program.