49ers move practice to quiet stadium to prepare for opener 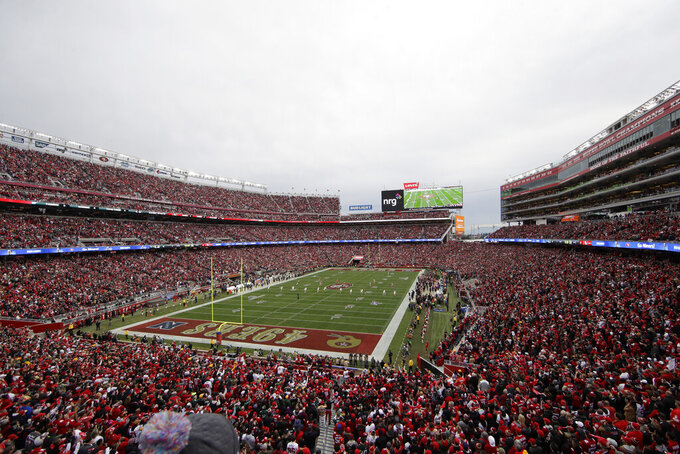 FILE - In this Jan. 19, 2020, file photo, fans at Levi's Stadium watch as the Green Bay Packers kickoff to the San Francisco 49ers during the first half of the NFL NFC Championship football game in Santa Clara, Calif. The San Francisco 49ers will play their season opener without fans in attendance because of the COVID-19 pandemic. The team said Tuesday, Aug. 25, 2020, after consulting with local officials that the Sept. 13 game against Arizona at Levi’s Stadium will be played without spectators. The team said it would work with state and county officials to determine whether it will be safe to allow fans to attend games later this season. (AP Photo/Jeff Chiu, File)

SANTA CLARA, Calif. (AP) — The San Francisco 49ers returned to the field at Levi’s Stadium for the first time since winning the NFC championship game there for a run-through before the season opener in a little more than two weeks.

Coach Kyle Shanahan moved practice to the stadium for the first time this summer Friday to provide a test run for communications and other issues because the team won’t play any preseason games before the opener Sept. 13 against Arizona.

The practice consisted mostly of 11-on-11 situational drills, with the defense getting the better of the matchup capped by a couple of late pass breakups by Jason Verrett in the empty and quiet stadium.

The Niners won’t have fans at least for the opener and likely beyond that because of the COVID-19 pandemic. The NFL has talked about the possibility of having taped crowd noise, but with nothing finalized Shanahan opted for the silent approach instead.

“I wanted to use the noise, but we don’t know exactly the rules on that yet,” Shanahan said. “I don’t want to experiment with that until we know. We experimented with a silent practice. That might be how the games are. So we got that experience down. It is what it is. I don’t think there’s a big advantage or disadvantage to it. Everyone’s in the same boat with that. It’s just guys getting used to it.”

Quarterback Jimmy Garoppolo said it definitely felt weird to be in a quiet stadium and said just looking at the empty seats was an adjustment.

He said he didn’t have an opinion on whether there should be fake crowd noise or a quiet stadium when games start next month.

“It’s what it’s going to be,” Garoppolo said. “Having you guys out there as reporters is probably the most fans we’ll have at home games this year. It’s just something you have to get used to. It’s out of our control.”

The coaches could be clearly heard throughout the stadium with defensive line coach Kris Kocurek often yelling at his group and an exasperated Shanahan telling the first-team offense to get off the field at one point.

But Shanahan said he’s not worried about the opposing team being able to hear any secrets if the games are played with no noise.

“I’m probably more concerned about saying something, the wrong type of word and it being on TV more than the coaches hearing us on the other side,” he said. “But it’s awkward to be playing football in a silent place. We don’t even do that at practice. We have music playing at practice.”

NOTES: The scoreboard at the stadium had the message “Black Lives Matter” throughout practice. ... TE George Kittle was held out of practice with tightness in his hamstring and is day to day. ... Jordan Reed got his most extensive work in team drills and made some nice plays, including one TD catch from Jimmy Garoppolo. ... Shanahan said he’s still hopeful DL Ronald Blair will be able to play Week 1. He is on the physically unable to perform list after going down with a season-ending knee injury last November. ... RB Tevin Coleman said he had offseason surgery after dislocating his shoulder in the NFC title game. Coleman played through the injury for the Super Bowl.