49ers must exhibit patience with no 1st round pick 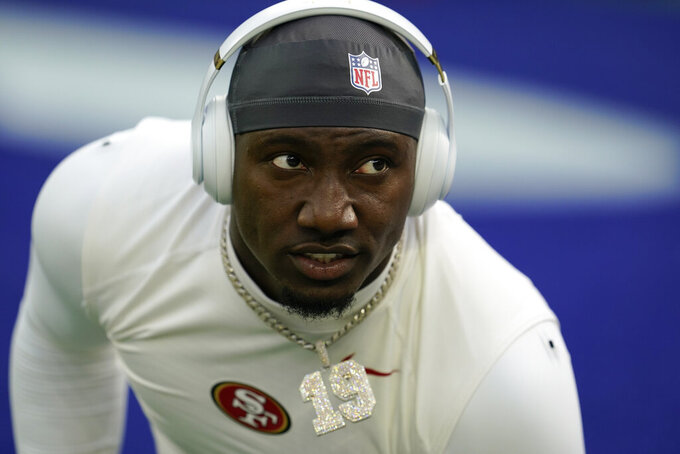 FILE - San Francisco 49ers wide receiver Deebo Samuel (19) warms up before an NFL football game against the Los Angeles Rams, Sunday, Jan. 9, 2022, in Inglewood, Calif. All-Pro receiver Deebo Samuel told ESPN that he has requested a trade from the San Francisco 49ers as the two sides have been unable to negotiate a long-term deal for one of the league's top playmakers. (AP Photo/Marcio Jose Sanchez, File)

That's what will make this year's opening night of the draft so unusual for the Niners, who won't have an opening-round pick for the first time since 1996 after trading it last March to move up to take Trey Lance third overall to be their quarterback of the future.

San Francisco's first pick next week will be 61st overall in the second round, barring a trade.

“Everyone talks, ‘We don’t have a first-round pick,’ and we’re not used to that,” general manager John Lynch said earlier this offseason. "But I think when people ask me what’s the signature of this draft, it’s the depth of it. So it’s a good year to have it. I like that we have nine picks. I think it’s a good year to exhibit patience … It sets up well for where we’re at.”

The verdict on the decision to trade three first-round picks for Lance hasn't been rendered yet as he started only two games as a rookie when San Francisco went to the NFC title game with Jimmy Garoppolo as the starting quarterback.

Garoppolo is still around: San Francisco was unable to trade him this offseason after he underwent shoulder surgery. Garoppolo is expected to be with the Niners for the start of the offseason program but he still could be traded either at the draft or later in the offseason as Shanahan remains committed to Lance as the future starter.

“We brought Trey here to be that eventually, and I think that will be sooner than later," Shanahan said.

All-Pro receiver Deebo Samuel told ESPN he has requested a trade, which could alter the draft plans for San Francisco. The Niners could give into the demand and deal Samuel for a pick that could get them a replacement in the first round. If they don't make a deal, the 49ers could look to add a receiver later in the draft for depth in case they end up moving on from Samuel later this offseason or when his contract is up at the end of the season.

San Francisco was fairly quiet in free agency, with the most significant move the signing of former Chiefs cornerback Charvarius Ward. Most of the other moves focused on adding depth to the defensive line and upgrading special teams.

That leaves the biggest need heading into the draft at guard, where starter Laken Tomlinson left in free agency, leaving 2021 second-rounder Aaron Banks and Daniel Brunskill as the leading contenders to start. But Banks was unable to get on the field much as a rookie, and Brunskill was overmatched at times and could be better suited to a reserve role in which he could play both tackle and guard.

The Niners also could use help at safety with long-time starter Jaquiski Tartt still unsigned as a free agent, along with center and right tackle.

The Niners are unsure 36-year-old center Alex Mack will return for another season, but no matter what he decides the team still could look for a long-term option there. Mike McGlinchey, the No. 9 overall pick in 2018, is playing out his fifth-year option at right tackle and coming off a season-ending quadriceps injury. So adding depth there could be an option.

Despite the missing picks from the Lance trade, the 49ers are expected to be busy on the second and third days of the draft. San Francisco got five compensatory picks for losing free agents, along with special picks for losing Robert Saleh to coach the Jets and Martin Mayhew to take over as GM in Washington.

One of those picks went to Miami in the Lance deal, but San Francisco will still have one second-round pick, two thirds, one fourth, one fifth, three sixths and one seventh.

This would be the first time since 1996 that the Niners won't make a pick in the first round after using that pick the previous year to trade up for receiver J.J. Stokes. San Francisco's first pick that draft didn't make much of an impact with second-round defensive end Israel Ifeanyi playing just three career games. But the 49ers did come away with a star that year, taking Hall of Fame receiver Terrell Owens in the third round.