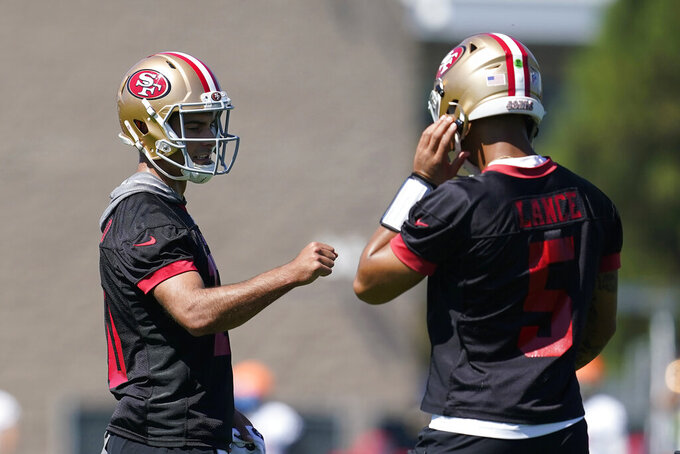 SANTA CLARA, Calif. (AP) — Before the news about Jimmy Garoppolo staying in San Francisco as the backup quarterback became public last week, 49ers coach Kyle Shanahan gathered a group of his team leaders in his office to explain the situation.

Shanahan told them he and general manager John Lynch had talked it over with Garoppolo and starter Trey Lance and believed that keeping Garoppolo as an experienced backup on a reduced contract would ultimately help the team.

While the situation may seem awkward — and nearly unprecedented — on the outside, the Niners believe the personalities of the two quarterbacks and the leadership in the locker room will make sure it doesn't cause a problem.

“I think the core nucleus of the guys that we have here and the culture that we’ve established over the last five or six years with Kyle and John, our locker room is in a position where we can handle things like this and it doesn’t derail our focus or our enthusiasm,” offensive tackle Mike McGlinchey said Monday.

“Because of that it’s seamless and everybody’s excited about it, excited to keep our friend in the building and also help a guy that’s immensely talented and help us win games. At the end of the day, that’s all it’s about is just winning games. I think having both of them here helps us do that.”

After Garoppolo spent the offseason away from the team rehabilitating from offseason shoulder surgery and training camp throwing on his own on a side field and not attending meetings, he got back into the fold last week.

He agreed to reduce his 2022 salary from a non-guaranteed $24.2 million to a guaranteed $6.5 million with the chance to make about $9 million more in roster and playing time bonuses.

The move came after no team was willing to trade for Garoppolo and give him a chance to start. It also makes him the first QB in 30 years to start in a conference title game one season and begin the next as a healthy backup on the same franchise the following season.

It happened in 1992 in Detroit when Erik Kramer backed up Rodney Peete after making a playoff run in place of an injured Peete in 1991.

This scenario is far different and McGlinchey calls it a “win-win” situation that puts Garoppolo in the best situation long term, provides support for Lance and gives the Niners a capable backup after having QB injuries derail the 2018 and 2020 seasons.

“I think it's another insurance policy for us,” McGlinchey said. “We’ve been around this building when we’ve lost the starting quarterback for a whole season or for a couple of games, and how that can really change the face of a football season. It’s no secret that Jimmy’s a really good player. It just gives us that little bit of insurance if something does happen to Trey. So I think everybody’s for it.”

All-Pro left tackle Trent Williams said he was happy to have Garoppolo back, calling him a brother whom he loves after spending two seasons together.

Williams said he was surprised this worked out the way it did, but not because he didn't think Garoppolo would be willing to stay as a backup.

“I was surprised that nobody stepped up and made him their guy,” he said. “That surprised me more than anything. But him knowing what he was looking against and choosing to come back here that was probably the go-to answer. I would assume that he would do that knowing the circumstances. But I expected him to be somewhere as a starting quarterback.”