49ers prepared for 'bumps in the road' on 3-week trip 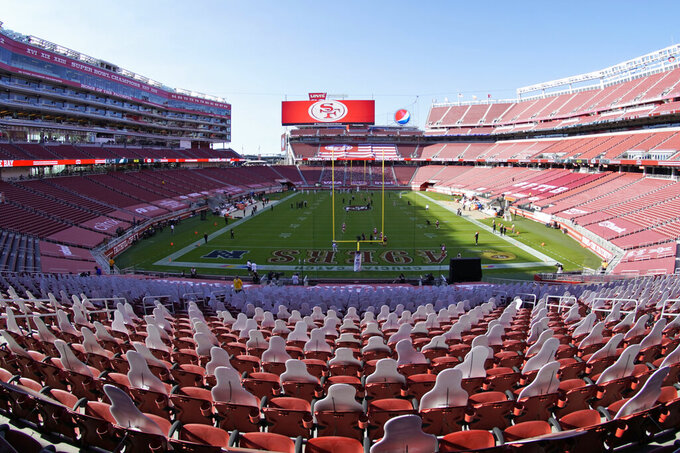 This Oct. 4, 2020, file photo, taken with a fisheye lens, shows an empty Levi's Stadium before an NFL football game between the San Francisco 49ers and the Philadelphia Eagles in Santa Clara, Calif. The 49ers and other teams may need to find a temporary new home after Santa Clara County on Saturday, Nov. 28, 2020, banned all contact sports from holding games and practices for the next three weeks. County officials issued the directives in response to rising cases of the coronavirus in the area. The rules take effect Monday and will last for three weeks. (AP Photo/Tony Avelar, File)

The San Francisco 49ers are set to embark on an unusual three-week road trip after being kicked out of their stadium and practice facility because of strict new COVID-19 protocols in their home county.

The Niners will fly to Arizona on Wednesday where they will practice, live and play their next two games after Santa Clara County imposed a three-week ban on games and practices for contact sports.

The new rules that went into effect Monday and will last until at least Dec. 21 were announced Saturday as the Niners were preparing to fly to Los Angeles for a game against the Rams. The team scrambled to make new arrangements and settled on Arizona.

“You always expect bumps in the road no matter what you’re doing,” coach Kyle Shanahan said Tuesday. “The biggest bump was just the shock of finding out how long it was a day before we played. That was the biggest thing. I think our guys are pretty good at once they hear the parameters of stuff and adjusting and just dealing with whatever, especially this year. We’re used to getting away for a week or so. But I can’t tell you how sick of each other we are after a week in a hotel. ... A week’s not the daunting thing. It’s the month of December that guys get a little overwhelmed with. That’s why I’m just trying to get guys not think of it that way, even though the dates say that.”

Shanahan said the team looked into the possibility of practicing in the Bay Area outside of Santa Clara County and flying to Arizona for the games. But they couldn’t find a suitable location close enough to make it worth it and opted to go on the road for three weeks instead.

The Niners will fly out Wednesday afternoon and begin a normal week of practice Thursday at the site where the Arizona Cardinals held training camp in Glendale. The team will stay in a hotel near the practice facility and stadium before playing “home” games against Buffalo on Dec. 7 and Washington on Dec. 13.

San Francisco then plans to practice there again the following week before playing at Dallas on Dec. 20. With the next game scheduled on the road at Arizona on Dec. 26, Shanahan said he wasn’t sure whether the team would return to the Bay Area if the rules were relaxed by then or just stay in Arizona for an additional week.

But he did make one thing clear: “I just try to tell our guys that I don’t care what happens, we’re not going to spend Christmas without our families. We’ll figure it out. That’s really what I try to give to everyone just so they can say that to their families, because I think that is a concern.”

Shanahan said players could fly families down during this stretch to stay near the team although he suggested waiting a week to get situated first. He’s hopeful his family can come and possibly even see a game in person because Arizona allows families at games while the 49ers had no spectators at Levi’s Stadium.

The Niners have experience spending one week on the road, having done it between games back East the past two seasons. They won the second game on both of those trips.

This version won’t have any of the usual bonding time for players as COVID-19 protocols limit how much time players can have contact with each other. Shanahan said a 30-minute meal after a win at New Orleans last month led to positive tests.

But with the Niners (5-6) only one game out of a playoff spot, the team has plenty of reason to rally together and make a late-season push.

“When there’s more rewards and you’re seeing that you are in the fight, human nature is a lot more excited,” Shanahan said. “It’s easier to go through the grind when you have a chance to get into the tournament at the end.”

The Niners will be getting some reinforcements back with receiver Brandon Aiyuk and defensive linemen D.J. Jones expected to be activated this week from the COVID-19 list and return to practice.

Shanahan said quarterback Jimmy Garoppolo (ankle) and All-Pro tight end George Kittle (foot) could get back on the field for individual workouts soon but aren’t ready for practice. He held out hope the two could return for the final two games of the season.