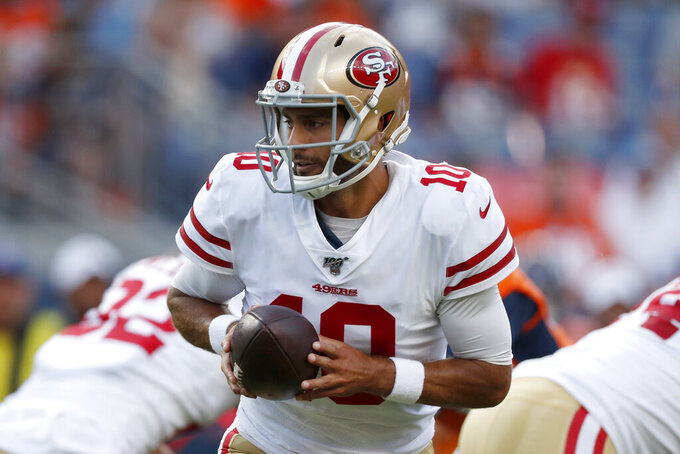 FILE - In this Aug. 19, 2019, file photo, San Francisco 49ers quarterback Jimmy Garoppolo (10) looks to hand the ball off during the first half of the team's NFL preseason football game against the Denver Broncos in Denver. Garoppolo remains a mostly untested commodity with 10 career starts in five seasons and has struggled in training camp and exhibitions. He must show that the Niners made the right choice when they invested in him. (AP Photo/David Zalubowski, File)

Strengths: Few teams invested more in defensive line than 49ers with Bosa, Solomon Thomas, DeForest Buckner, Arik Armstead all taken in first round in past five drafts. Ford also former first-round pick in Kansas City, providing San Francisco with many options at both edge and interior as long as Ford and Bosa stay healthy following minor injuries in training camp. Buckner one of best inside rushers with career-high 12 sacks in 2018.

Weaknesses: Niners set record for futility with two INTs last season and did little to add to secondary alongside Richard Sherman. Ahkello Witherspoon struggled in second season in NFL opposite Sherman, where he was targeted frequently. Also big questions at safety where Jimmie Ward is perpetually hurt and Jaquiski Tartt yet to emerge as impact player. Second-year player Tarvarius Moore moved back to free safety in offseason and showed speed to cover large areas of field and could work way into lineup.

Fantasy Players To Watch: TE George Kittle. Kittle set NFL record for tight ends last season with 1,377 yards receiving. Coach Kyle Shanahan has ability to scheme Kittle open and few are better running after catch. While Kittle had most of his success last year after QB Jimmy Garoppolo got hurt, healthy season from starting QB should only help his production.

Expectations: After 10 wins combined in first two seasons under Shanahan, pressure on 49ers to become contender. Healthy season from Garoppolo should provide boost to offense. Garoppolo made only 10 starts in career and needs to show he can get through entire season healthy. RB Jerick McKinnon out for second straight season after setback in attempted return from last year's torn ACL. Niners could use more dependable play at receiver, where second-year player Dante Pettis and rookies Samuel and Hurd could be best options. Defense needs to improve on anemic performance of seven takeaways from 2018. Pass rush should be improved with Bosa and Ford, but questions remain how well team can stop run and whether secondary's good enough to shut down passing offenses.