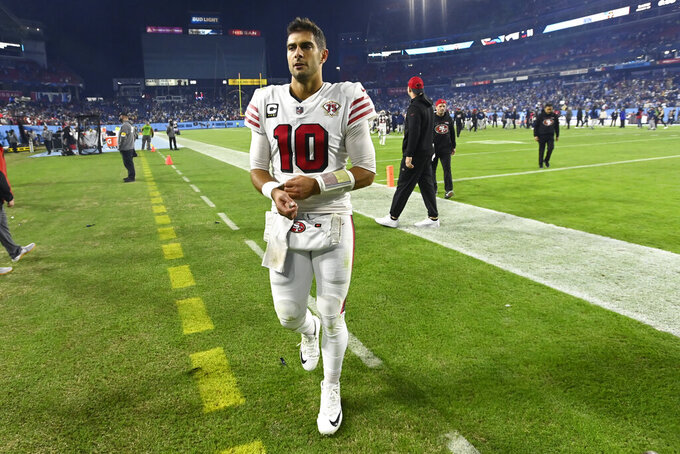 SANTA CLARA, Calif. (AP) — Jimmy Garoppolo has resumed throwing for the San Francisco 49ers and took part in practice in a limited role Wednesday but that doesn't mean his sprained right thumb is close to fully recovered.

Garoppolo tore a ligament in the thumb at Tennessee on Dec. 23 and was held out of practice last week. But he was able to throw on Tuesday and participate in practice on Wednesday as the Niners (9-7) prepare for a season-ending showdown against the Los Angeles Rams.

“It hurts," Garoppolo said before practicing Wednesday. "I don’t know how else to describe it. It feels like the web in your hand is kind of tearing a little bit. That’s probably the best way I could describe it, but yeah it’s all good.”

The quarterback question hangs over the Niners headed into this crucial game. San Francisco will make the playoffs either with a win at Los Angeles or if New Orleans loses at Atlanta.

Coach Kyle Shanahan said rookie Trey Lance would get the bulk of the work at Wednesday's light practice and he will see how Garoppolo responds as the week goes on.

“I think we have to be careful,” Shanahan said. "I think waiting until where we did definitely helped getting him to this point, but I think each day is a new experience with it. So it’s going to be mainly at Jimmy’s pace and just talking to him and making sure he doesn’t push it too hard to give him a chance for Sunday.”

Garoppolo said the injury is truly day to day as he felt good Tuesday but the thumb was bothering him more Wednesday.

Garoppolo played more than half the game in Week 16 after getting hurt, adjusting his motion to compensate for the injury.

He's hoping to get back to his usual form as quickly as he can and knows he has to weigh his desire to play with what is best for the team.

Shanahan said he doesn't know yet whether Garoppolo will be healthy enough to play this week but added that he might not make any announcement at all about who will start to force the Rams to prepare for both Garoppolo and Lance.

Lance fared well in his second career start last week, throwing two TD passes in the second half of San Francisco's 23-7 win at home over Houston. But he would get a much tougher test this week if he has to start against the playoff-bound Rams, who can clinch the NFC West with a win.

“Trey, I thought, did really well,” Garoppolo said. "He was calm out there, did well on the sideline, tried to help him out as much as I could, but he did well.”