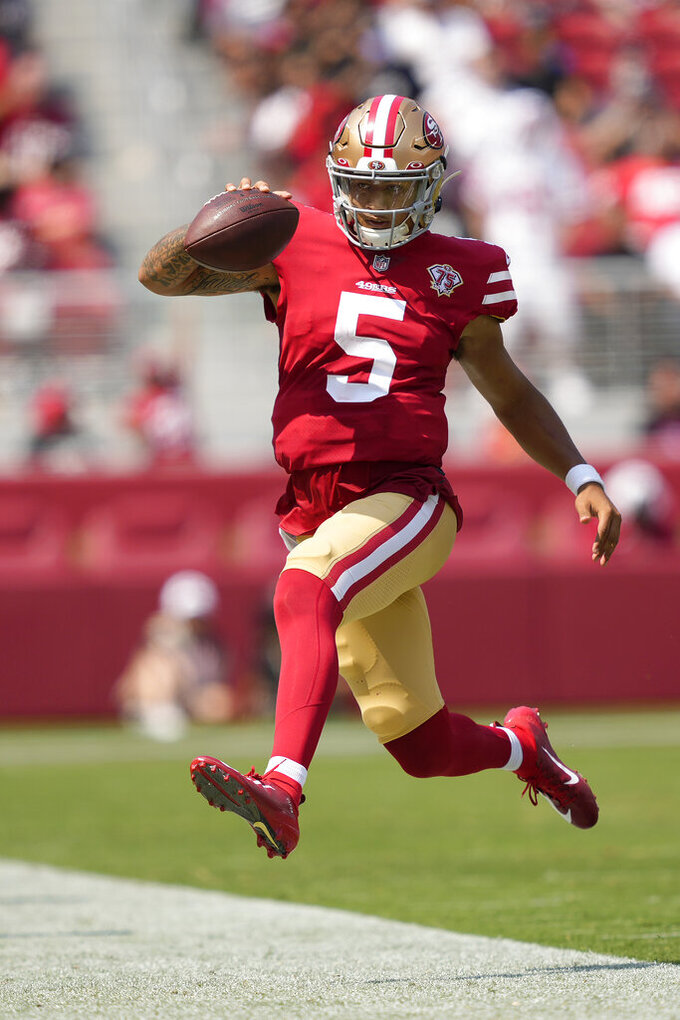 SANTA CLARA, Calif. (AP) — San Francisco 49ers rookie quarterback Trey Lance will miss one week of practice after injuring a finger on his throwing hand during an exhibition game.

Lance was hit on his right hand by the helmet of Las Vegas Raiders linebacker Max Richardson on Sunday. Lance remained in the game after the hit but got more tests done Monday that coach Kyle Shanahan said showed a “small chip fracture” in the finger.

Shanahan said Lance is unable to take snaps and needs to rest for about seven days before he can return. Lance will miss two practices this week but should be back next Monday when the 49ers begin preparations for their season opener Sept. 12 at Detroit.

Lance is expected to back up Jimmy Garoppolo to begin the season but also will be used with his own package of plays in certain situations.

The Niners will be without linebackers coach Johnny Holland for a longer period of time. Holland announced he will take a leave of absence from the team to undergo cancer treatment.

Holland said he has undergone several rounds of remission and relapse since being originally diagnosed with multiple myeloma in September 2019. He said the cancer has returned and he will leave the team Sept. 6.

“I will take some time away from the team to receive treatment,” Holland said in a statement. “In sharing the details of my diagnosis, my desire is that I can be an advocate and beacon of hope for those who are battling cancer to help remind them that we’re all in this together.”

Holland thanked 49ers ownership, Shanahan, general manager John Lynch and his doctors and said he hopes to return to the team “as soon as possible.”

Shanahan's relationship with Holland dates to their time together on a staff in Houston in 2006. He said he has “as much love for Johnny as any person I’ve ever been around.”

“We’ve gone through this with him for a bit. It came up first in ’19. It really inspired us a ton that year. It was defeated a number of times and he has the same battle again," Shanahan said.

“He always tells me, and he means it, how happy he is that he’s going through this and not someone else, not some kid or someone who couldn’t handle it the same way. ... I can’t say enough about Johnny. He’s a very special dude who I plan on being around here for much longer.”

NOTES: OL Shon Coleman has a triceps stain and will miss some time. ... WR Travis Benjamin remains in concussion protocol after getting injured Sunday.