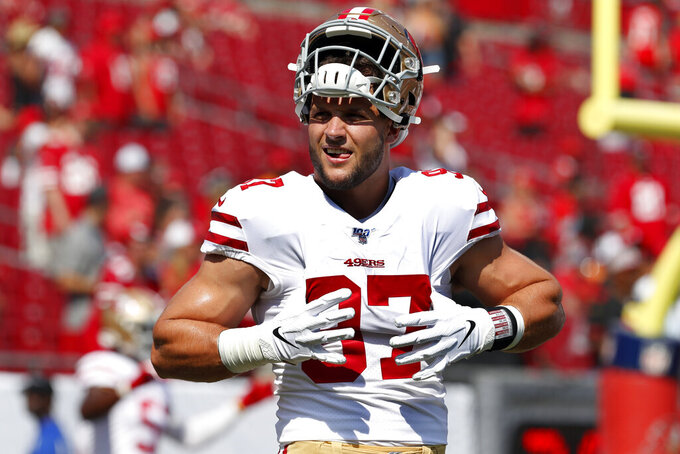 FILE - In this Sunday, Sept. 8, 2019, file photo, San Francisco 49ers defensive end Nick Bosa (97) warms up before an NFL football game against the Tampa Bay Buccaneers in Tampa, Fla. The rookie defensive end is not practicing as the 49ers began three days of workouts at Youngstown State. The No. 2 overall pick from Ohio State missed the entire preseason with a high ankle sprain, but played 39 total snaps and had a sack Sunday in San Francisco’s 31-17 win at Tampa Bay. (AP Photo/Mark LoMoglio, File)

YOUNGSTOWN, Ohio (AP) — San Francisco rookie Nick Bosa continues to be hindered by a high right ankle sprain that forced him to miss the entire preseason.

The No. 2 overall pick from Ohio State did not practice Wednesday as the 49ers began their three-day stay on the campus of Youngstown State.

Bosa played 38 snaps at defensive end and one on special teams Sunday in the 49ers' 31-17 victory at Tampa Bay, but walked off the field gingerly after the game because of lingering pain that has yet to subside.

"Nick didn't practice because of the ankle," coach Kyle Shanahan said. "It's still hurting from the game. He was sore after the game and still was today. He would have practiced if he wasn't still hurt from the game. Hopefully, he can recover by Sunday."

San Francisco is spending the week in the Mahoning Valley — instead of flying cross country from Florida — before its Sunday game at Cincinnati. Each of the practices is closed to the public.

Bosa had three tackles, one sack and three quarterback hits in the season opener, but his status for Week 2 is uncertain. Shanahan admitted concern about how his ankle will respond to the grind of a 16-game schedule.

The 6-foot-4, 266-pounder only played in three games for the Buckeyes in 2018 before undergoing season-ending bilateral core muscle surgery.

Quarterback Jimmy Garoppolo, who had reconstructive left knee surgery last Oct. 3, reported no aftereffects from his first start since Sept. 23, 2018. He displayed a bounce in his step and threw the ball crisply during the portion of practice that was open to the media.

Garoppolo went 18 of 27 for 166 yards, one touchdown and one interception against the Buccaneers.

"I feel good, no problems with the knee," the 27-year-old said. "I had some soft tissue (physical therapy) done, getting it flushed and everything like that, but it wasn't too bad.

"Honestly, the flight here probably did more damage than the actual game, just sitting in the same position for a long time. But yeah, it wasn't anything bad."

The upbeat Garoppolo added that he enjoyed the unusually warm, 90-degree conditions at Youngstown State's soccer and outdoor track facility, saying the humidity in the air wasn't as "thick" as it was in Tampa Bay.

San Francisco initially planned on practicing at the 20,630-seat Stambaugh Stadium, where the Penguins compete at the FCS level, but conflicting events caused them to shift all three sessions across the street.

A heavy security presence surrounded the complex, restricting traffic and preventing passers-by from taking pictures of the 49ers. Shanahan believes opposing teams have spied on his squads in the past.

"I've been around long enough to realize you should have some paranoia," he said. "You can never be too safe. If you aren't cheating, you're not trying, so you've got to be careful with that, especially in their home state."

NOTES: CB Ahkello Witherspoon scored his first NFL touchdown on a 25-yard interception return against the Buccaneers. The third-year pro limited Pro Bowl WR Mike Evans to two catches for 28 yards before trading jerseys with him. "I came in with the mentality to dominate him and take his jersey," Witherspoon said, breaking into a laugh. "He asked me, 'Did you know our offense?' I was like, 'No, not at all, but would you sign your jersey for me?'" ... S Jimmie Ward, who didn't play in Week 1, returned to practice on a non-contact basis with a cast on his right hand. His right ring finger became entangled in a teammate's jersey on Sept. 4, requiring an operation the next day. "I know Jimmie can deal with as much pain as anyone, so if it's too much, that means it's way too much," Shanahan said. "We'll see how that goes throughout the week, but he's not testing it right now."