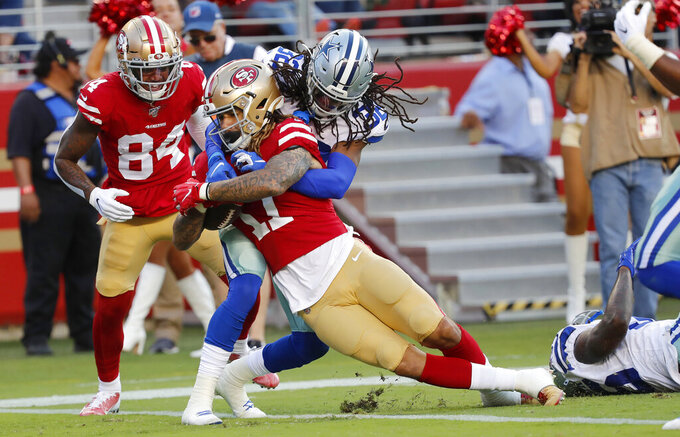 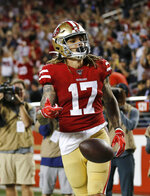 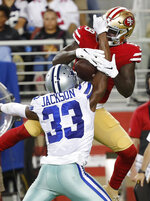 SANTA CLARA, Calif. (AP) — Deebo Samuel and Jalen Hurd showed flashes in the exhibition opener of the ability that led the San Francisco 49ers to take the two receivers on the second day of this year's NFL draft.

Samuel provided some big plays down the field and Hurd caught two touchdown passes as both rookies make their case for getting significant playing time when the regular season starts.

The Niners have only one receiver on the roster with more than 130 career catches in veteran Jordan Matthews, who isn't assured a spot on the roster when the season starts. So the opportunity is there to seize the chance but it will take more than a few highlights in the preseason to win over coach Kyle Shanahan.

"I want someone to take the job and make it to where it's extremely obvious," Shanahan said. "We haven't had that yet. We have a bunch of young guys who are extremely hungry, and they are going for it. We've got some other guys who have been here who have also been that way, but I think guys are very evenly matched right now and I want someone to step it up.

"The rookies, they made some good plays, but they also weren't very consistent either. There's lots of parts about their game that they have to clean up, and I thought it was very similar in the veterans, too."

Hurd provided the biggest highlights, bowling over a defender at the goal line on a 20-yard touchdown catch in the first half and then leaping over one for a 4-yard TD in the second half. Hurd also hesitated on a pass in the second half, contributing to an interception by C.J. Beathard, inconsistency that could be expected from a player who began his college career as a running back before switching to receiver and becoming a third-round draft pick.

Hurd's performance playing out of the slot was especially important because the projected top player at that position, Trent Taylor, had surgery to repair a broken bone in his foot Friday and could miss the start of the season.

Hurd, who is listed at 6-foot-4, 227 pounds, offers impressive size in the slot where smaller players usually thrive.

"We bring the physicality in the group," Samuel said. "You can see with his big frame and with his body it is going to take more than one person to bring him down."

Samuel also showed flashes of why he was a second-round pick, making an impressive 45-yard catch down field, drawing a 25-yard pass interference call and showing his ability in space on a 14-yard run.

He picked up where he left off in practice leading up to the first exhibition game against Dallas.

"It's just not too big for Deebo," Shanahan said. "He's very competitive. He's a good wide receiver, but he's one of the more physical guys out there."

Making the performance from Samuel and Hurd more important is what's happening elsewhere at the position. Taylor is hurt after an impressive start to training camp.

Last year's second-round pick Dante Pettis has yet to build on a productive end to his rookie season and was one of the few projected starters to play in the exhibition opener in a message sent by Shanahan.

"I wanted him to compete," Shanahan said. "We're trying to see who our starting receivers are and I wanted to get him a chance to get out there. ... Dante has a lot of room to grow. He can still get a lot better. So can a lot of the other guys."

The other players in the mix are Matthews, who has just 45 catches the past two seasons while dealing with injuries, along with Kendrick Bourne and Richie James Jr., who have yet to show they can be dependable wideouts in the NFL.

That's why the performance by the rookies was encouraging even if it wasn't perfect.

"We know what they bring to the table and it's cool to see that, but at the same time, it's a first step," backup quarterback Nick Mullens said. "It's only the first preseason game and so we're excited to see how they can go going forward."

NOTES: The Niners signed T Sam Young to a one-year deal to replace the injured Shon Coleman. ... Coleman was officially placed on IR with a broken right leg and dislocated ankle.