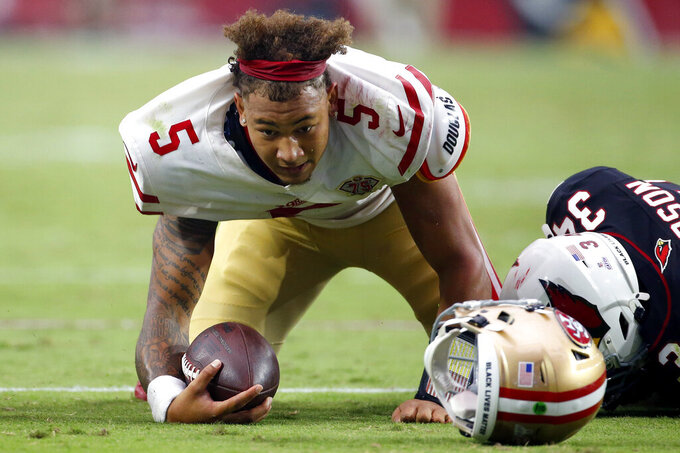 SANTA CLARA, Calif. (AP) — Rookie Trey Lance's first career start for the San Francisco 49ers featured a bad interception, a couple of promising moments and a knee injury that could sideline him for a week or two.

Coach Kyle Shanahan said Monday that Lance sprained his left knee during the 17-10 loss to the Arizona Cardinals and his status for when San Francisco returns from the bye next week remains up in the air.

Shanahan said Lance doesn't remember when he hurt the knee, but felt it in bed Sunday night and underwent an MRI on Monday. The tests showed the sprain, but the injury is not considered serious.

Lance will remain in town during this week's bye to rehab and will evaluated later in the week. The Niners should know early next week whether he has a chance to play after the bye against Indianapolis.

“It should be a one-to-two-week thing, but possibly just one,” Shanahan said.

Starter Jimmy Garoppolo also will be rehabbing his injured calf that sidelined him against the Cardinals and is expected to be able to play against the Colts.

Shanahan has maintained that Garoppolo is the starter when healthy, but was encouraged by what he saw from Lance in his first start since being drafted third overall.

Lance threw high on his second pass of the game for an interception, but protected the ball well after that even though he was only able to drive the Niners to one TD.

Defense. After getting picked apart two weeks ago in a loss to Green Bay, San Francisco's defense has taken some good strides the past two weeks under first-year coordinator DeMeco Ryans. They held Kyler Murray and the Cardinals in check, limiting an offense that came into the game leading the NFL in scoring and yardage to season lows with 17 points and 304 yards.

RB Elijah Mitchell. The sixth-round rookie has clearly established himself as the lead back with Raheem Mostert after returning from a shoulder injury that sidelined him the past two games. Mitchell played 44 snaps to fellow rookie Trey Sermon's two on offense. Mitchell had nine carries for 43 yards to go with two catches for 19 yards.

RT Mike McGlinchey. After a solid start to his fourth season, McGlinchey reverted to last year's form when he struggled at right tackle. He allowed a team-high four pressures in the loss, according to Pro Football Focus, and also committed three penalties as he had problems dealing with J.J. Watt.

LB Marcell Harris underwent surgery for a broken right thumb, but should be able to play after the bye. ... CB K'Waun Williams (calf) and RB Jamycal Hasty (ankle) are expected to return from injuries after the bye as well.

6. The Niners got their second takeaway when Dontae Johnson forced and recovered a fumble to give them the ball at the Arizona 48, trailing 10-7 midway through the fourth quarter. They were unable to turn it into points, leaving them with just six points off turnovers this season.

Week off before hosting Indianapolis on Oct. 24.