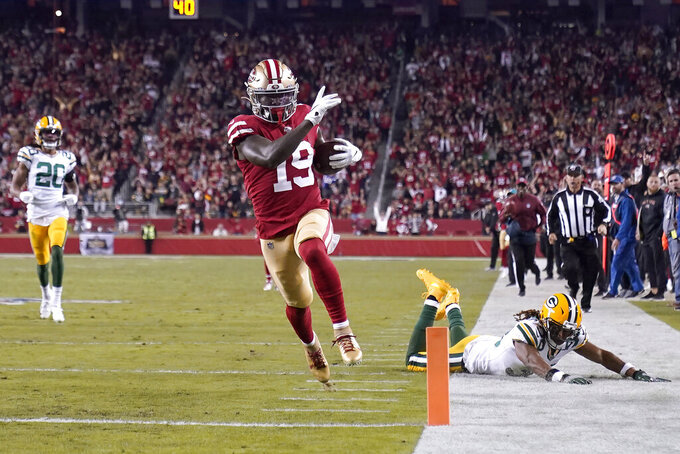 SANTA CLARA, Calif. (AP) — A strip sack on the opening drive that set up a touchdown got the San Francisco 49ers off to a rousing start to a grueling three-game stretch.

Garoppolo threw two long touchdown passes and the San Francisco harassed Rodgers into one of the worst performances of his brilliant career, leading the 49ers to a 37-8 victory over the Packers on Sunday in the first of three straight games against first-place teams.

“Apparently nobody has to play us. We just have to play everybody. We're just the punching bag people come punch on,” said cornerback Richard Sherman, clearly piqued by the talk of how difficult San Francisco’s upcoming opponents are.

Garoppolo connected on a 42-yard touchdown strike to Deebo Samuel in the second quarter and a 61-yarder to George Kittle in the third to start this stretch for San Francisco (10-1) off on a high note.

Following this game against the first-place Packers (8-3), the Niners will travel to Baltimore (8-2) and New Orleans (9-2) the next two weeks in a stretch that will go a long way to determining whether San Francisco will be able to hold off Seattle (9-2) in a tight NFC West race.

“We crave every single game,” defensive tackle DeForest Buckner said. “Every week is a new challenge. The good thing about this team is we don’t get scared of who our next opponent is or ‘Oh this team is supposed to be a top team.’ It’s just another team. We know how good we are. We just have to show it every chance we get.”

Rodgers lost a fumble on the opening drive one of the five sacks he took and failed to convert a single third down on 13 tries before getting pulled late in the fourth quarter. He finished 20 for 33 for 104 yards and Green Bay averaged an anemic 1.7 yards per pass play when he was in the game.

“There wasn’t a whole lot positive tonight,” Rodgers said. “A lot of the stuff we talked about during the week, eliminating negative yardage plays, obviously we didn't do that. They got after us up front, and the coverage was good on the back end.”

After allowing 78 points the past three weeks in two games against Arizona's Kyler Murray and one against Seattle's Russell Wilson, the Niners’ defense was back to its dominant form.

San Francisco allowed 198 yards on 70 plays, didn't allow a single completion longer than 15 yards and got a key stop against Aaron Jones on a fourth-and-1 run in the first half when the outcome was still in doubt.

Garoppolo then put it away with the two long touchdowns, part of a day when he went 14 for 20 for 253 yards and most importantly committed no turnovers.

He was helped by the return of Kittle, who had six catches for 129 yards in his first game back after missing the past two contests with injuries to his knee and ankle.

The 49ers broke it open late in the first half after forcing the Packers to punt following the two-minute warning. Garoppolo threw a 42-yard TD pass to Samuel to cap a three-play drive that made it 20-0. The Niners then forced a three-and-out and took over at their 48 with 24 seconds left. Garoppolo completed a 22-yard pass to Kittle that set up Chase McLaughlin's 48-yard field goal.

The Packers got into an early hole when Fred Warner sacked Rodgers on the opening drive, forcing a fumble that Nick Bosa recovered at the 2. It was the first opening-drive turnover for Green Bay since the 2017 season finale when Brett Hundley threw an interception against Detroit. The last time it happened with Rodgers at quarterback came in the 2017 opener when he threw an interception against Seattle.

Tevin Coleman ran it in on the next play, marking the second time this season San Francisco scored on its first play. Matt Breida scored on an 83-yard run last month against Cleveland. The Niners were the first team since the 2013 Raiders to score twice on the opening play in a single season, according to the Elias Sports Bureau.

Packers: RT Bryan Bulaga left in the first quarter with a knee injury.

49ers: G Mike Person left in the fourth quarter with a stinger. ... DT Jullian Taylor left late in the game with a jaw injury.

49ers: At Baltimore on Sunday.