49ers sticking with Nick Mullens at QB despite turnovers 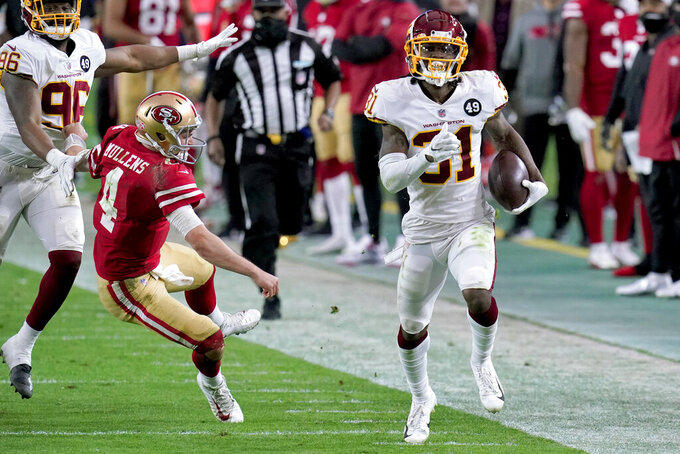 The San Francisco 49ers are sticking with Nick Mullens at quarterback for now despite a pair of costly turnovers that led to defensive touchdowns in last week’s loss to Washington.

Coach Kyle Shanahan had said he would evaluate the position following the 23-15 loss to Washington but ultimately decided to stick with Mullens over C.J. Beathard for this week’s game at Dallas. Starter Jimmy Garoppolo remains out with an ankle injury.

“Nick, first and foremost, if he wants to stay out there, he’s got to stop turning the ball over,” Shanahan said Wednesday. “But I think when you look back to Sunday, I think the other thing that sticks out the most is he missed a number of open throws, just throwing over guys’ heads, about four of them right now. ... Nick needs to make those throws and he’s capable of making those throws.

"But I also know it doesn’t help when you have nine drops on top of that. So, to make one guy the center of attention and everything, I know emotionally how everyone feels. I feel that way, too, at times, but that’s why you’ve got to study the tape and really think about it and do what’s best for the team.”

Mullens has been a bit hit or miss this season in seven starts in place of Garoppolo. He is averaging 272.7 yards passing per game but has struggled to protect the ball. He has committed 12 turnovers in those seven games, including a fumble and an interception last week that were both returned for touchdowns.

Mullens hasn’t gotten a lot of help with several key offensive skill players out injured during his time as starter, and the offensive line struggling in protection, leading to 17 sacks.

Mullens also missed several easy throws when the ball sailed on him. He said he needs to settle down in the pocket and have better footwork to eliminate those in the future.

“I was a little antsy from the start on Sunday,” he said. “So just staying calm in the pocket, I think that’s the biggest thing. If I stay calm in the pocket and go with my reads and then everything else takes care of itself. That’s one thing that I’m going to focus on this week.”

San Francisco got a lift at practice with the return of 2019 All-Pro tight end George Kittle, whose 21-day practice window from injured reserve was opened Wednesday. Kittle has been out since injuring his foot on Nov. 1 at Seattle after missing two games earlier this season with a knee injury.

The Niners were missing two other key offensive pieces with receiver Deebo Samuel out for at least the rest of the regular season with a hamstring injury, and leading rusher Raheem Mostert missing practice with an ankle injury. Shanahan is hoping to get Mostert back this week.