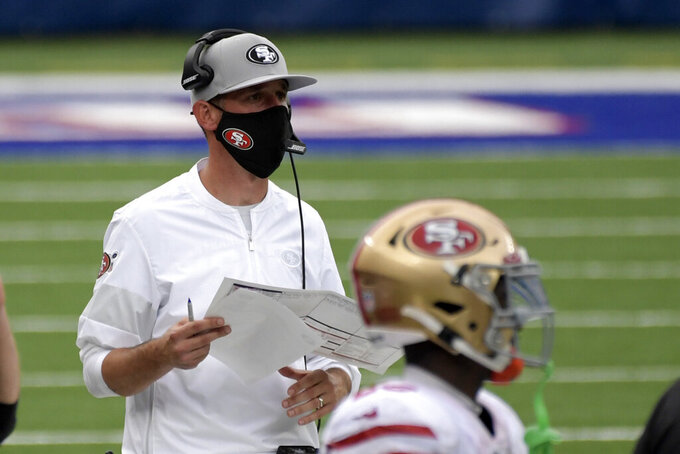 FILE - In this Sept. 27, 2020, file photo, San Francisco 49ers coach Kyle Shanahan watches during the second half of the team's NFL football game against the New York Giants in East Rutherford, N.J. The drama about which position the 49ers would target for their first pick of the NFL draft was erased as soon as they traded three first-round picks and a third-rounder to move up to No. 3. The question then turned to which quarterback prospect Shanahan and general manager John Lynch will hitch themselves to with that pick. (AP Photo/Bill Kostroun, File)

The San Francisco 49ers added some players to help new quarterback Trey Lance, drafting Notre Dame guard Aaron Banks in the second round and Ohio State running back Trey Sermon in the third round of the NFL draft.

The Niners took Banks with the 48th pick Friday night to bolster the offensive line a night after taking Lance with the third overall pick.

San Francisco moved down from No. 43 in a trade with the Raiders that gave the Niners an additional fourth-round pick and sent a seventh-rounder to Las Vegas.

The Niners then traded up to get Sermon, sending two fourth-round picks to the Rams for the 88th selection.

These picks combined with Lance, who excels in the quarterback running game, give the Niners the ability to rely on a power running game as well as the deception that is a big part of coach Kyle Shanahan's offense.

“Physicality is something we value a lot,” Shanahan said. “We love guys who play physical. But you got to have a certain skill set that we’re looking forward to. All these guys did have that skill set. When you can find guys who have a skill set that you appreciate and you think fits well and what you’re trying to do, and then they have that mindset, that’s what we always want.”

This is the first time since 2012 that the Niners opened the draft by taking three straight offensive players. They got little production out of that 2012 group made up of receiver A.J. Jenkins, running back LaMichael James and guard Joe Looney.

Banks gives San Francisco another Notre Dame lineman on the roster after taking right tackle Mike McGinchey in the first round in 2018. Banks will likely compete to start at right guard in the only spot in question on San Francisco's line.

“I think I bring a physicality to the game,” Banks said. "I like to deliver a lot of loads, I like to knock people down. Some people call it ‘head hunting.’ But, I’m a big body to the offensive line that plays big, plays with a lot of physicality, likes to hit people, likes to knock people down and sometimes you see it. This isn’t a game that a lot of people want to play. So, I think that I bring that kind of edge to the offensive line.”

The 6-foot-5, 325-pound Banks has experience in college in a zone-blocking system that San Francisco uses. He started 31 games in three seasons in college and allowed no sacks last year, according to SportsInfo Solutions.

Banks grew up in the Bay Area in Alameda and went to high school in El Cerrito.

Sermon rushed for 870 yards and four TDs in eight games for Ohio State this season after transferring from Oklahoma. He ran for 2,946 yards and 26 TDs in his college career, averaging 6.5 yards per carry.

Sermon lacks the breakaway speed that the Niners usually covet in their backs after running the 40-yard dash in 4.57 seconds, but general manager John Lynch said Sermon timed well in the 10-yard split and is suited to the team's outside zone running game.

“You see that first, you see that ability to stick his foot in the ground, break tackles and hit it in a hurry,” Lynch said. “Then he’s very adept at making the free safety, the second level defender miss. ... I think he’s a good fit for what we do.”

Thomas is a physical cornerback who can play both on the outside and inside. Thomas allowed a passer rating of just 46.4 during his career at Michigan before opting out in 2020.

The 49ers have four picks on Saturday with three in the fifth round and one in the sixth.