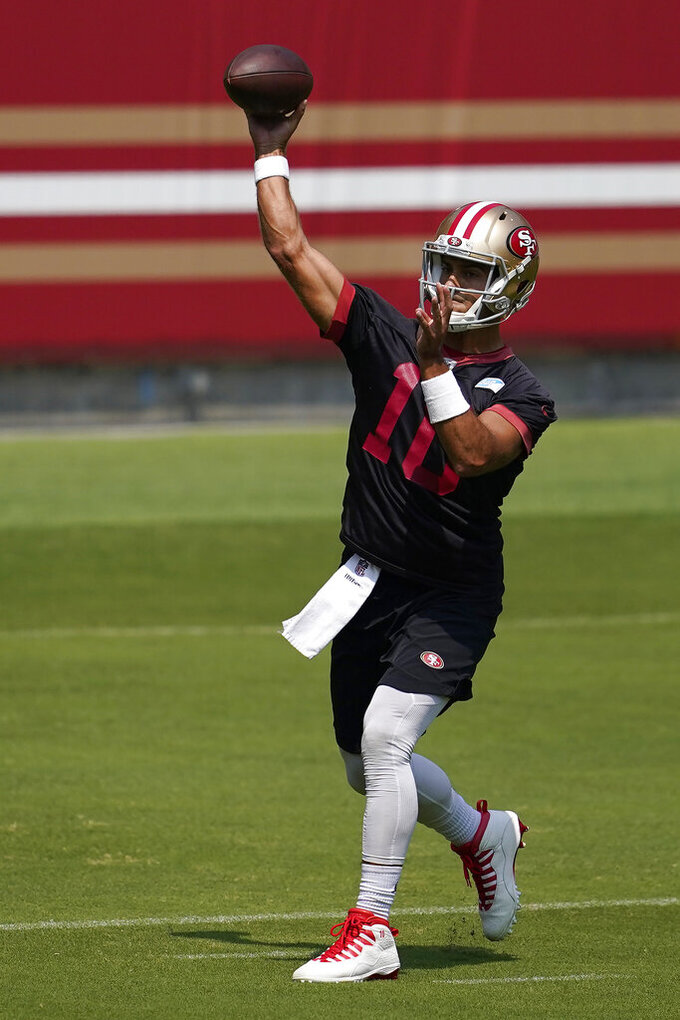 SANTA CLARA, Calif. (AP) — When Jimmy Garoppolo was last seen on the football field he was missing Emmanuel Sanders on a deep pass for a potential go-ahead score in what turned out to be a painful fourth-quarter Super Bowl collapse.

Those final few minutes put a damper on what had been a mostly successful first full season as a starting quarterback for Garoppolo. It also raised questions in some quarters about whether Garoppolo was the long-term answer for the San Francisco 49ers.

The poor finish to the Super Bowl after throwing only eight passes in the NFC title game was followed by the Niners considering making a run at Tom Brady in free agency.

But coach Kyle Shanahan and general manager John Lynch decided Garoppolo was the best option in a move his teammates have vocally backed all offseason whenever anyone dared criticize their quarterback.

“How dare you doubt my dude like that. You’re crazy,” guard Laken Tomlinson said. “Come on man. You see him out there doing his thing. Come on man. You can’t do that. That’s my dog. ... Jimmy is a leader to all of us out there. It’s all nonsense. It’s all just talk.”

Garoppolo did plenty to earn that respect as one of only two quarterbacks to rank in the top five in the league last year in TD passes and yards per attempt.

He threw for 3,978 yards and 27 touchdowns last season, helping the Niners win 13 games thanks to four fourth-quarter comebacks and rank second in the NFL with an average of 29.9 points per game.

He didn’t need to do much in the first two playoff wins when the 49ers dominated on the ground but played well for most of the Super Bowl. He completed 18 of his first 21 passes in three-plus quarters to stake the Niners to a 20-10 lead over Kansas City.

But he went just 2 for 10 down the stretch with the biggest miss coming on an overthrown deep shot to Sanders with San Francisco trailing 24-20.

Garoppolo was sacked on the next play to turn the ball over on downs and Kansas City put the game away with a 38-yard TD run by Damien Williams.

But that late game hiccup didn’t lessen the support Garoppolo has in the locker room, which he appreciates.

“Whenever your teammates can back you up like that, say something nice in your favor, it’s always nice to hear,” Garoppolo said. “What goes on in that locker room, what we see on a daily basis from each other, just the time that we put in, the work that we put in, I think that goes a lot further than everything else. I love my teammates, love the brothers, but it’s a great group of guys to be with.”

Garoppolo’s first opponent this season doesn’t need any convincing about how capable a quarterback he is. Garoppolo had two of his best games last season against Arizona.

Garoppolo competed 76% of his passes in those two wins for 741 yards, eight TDs, two interceptions and a 125.1 rating. He threw a 16-yard pass on third-and-11 to Sanders to help seal the first win and then a go-ahead 25-yard TD pass in the final minute to Jeff Wilson Jr. a few weeks later for another win.

“Both times we played Jimmy, he was awesome,” Cardinals coach Kliff Kingsbury said. “He played as good as anybody played against us all year. In both games. I’m a big fan of his. He’s a special talent.”

Now Garoppolo gets a second full season as starter under Shanahan with hopes that he can match the success Matt Ryan and Matt Schaub had when they played year two with Shanahan as their play-caller.

Ryan won the MVP and led the Falcons to the Super Bowl in his second full season in Shanahan’s system, while Schaub led the NFL in yards passing for Houston.

Now Garoppolo gets his chance after playing five games at the end of 2017 with the Niners and three to begin the next season before a knee injury sidelined him.

“If you’re good enough, then the more you do something, usually the better you get at it,” Shanahan said about the year two success. “With Jimmy going through what he went through last year and being able to pull off the year that he did, especially with coming off an injury, he learned a lot and also played at a very high level. To be able to go through that this year, having very similar players around him, the offense doesn’t change. You just get better at it. I think that’ll definitely help him.”