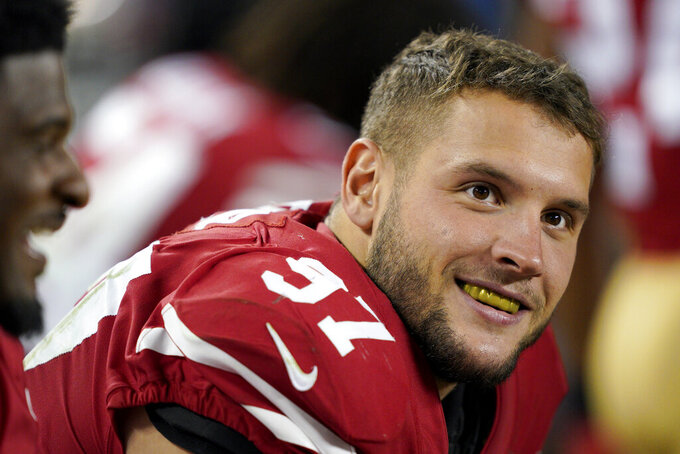 San Francisco 49ers defensive end Nick Bosa (97) smiles on the sideline during the second half of an NFL football game against the Cleveland Browns in Santa Clara, Calif., Monday, Oct. 7, 2019. (AP Photo/Tony Avelar)

SANTA CLARA, Calif. (AP) — The San Francisco 49ers had high expectations when they drafted Nick Bosa with the second pick in the draft.

Through just four games, he may have already exceeded those expectations.

They just don't want the rookie defensive end to know it yet.

On Thursday, defensive coordinator Robert Saleh downplayed Bosa's success. "He's about where we thought," Saleh said. "He is doing a really, really nice job. But, as much as people are praising him today, he can go out and lay an egg."

Through the first quarter of the season, the rookie defensive end out of Ohio State has recorded three sacks, nine quarterback hits, eight tackles and four tackles for loss.

Bosa had some ups and downs earlier in the season while he recovered from a high-ankle sprain he suffered during training camp. But he got to heal and rest during the 49ers' bye week. On Monday night against the Browns, he was healthier and produced his best performance yet: two sacks, four tackles, five quarterback hits.

"He had a little bit of a late start with the injury," Shanahan said. "He's played good in every game, though, even though he's been limited. Last week versus Cleveland was the first time that he really got to go and play a full game. It was a better result, so hopefully that continues."

Shanahan said Bosa looked more explosive against the Browns than he did before the break. "You could see that in practice," Shanahan said. "When you have an ankle (injury), each week some little thing happens to it here and there. I think he went the whole week last week not (reinjuring) it. You see each day it get a little better and better."

Bosa expects opposing teams to pay more attention to him now by double-teaming him, or chip-blocking him with a running back or a tight end or sliding the offensive line's protection in his direction.

"But that can't really last too long," Bosa said, "because we have three other guys who can win one on one and get to the quarterback. If they want to chip me and slide to me and free up Arik Armstead one on one on a guard, I'll take that every day."

Bosa certainly isn't the only 49ers defensive lineman who has played well this season. The top four linemen all are former first-round picks: DeForest Buckner, Dee Ford, Armstead and Bosa. Buckner has three sacks and two forced fumbles, and Ford and Armstead have two sacks each. Those four players have helped the 49ers produce the second-ranked defense in the NFL.

"This week, Bosa obviously got the defensive player of the week," Sherman said. "But, Buckner, no one is really talking about him, and he is making an impact every game. He's pushing the pocket around. Armstead is playing unbelievable. This is probably the best football he has played in his career. Every single one of them deserves credit, and I just hope they get the credit they deserve."

By Tom Canavan just now
By Tom Withers just now
By Schuyler Dixon 48 minutes ago
By The Associated Press an hour ago
By Dennis Waszak Jr. 2 hrs ago