49ers try to move past Super Bowl loss in opener vs. Cards 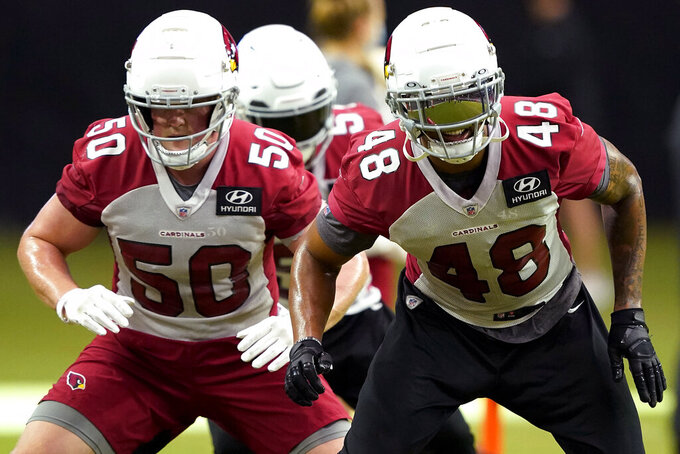 SANTA CLARA, Calif. (AP) — The pain from a fourth-quarter Super Bowl collapse remains acute as the San Francisco 49ers are set to start their quest for a title once again.

As much as the Niners may want to avenge that loss in their first game in more than seventh months, they know they first must endure the long process of the regular season starting with the opener at home Sunday against Arizona.

“We can’t necessarily get ahead, because as soon as you start getting ahead, that’s when you lose focus and lose sight of what the actual goal is, to win the championship,” running back Raheem Mostert said. “So for us, we have unfinished business. That’s our motto. That’s what we believe in. But at the same time we’re looking Week 1 against the Cardinals. That’s our main objective right now.”

In order to get back to where they were on Feb. 2 when their 20-10 lead over Kansas City with less than seven minutes to play ended in a 31-20 loss to Patrick Mahomes and the Chiefs they must first survive an improved NFC West.

Perhaps the most active team in the offseason was the Cardinals, who are looking to build on last season’s improvement in the first season under coach Kliff Kingsbury and quarterback Kyler Murray.

Arizona improved its scoring by 8.5 points per game and went 5-10-1, hanging tough in two losses to San Francisco. Now they’ve added a dynamic No. 1 receiver in DeAndre Hopkins and a versatile defensive playmaker in rookie Isaiah Simmons to close the gap.

“They were 10 minutes away from winning the Super Bowl and really looked very dominant during the playoffs for much of the time, except that last 10 minutes against the Chiefs when did his thing and the Chiefs were rolling," Kingsbury said.

Murray is back after an encouraging rookie season. The 2019 No. 1 overall pick gained some weight during the offseason by hitting the weight room, adding some muscle that he hopes can help him absorb the pounding of a 16-game NFL season. The 5-foot-10, 207-pounder proved during his rookie season that his short stature wasn’t a problem. Murray had some of his best games of 2019 against San Francisco: He completed more than 70 percent of his passes over the two games and threw four touchdowns with no interceptions.

Few players have been awaiting the opener as long as 49ers left tackle Trent Williams. After sitting out last season because of injuries and a dispute with the front office in Washington, the seven-time Pro Bowler is excited to get back on the field as Joe Staley’s replacement in San Francisco.

Hopkins makes his much-anticipated debut with the Cardinals after the blockbuster trade with the Texans that brought him to the desert. The 6-foot-1, 212-pound veteran is a three-time All-Pro who has been one of the NFL’s most durable and productive receivers over his seven seasons.

He’s also added a little cash to his bank account: The Cardinals announced on Tuesday that Hopkins agreed to a two-year contract extension worth a reported $54.5 million. The deal keeps him in Arizona through 2024.

“I think it’ll be a huge adjustment for everyone out there,” he said. “You don’t realize just what constant noise is like. It’s not about being loud or too low. It’s about just constant. I mean, usually when the play starts, you get to hear the pop and you get to hear football. When things aren’t going on, you can have conversations with people and stuff. So just the constant noise, it’s a little tough to deal with, but fans won’t be having to deal with it. That’ll just be us."

Arizona’s defense will look much different than it did in 2019. The Cardinals hope it performs better, too, after giving up the most total yards in the NFL last season. The Cardinals added versatile linebacker Isaiah Simmons with the No. 8 overall pick. They were also active in the free agent market, signing linebackers De’Vondre Campbell and Devon Kennard, along with defensive lineman Jordan Phillips.