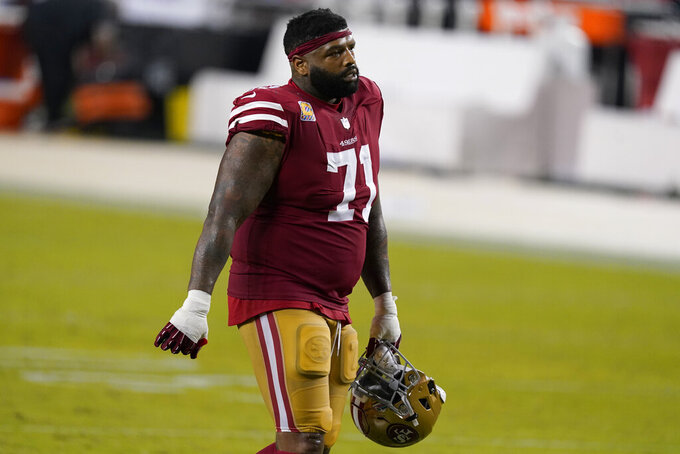 FILE - San Francisco 49ers offensive tackle Trent Williams (71) walks off the field after the 49ers were defeated by the Philadelphia Eagles in an NFL football game in Santa Clara, Calif., in this Sunday, Oct. 4, 2020, file photo. All the bitterness and anger that characterized Trent Williams’ final year in Washington when he sat out the 2019 season, feuded with management and ultimately forced a trade to San Francisco are in the past. Williams is headed into his first game against his former team on Sunday when the 49ers take on Washington, saying he holds no ill will to his former franchise. (AP Photo/Tony Avelar, File)

All the bitterness and anger that characterized Trent Williams’ final year in Washington when he sat out the 2019 season, feuded with management and ultimately forced a trade to San Francisco are in the past.

Williams is headed into his first game against his former team on Sunday when the 49ers take on Washington, saying he holds no ill will to his former franchise.

“The people who helped instigate this situation are no longer part of the organization,” Williams said Thursday. “I’m not going to sit here and just carry some grudge just because people expect me to carry it.”

Williams was at odds with the organization when he refused to play last season because he said he distrusted the medical staff and front office because of a botched cancer diagnosis.

He ended his holdout and hoped to be traded before the deadline but a deal never happened. Williams was banished from the facility by former team president Bruce Allen.

Williams thought there was a chance to stay when coach Ron Rivera was hired and there was an overhaul to the organization. But ultimately Williams wanted out and was traded to San Francisco during the draft for a 2020 fifth-round pick and a 2021 third-rounder.

“I think there was a glimpse of hope that I would remain there,” Williams said. “But after talking to Ron, I think we were on two different pages. He was coming into a team that he probably didn’t know all that well. He wanted everybody to kind of show him what they had. At the point I was in my career, I just didn’t feel like I had to show him what I had just to stick around. I knew there would be suitors out there. I just respectfully wanted to go my own way. No disrespect.”

The Niners were quite happy with how it all worked out. Coach Kyle Shanahan was on the staff in Washington when Williams was drafted in the first round in 2010 and knew he’d be the perfect replacement at left tackle for the retired Joe Staley.

Williams has quickly got back to the form that made him a seven-time Pro Bowl selection during his time in Washington as the anchor to San Francisco’s offensive line.

“He came in so hungry and excited to play football,” Shanahan said. “One thing about Trent, everybody knows his talent, but Trent enjoys playing football. He’s fitting in great here. The guys respect the hell out of him. We had a great two-week training camp where guys got to know him, and he got voted one of our team captains. I think that says a lot about the guy. I know the year hasn’t gone the way he or I had hoped, but he’s been exactly what I’d hoped for as a player and the exact person I thought and even more.”

While the injury-riddled Niners have struggled to get back to the form that helped them reach the Super Bowl last season, Williams has played at a high level most of the season.

San Francisco hopes to be able to keep him on a long-term deal before he hits free agency next offseason, but his reworked contract prevents the team from using the franchise tag on Williams.

Williams would like to stay and said his goal is to end up in San Francisco’s ring of fame when asked if he was worried his bitter departure from Washington might cost him that honor from his original team.

“I fit right in,” Williams said about his new home. “The coaching staff, the guys in the locker room, they’re all a pleasure to work with. It’s been a heck of a ride. Obviously, it hasn’t went the way we expected it to go. I definitely feel like I fit in here. This offense is kind of tailor made for guys like me. I think this team is built to compete and compete for years to come.”