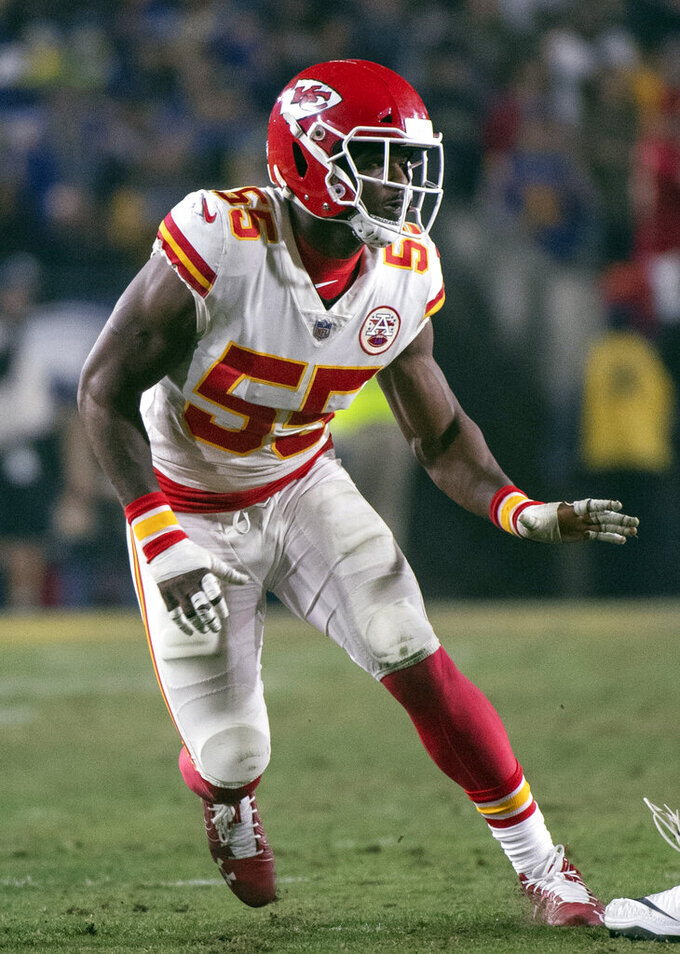 FILE - In this Nov. 19, 2018, file photo, Kansas City Chiefs outside linebacker Dee Ford during an NFL football game against the Los Angeles Rams in Los Angeles. The Chiefs placed a franchise tag on Ford before the NFL deadline on Tuesday, March 5, 2019. (AP Photo/Kyusung Gong, File) 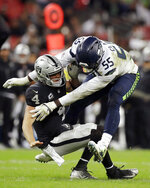 Ends DeMarcus Lawrence of Dallas and Frank Clark of Seattle, linebackers Dee Ford of Kansas City and Jadeveon Clowney of Houston, and DT Grady Jarrett of Atlanta received non-exclusive tags. So did Gould.

That means the players can negotiate with other teams, which would be required to give up two first-round draft choices as compensation for signing the tagged player — something that rarely occurs.

Lawrence, 26, was tagged for a second straight year. He is in line for $20.5 million, 120 percent more than he made under the tag last season. Even if the 26-year-old signs it, Lawrence and his representatives have until July 15 to work out a long-term deal with Dallas.

Last year, Lawrence signed a $17.1 million contract the same day the Cowboys placed the franchise tag on him. He had 10½ sacks as the main cog in Dallas' improved defense this past season.

Clark, 25, had a career-high 13 sacks in 2018 despite no longer having veterans Michael Bennett and Cliff Avril up front with him. Those were the most sacks by any Seattle player since 2007.

"It's been marvelous to watch him grow. He's grown within the program," coach Pete Carroll said of Clark late last season. "How many years has he been here? Four? Yeah, so it's like he's a senior now and he's acting like it. He's embraced the opportunity and the role.

"He's just grown up right before our eyes and he speaks so clearly about how it all works together."

Ford, who will be 27 this month, comes off the best season of his career with 13 sacks and forcing an NFL-leading seven fumbles. The Chiefs have expressed an interest in a long-term deal, though they are also open to trading him as they switch from a 3-4 to 4-3 base defense under new coordinator Steve Spagnuolo.

"The one thing he can do, and we all know this, he is an explosive football player that makes a lot of plays," said Spagnuolo, who was hired after the Chiefs lost to the Patriots in the AFC title game to turn around one of the league's worst defenses. "He's had some production and if he is here with us, I'll be excited to have him and be excited to work with him."

Clowney, 26, has said repeatedly he'd like to remain a Texan and after Houston lost 21-7 to the Colts in the wild-card round in January he reiterated that sentiment.

"We were a lot better than what we played (against Indianapolis)," he said then. "Of course I want to come back and show everybody that with this team. But that's up to them."

Jarrett was a bright spot in the Falcons' disappointing 2018 season. Jarrett, 25, had 52 tackles and set career highs with six sacks and three forced fumbles as the leader of Atlanta's defensive front.

"As we have said since the end of the season, getting a deal done with Grady is our priority," Falcons GM Thomas Dimitroff said. "Applying the franchise tag to him does not change that in any way. Our aim is for Grady to be an integral part of our plan for many years to come and this allows us to extend our negotiating window."

Gould, 36, has been the NFL's most accurate kicker during his two seasons with San Francisco. Gould has made 72 of 75 field goal attempts and 55 of 59 extra points. He leads the NFL in made field goals and field goal percentage over that span.