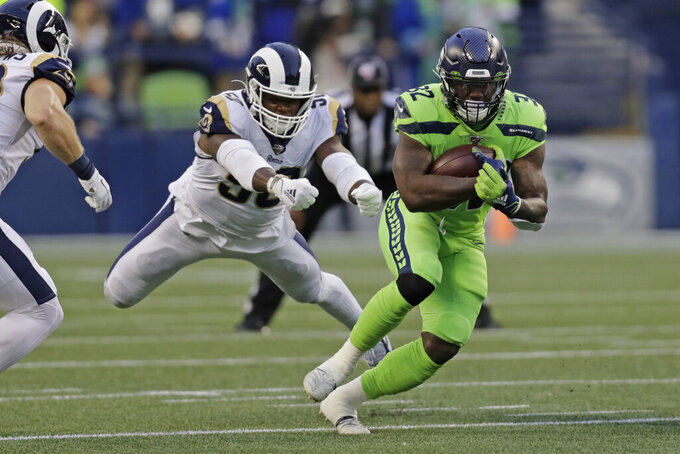 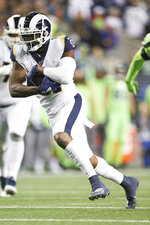 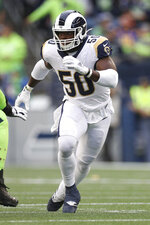 The Rams are expecting more big performances from two backups who are back in the spotlight.

Everett, then a seldom-used tight end, caught two touchdown passes in the final 10 minutes of that crazy Monday night victory over the Chiefs.

Ebukam, an unsung linebacker and pass rusher, scored the first two touchdowns of his NFL career on a fumble return and an interception return, and he caused another interception in the fourth quarter with a hit on Patrick Mahomes.

Nearly a year later, Everett and Ebukam are in prominent positions again for the Rams (3-2), who could use big contributions when they face the San Francisco 49ers (4-0) at the Coliseum on Sunday.

Everett is getting an increasingly important role in the Rams' offense, while Ebukam is a starter again after Clay Matthews broke his jaw last week.

"Of course, we want to be on the field as much as we can," Everett said. "I think we all have a lot to contribute."

Everett has evolved slowly since the Rams chose him in 2017 with the 44th overall pick — the highest draft selection they've made in the past three years. He had only 49 receptions in his first two seasons combined, but the big tight end already has 18 catches for 223 yards this season, highlighted by his career-best seven receptions for 136 yards last week at Seattle.

Everett's increasing role is linked to coach Sean McVay's increased use of "12 personnel," the shorthand for any offensive set with one running back and two tight ends on the field. Tyler Higbee is the Rams' starting tight end, but Everett got plenty of action due to McVay's use of two tight ends on 36% of their offensive snaps against the Seahawks.

"I'm grateful to be on the field, but now when I have the ball I'm trying to seize the opportunity to the full extent," Everett said. "I think I'm able to play football more now than just trying to learn the offense. Now that I've got it down, it's more about just playing."

Everett didn't think he was even the primary target on any of the plays leading up to his seven catches, although McVay said that's not strictly true. Jared Goff has forged a confidence in Everett after three straight seasons together, and Everett has developed a knack for finding open spots when plays don't work out perfectly.

"He made a bunch of plays (at Seattle), and really that's what he's done when he's gotten his opportunities," McVay said.

Ebukam was a starter for the Rams last year in 14 regular season games and two playoff contests, including the Super Bowl. He has been a backup this season behind pass-rushing specialists Dante Fowler and Matthews, who joined the Rams as a free agent and made six sacks in five games before getting hurt.

The Rams need Ebukam to step confidently into the shoes of their six-time Pro Bowl newcomer when they face Jimmy Garoppolo and the Niners' powerful offense.

"You've just got to take it like it is," Ebukam said of losing his starting spot. "That's a future Hall of Famer that they put in front of you, so I'm not going to sit here and question it, because he's been eating on the field. I just want to do that whenever I get the chance."

Ebukam credits Matthews with an influence on his game, encouraging him to play more aggressively and freely instead of being scheme-bound. Matthews' instinctual play has rubbed off on him, Ebukam said.

"He goes against a lot of the rules, because he just already knows what's going to happen," Ebukam said. "I've just got to make sure I'm able to do the same thing and have an impact just like he did."

NOTES: CB Aqib Talib has been ruled out for Sunday's game due to bruised ribs, McVay said. Troy Hill is expected to start in place of the five-time Pro Bowl selection. ... RB Todd Gurley is doubtful, but not definitively ruled out after missing another practice with a thigh bruise. Malcolm Brown and rookie Darrell Henderson would fill in for him. ... Gurley, Ebukam and safety John Johnson were evacuated from their homes as a precaution because of the fires on the outskirts of the Los Angeles metroplex.