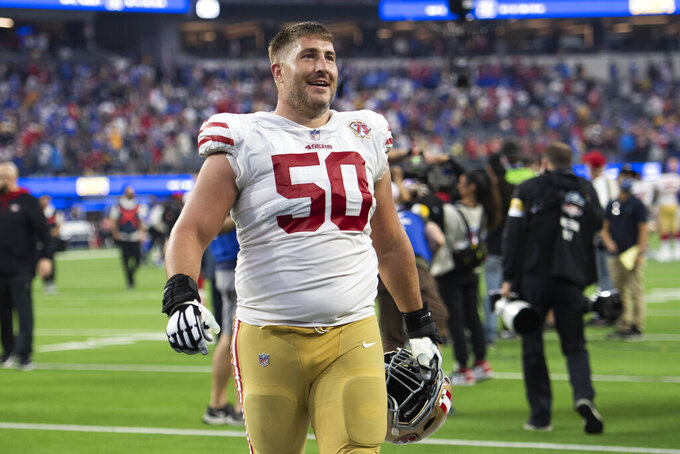 FILE - San Francisco 49ers center Alex Mack (50) walks back to the locker room after an NFL football game against the Los Angeles Rams on Sunday, Jan. 9, 2022, in Inglewood, Calif. Seven-time Pro Bowl center Alex Mack is retiring after 13 years in the NFL, leaving a major hole in the middle of the offensive line for the San Francisco 49ers. The 36-year-old Mack announced his retirement on Friday, June 3, 2022, in a move the Niners had been bracing for this offseason. (AP Photo/Kyusung Gong, File)

SANTA CLARA, Calif. (AP) — Seven-time Pro Bowl center Alex Mack is retiring after 13 years in the NFL, leaving a major hole in the middle of the offensive line for the San Francisco 49ers.

The 36-year-old Mack announced his retirement on Friday in a move the Niners had been bracing for this offseason.

“I am so grateful to the game of football and everything it has given me,” Mack said in a statement posted on his Twitter account. “From the very start it helped shape who I am and taught me life lessons. I started to play football because it was fun and that never changed.”

Mack thanked the “dedicated fan bases” in San Francisco, Atlanta and Cleveland where he spent his career, the coaches who “tolerated my stubbornness,” his teammates, his opponents and his family and friends.

“This is really more a ‘thank you’ than ‘goodbye,’” he said. “From draft night to the final whistle, I will carry these special memories, and each of these treasured relationships with me into my next chapter.”

Mack was one of the most consistent performers since being drafted 21st overall out of California by the Browns in 2009.

He became an immediate starter as a rookie, made his first Pro Bowl in his second season, was a second-team All-Pro three times and finished his career as a Pro Bowler in his only season in San Francisco.

“We would like to thank Alex for all that he brought to the 49ers throughout the 2021 season,” general manager John Lynch and coach Kyle Shanahan said in a statement. “The center position in the NFL is the heartbeat of an offense and Alex’s intellect, consistency, love for the game and professional approach made a lasting impression over the course of his 13 NFL seasons. Congratulations to Alex on a highly decorated NFL career and we wish him nothing but success in his post-playing career.”

His retirement leaves a void on San Francisco's line that already had to replace left guard Laken Tomlinson, who signed with the Jets in free agency.

Despite the strong possibility Mack wouldn't be back, the Niners didn't sign a center in free agency or draft one.

Jake Brendel, who has three starts since entering the league in 2016, has been filling that spot in offseason workouts. Daniel Brunskill, who started at right guard for San Francisco last season, has experience at center or the Niners could look to sign a veteran like J.C. Tretter, who was released by the Browns in March.