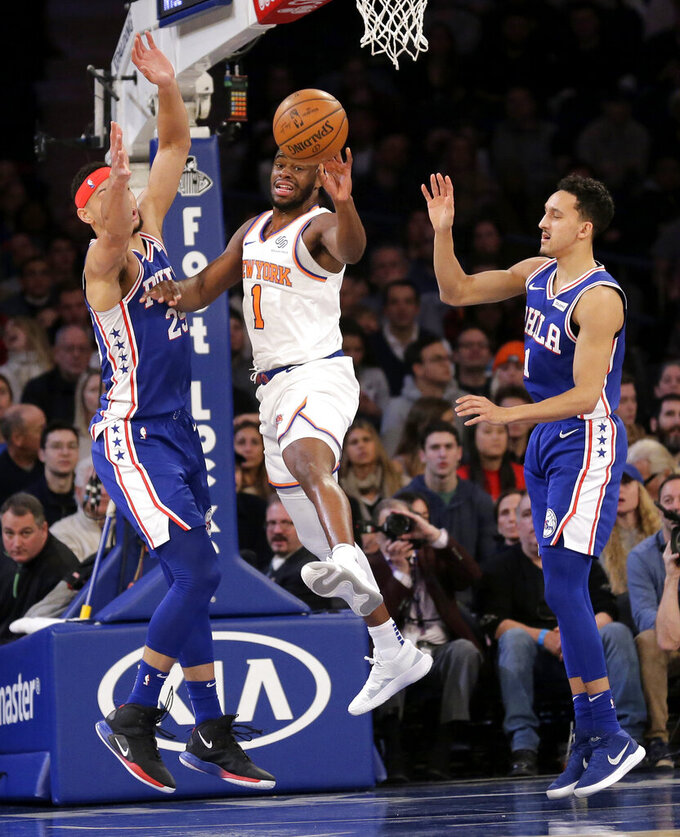 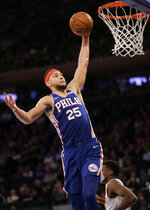 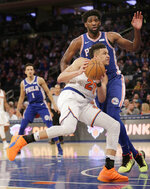 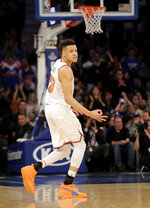 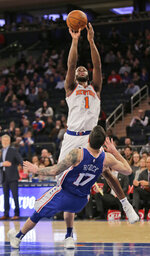 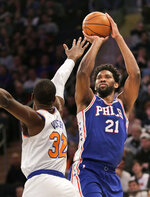 Simmons had 20 points, 22 rebounds and nine assists, and the Philadelphia 76ers beat the New York Knicks 108-105 on Sunday.

Joel Embiid scored 26 points for the Sixers, who were coming off a 123-121 home loss against Atlanta on Friday night. JJ Redick added 22 points, and Jimmy Butler finished with 16.

Simmons called his team "too soft" after the loss to the lowly Hawks. He answered his own challenge with a pair of big plays late in the fourth quarter against New York.

The Knicks pulled within two on rookie Kevin Knox's 3-pointer with 3:02 left, but Simmons pulled down an offensive rebound and fed Redick for a key jumper.

A defensive rebound for Simmons set up Redick's two foul shots with 20 seconds left, lifting Philadelphia to a 106-98 lead.

"I thought especially the offensive rebound at the end of the game that led to JJ's 3, I thought that was the game," Sixers coach Brett Brown said. "They made it close at the end, but I thought his overall performance was dominant."

Knox had career-high 31 points for the Knicks, who have lost four straight and 19 of 22. Luke Kornet had a career-best 23 points.

"Those are some legendary players," Knox said. "There's a lot of other players on that list, but it just shows the work (I'm) putting in is paying off. Those are some great guys (to share) company with."

New York trailed by as many as 24 points in the second quarter, but closed to 83-82 on Kornet's basket with 11 seconds left in the third.

The 76ers responded in the fourth, beginning the quarter with an 11-0 run. Simmons capped the spurt by finding a driving Butler for a layup that made it 94-82 with 6:22 left.

"We have to lock down on defense and offensively take care of the ball," Simmons said. "I think that's really it. Everybody needs to be locked in."

New York has lost eight in a row at Madison Square Garden. The Knicks' last home win was Dec. 1 over Milwaukee.

Five of the Sixers' next six games are against teams competing for a playoff spot. They host Minnesota on Tuesday night, and then visit Indiana on Thursday. They play Oklahoma City, Houston and San Antonio during a three-game homestand beginning on Saturday against the Thunder.

76ers: Embiid also had eight rebounds and blocked six shots in his return to the lineup after missing the loss to Atlanta. Embiid was sidelined by left ankle soreness. ... It was Philadelphia's seventh straight win over the Knicks.

Knicks: G Tim Hardaway Jr. was sidelined by a left hamstring injury. He got hurt during Friday night's 121-106 loss to Atlanta. ... C Enes Kanter was held out due to what coach David Fizdale described as "flu-like symptoms." ... G Frank Ntilikina played 28 minutes after missing his last three games due to a sprained left ankle. He had eight points and six assists. ... Mudiay scored 19 points in 28 minutes off the bench.

Knicks: Will play the NBA's ninth regular-season game in London when they face the Washington Wizards on Thursday.