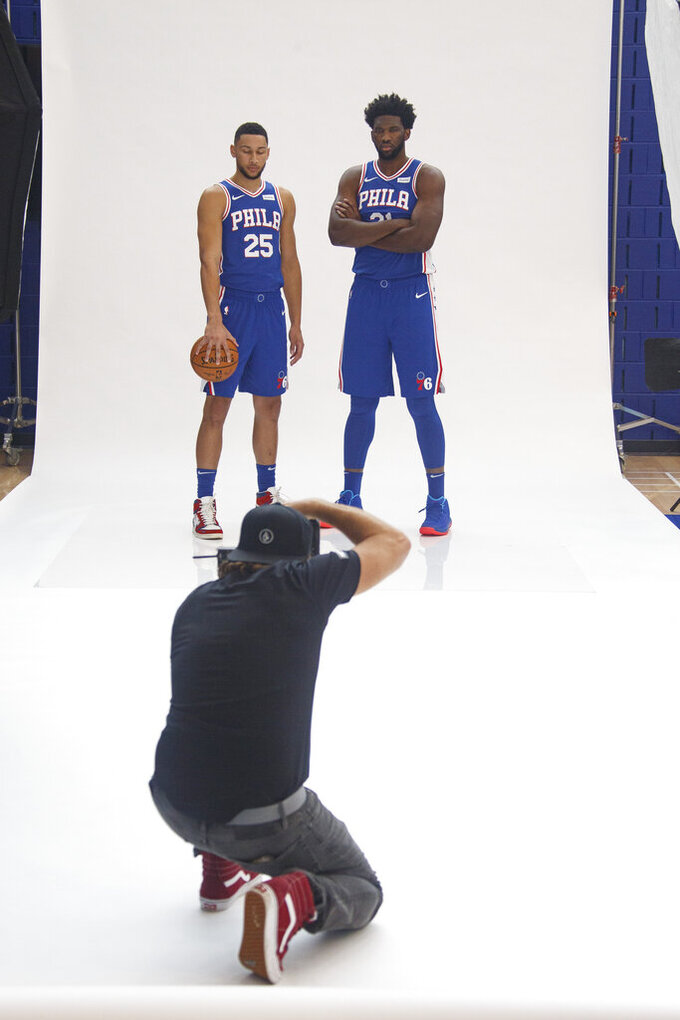 CAMDEN, N.J. (AP) — Mike Scott would rather party with 76ers fans at an NBA championship parade than scuffle with Eagles fans at a stadium parking lot.

Scott has fashioned himself a Philly folk hero since he was acquired in a February trade: he's scooped ice cream, crashed a wedding, snapped selfies, engaged with fans on Twitter and inspired his cult "Hive" fan club to get tattooed.

Scott found one fan event that wasn't so friendly when the Virginia native showed up earlier this month wearing a Redskins jersey to an Eagles tailgate before a game against Washington. Scott was caught on tape throwing a punch at a fan from a group of Eagles supporters the Sixers forward said used slurs to stir him up.

Scott said he should have walked away from the fight.

"I definitely have to be the bigger person and it should have never got to that point," he said. "I definitely should have walked away. I didn't. He was talking crazy and took it to the next level so I had to see if he'd match that energy. Y'all saw what happened with the rest of it."

Scott insisted he held no hard feelings against Philadelphia sports fans. He used social media for the reminder of the Eagles game and gave no indication any incident had happened. Scott met with 76ers general manager Elton Brand and members of the team's security staff but was not punished.

"I'm not stupid, that doesn't represent everyone," Scott said. "I still had a ball. I still had fun, took pictures with fans, throwing balls in the parking lot and I enjoyed the game."

The 31-year-old Scott has more chances to become the talk of the town — for the right reasons — after he signed a $9.8 million, two-year deal in the summer. Scott, who peppered his light-hearted session with profanities, laughed off the parking lot fight.

Says Scott, "It's Philly. We had a brawl before noon."

Other things of note from 76ers media day.

The 76ers guard has long been criticized for his reluctance to shoot the long ball. He's missed all 17 3s in his two seasons with the Sixers and his poor outside shooting has been the only thing holding him back from becoming one of the top stars in the NBA.

Simmons, the No. 1 overall draft pick in the 2016 draft, said he doesn't need 3s to become one of the top stars in the game.

The 23-year-old Simmons signed a $170 million, five-year contract extension in the offseason. He made his NBA debut in the 2017-18 season and was Rookie of the Year. He was an All-Star for the first time last season.

Simmons said his only goal is to win the 76ers their first championship since 1983 and that for all the debate over his jump shot, "I don't really care."

Joel Embiid says the 76ers have a "chance to win it all" and he expects to be in the best shape of his career to try and make it happen.

Embiid said Monday at the team's media day that he lost 20 pounds over the offseason and is shooting for at least five more before opening night by eating right and working with team officials to get in better condition. Embiid didn't say how much he weighs but is listed as 250 pounds on the depth chart.

Embiid has been hampered by injuries for most of his career and was hindered by illness and knee injuries during last season's playoff run. He says "if everything goes right," he'll play more than the 64 games of a year ago.

The center says he has "been extremely focused on what I have to do. I still have a long way to go. I'm not at my goal yet."

Embiid says his life so far has "been like a movie" and the perfect ending would be an NBA championship.

He averaged 27.5 points and 13.6 rebounds to help take the Sixers to Game 7 of the Eastern Conference semifinals. Embiid said he trusted Brand and that former GM Bryan Colangelo (fired last year in a Twitter scandal) "wasn't all that."