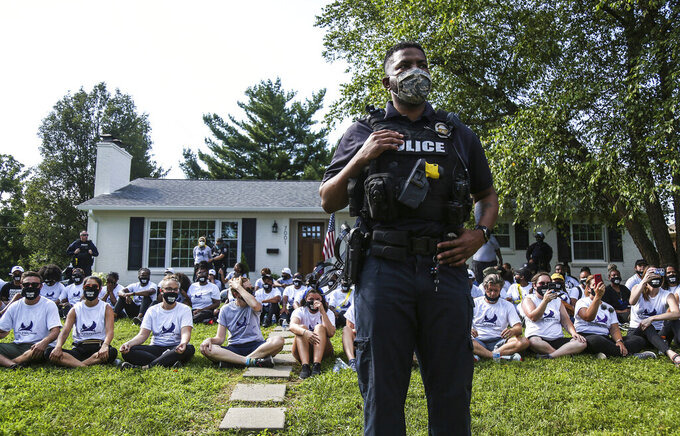 In this image from video, a Louisville Metro Police Department office stands guard outside the home of Kentucky Attorney General Daniel Cameron as protestors sit in his front yard in Louisville, Kentucky Tuesday, July 14, 2020. About two dozen protestors were arrested. Protesters were chanting Breonna Taylor's name as well as calling for justice after the 26-year-old emergency room technician was fatally shot by LMPD in her South End Apartment while police were serving a search warrant. Cameron said he still has no timeline for when his office will conclude its investigation of the case. (Mary Ann Gerth/Courier Journal via AP) 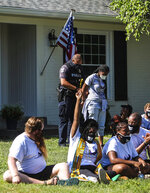 LOUISVILLE, Ky. (AP) — Eighty-seven demonstrators who gathered at the home of Kentucky’s attorney general to demand justice for Breonna Taylor have been arrested and charged with a felony for trying to “intimidate” the prosecutor, police said.

Protesters with the social justice organization Until Freedom gathered for a sit-in on the front yard of a Louisville home owned by Kentucky Attorney General Daniel Cameron on Tuesday afternoon, news outlets reported.

They were arrested after refusing to leave and — having been instructed beforehand by protest organizers not to resist — could be seen lining up to await their transfer to jail.

Among those arrested were NFL player Kenny Stills, a wide receiver for the Houston Texans, and Porsha Williams of “Real Housewives of Atlanta.” Several of the protesters were released from jail on Wednesday afternoon.

Taylor, a 26-year-old Black woman, was fatally shot when police officers burst into her Louisville apartment using a no-knock warrant in the early morning hours of March 13 during a narcotics investigation. The warrant to search her home was in connection with a suspect who did not live there and no drugs were found inside.

The shooting set off weeks of protests, policy changes and a call for the officers who shot Taylor to be criminally charged. One officer has been fired, but no charges have been filed. Investigations into the shooting are continuing.

Stills posted on social media Wednesday afternoon that he was “arrested for peacefully protesting. While Breonna Taylor's murderers are still out on the street.” None of the Louisville officers involved in delivering the warrant at Taylor's home have been criminally charged.

Cameron, a Republican and Kentucky's first African American state attorney general, said on Monday that he still has no timeline for when his office will conclude its investigation of the case.

“We are here to hold Daniel Cameron accountable and make sure that he does his job, because he is not doing his job," said Until Freedom co-founder Linda Sarsour.

Protesters were charged with “intimidating a participant in a legal process," a class D felony in Kentucky that is punishable from one to five years in prison upon conviction. That charge is related to Cameron's role as prosecutor of the Taylor investigation.

The protesters were charged with a felony because officers heard them "chanting that if they didn’t get what they want, they would burn it down,” Louisville police said Wednesday afternoon in an emailed statement, referring to Cameron's house. “That was deemed an attempt to intimidate, persuade or influence the attorney general’s decision,” the statement said.

The Jefferson County Commonwealth's Attorney's office was not consulted about the filing of the felony charges, spokesman Jeff Cooke said Wednesday. Cooke said a judge at the county's District Court level will decide if there is probable cause to move the felony charge to a grand jury. If the grand jury indicts on the charge, the commonwealth's attorney will then assume responsibility for the prosecution, he said.

Cameron said the protest won't bring justice and "only serves to further division and tension within our community.”

“From the beginning, our office has set out to do its job, to fully investigate the events surrounding the death of Ms. Breonna Taylor,” the attorney general said. “We continue with a thorough and fair investigation, and today’s events will not alter our pursuit of the truth."