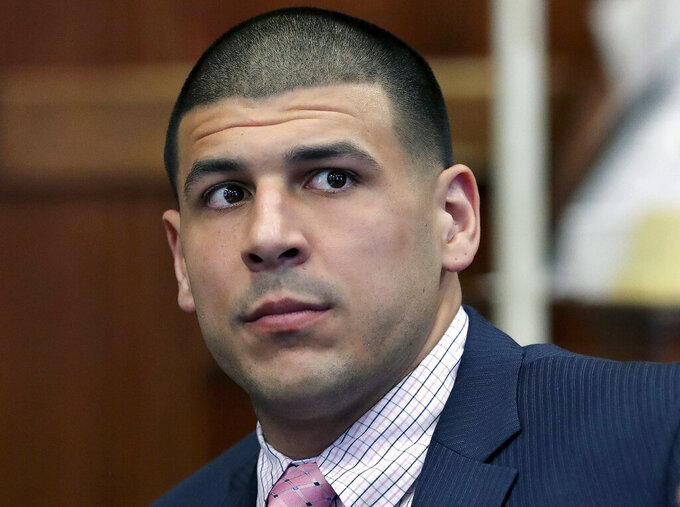 FILE - In this Oct. 5, 2016 file photo, former New England Patriots NFL football player Aaron Hernandez listens during a status conference before his double murder trial at Suffolk Superior Court in Boston. A wrongful death suit by the families of Daniel de Abreu and Safiro Furtado, the two men Hernandez had been accused of killing in 2012, was settled on Tuesday, July 23, 2019. Hernandez was acquitted in the criminal murder trial in 2017, but hanged himself in prison just days later while serving a life sentence for for the 2013 murder of Odin Lloyd. (John Blanding/The Boston Globe via AP, Pool, File)

BOSTON (AP) — The estate of former New England Patriots player Aaron Hernandez has settled a wrongful death lawsuit brought by the families of two men he was acquitted of killing.

Court records show that a Superior Court judge Tuesday issued an order of dismissal of the suit brought by the families of Daniel de Abreu and Safiro Furtado.

William Kennedy, a lawyer for the Furtado family, told The Boston Globe in an email that the terms are confidential.

Kenneth Kolpan, a lawyer for de Abreu's widow, said the settlement "honors the legacy and memory of Daniel de Abreu."

George Leontire, a lawyer for Hernandez's estate, said no assets of the estate were used to settle.

Prosecutors alleged Hernandez shot the men in 2012 after a confrontation at a nightclub.

Hernandez killed himself in prison in 2017.

43 minutes ago
W.g. Ramirez an hour ago
By John Wawrow 3 hrs ago
By Steve Megargee 4 hrs ago
By Josh Dubow 4 hrs ago