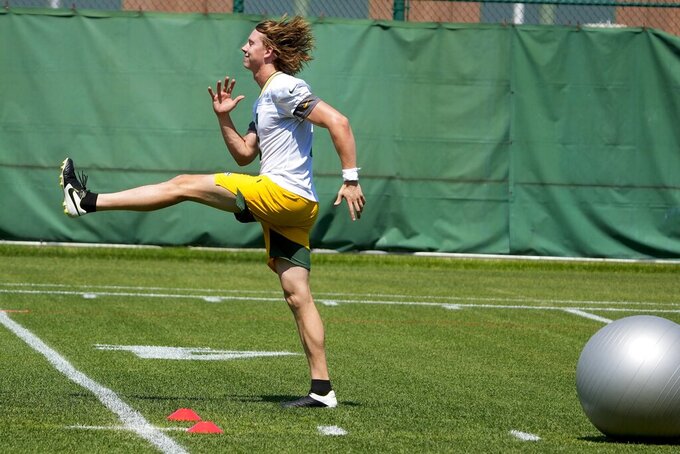 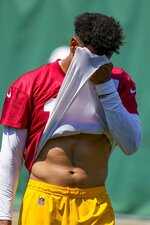 Rodgers wasn’t with the Packers for their first mandatory minicamp session on Tuesday, the latest chapter in the standoff between the team and its three-time MVP quarterback. He also hadn’t participated in the Packers’ voluntary organized team activities, which represented a change from his usual offseason routine.

“Honestly, I’ve got no expectations, man,” Adams said Tuesday. “I’m just being supportive of my guy and let it all unfold how it does. Obviously I’m praying that he comes back. We all want him back. I think everybody in this building has that same mindset, but I can only control what I can. I can’t control any of what’s going on with that situation.”

Adams and fellow receivers Allen Lazard, Marquez Valdes-Scantling, Devin Funchess and Equanimeous St. Brown all were at Tuesday’s practice after sitting out OTAs.

The Packers have the option to fine Rodgers just over $93,000 if he misses all three minicamp sessions this week without an excused absence. Packers coach Matt LaFleur wouldn’t say Tuesday whether Rodgers’ absence was excused.

“That’s team business that we’re always going to keep confidential between us and the player,” LaFleur said.

Rodgers has spent his entire career with the Packers, who selected him with the 24th overall pick in the 2005 draft. But his future with the team has been uncertain ever since ESPN reported in the hours leading up to this year’s draft that Rodgers doesn’t want to return to Green Bay.

And that’s left even his closest teammates wondering what’s next.

“I have just as much of an idea as anyone else does,” Bakhtiari said. “I think as time goes on, it’s going to sort itself out and we all will find out. Aaron is going to speak when he wants to speak. The Packers and the people making those decisions are going to speak to us when they want to speak to us and tell us what’s going on. Other than that, that’s behind closed doors and that’s out of our control.”

Rodgers was noncommittal about his future in an ESPN interview that aired May 24 but did discuss his frustrations with the organization.

The only other quarterbacks on Green Bay’s roster are 2020 first-round draft pick Jordan Love, Blake Bortles and Kurt Benkert. The Packers signed Bortles and Benkert over the last month.

LaFleur and general manager Brian Gutekunst have both said they want Rodgers back. Gutekunst has said he won’t trade Rodgers, who has three years left on his contract.

“I truly don’t know everything of what’s going on with the situation,” Adams said. “I think people expect me to know more, but I don’t prod or poke. Situations like this, you’ve got to let people come to you, and I’m not going to give any unsolicited advice. I think it’s the best to let him just do his thing, figure it out, let him know that I’m here for him and keep giving him that support and backing him up with that.”

LaFleur said there isn’t a specific date when the Packers would need to know whether Rodgers plans to play for them this fall as they get ready for the season.

“We’re going to take it one day at a time and try to remedy the situation as best we can,” he said.

NOTES: Bakhtiari said he isn’t setting a timetable on his return from a torn ACL. Bakhtiari was injured Dec. 31. … OLBs Preston Smith and Za'Darius Smith, OL Elgton Jenkins and DL Dean Lowry weren’t at Tuesday’s practice due to COVID-19-related protocols.