Adams, Dunlap find the playoffs in first seasons in Seattle 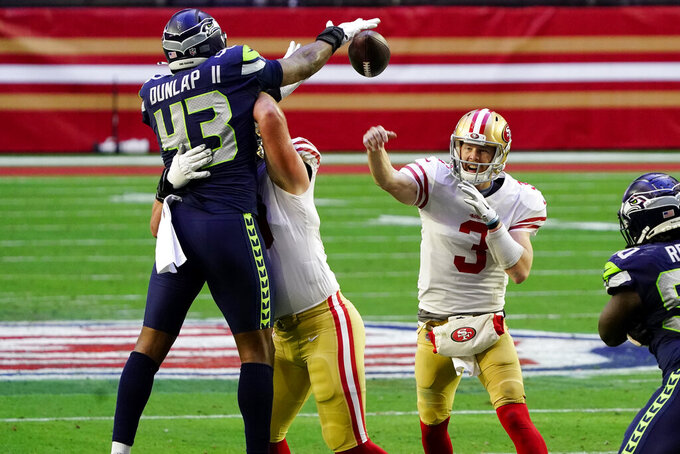 RENTON, Wash. (AP) — When Jamal Adams and Carlos Dunlap each made it clear to their former employers they wanted out, part of the reason was so they could experience the postseason.

For Adams, he wanted to get there for the first time. For Dunlap, he wanted another chance at a playoff run in the latter stages of his career.

Both got their wish, leaving behind the Jets and Bengals respectively, and helped the Seattle Seahawks claim their first division title in four years going 12-4 this season. And now comes part of their reward: Saturday’s wild-card round playoff matchup against the Los Angeles Rams.

For Adams, it will be the first playoff game of his career, assuming he’s able to play. Adams suffered a left shoulder injury in the second half of last Sunday’s win over San Francisco. Seattle coach Pete Carroll said Tuesday he was hopeful Adams would be able to play, but his status wouldn’t be determined until later in the week.

For Dunlap, it will be his first playoff game since 2015 with Cincinnati. But in his five career playoff games, Dunlap has yet to experience a victory.

“It’s been five years. So it’s been a long time coming,” Dunlap said. “But these guys here have been there many times before so they know what to do when they get here. So I’m just wanting to play my part and contribute to what they asked me to do.”

Dunlap and Adams both left behind losing situations when they were traded from New York and Cincinnati to Seattle. They’ve each proven to be major contributors to a defense that has made a complete turn from earlier in the season. Over the final eight games of the regular season, no team allowed fewer points than the Seahawks.

Adams set an NFL record for the most sacks by a defensive back with 9½ in the regular season, although sacks have only been an official stat since 1982. Dunlap’s arrival seemed to help ignite Seattle’s pass rush. He has 4½ sacks in eight games with Seattle, but his presence seemed to bring legitimacy to the Seahawks defensive front.

“The fact he comes into the building, we get credibility,” Seattle defensive coordinator Ken Norton Jr. said. “He comes off the ball, now he makes everybody else across the board better on the (defensive) line.”

Adams seems to be especially enjoying his first trip to the postseason, although the sore shoulder and question of if he’ll be able to play may be tempering some of the excitement.

Adams yelled in celebration after the Seahawks clinched their playoff berth with a win over Washington and lit up a victory cigar at the podium when Seattle clinched the division by beating the Rams two weeks ago.

“I don’t want to be too happy because I don’t want people to say he’s dramatic or he hasn’t been here before,” Adams said after the win over the Rams.

Even though both players are veterans, Seattle coach Pete Carroll said he views some of his more experienced players going to the postseason for the first time with the Seahawks through the same prism as rookies.

He may not have individual conversations this week, but the message to the whole group is the same: Don’t make the event too big.

“It doesn’t mean it’s always just the young guys. It can be the guys that have never had it before, and now they’ve been dreaming about it, and now it’s this monstrous opportunity and ordeal and they don’t play like they’re capable because they make it into something it isn’t,” Carroll said.

“It’s just football, and they need to be reminded of that. It doesn’t mean it isn’t the best experience of your life and the most fun you ever had and all that kind of stuff, but they’ve got to remember to keep the perspective in the proper place, and that’s my job.”

NOTES: Adams and DT Jarran Reed (oblique) both did not practice on Tuesday. Carroll said Reed was feeling better, but still uncertain about his status for Saturday. ... Seattle activated RT Brandon Shell off the reserve/COVID-19 list and he’s expected to start vs. the Rams. Shell was placed on the list after a close contact. .. RB Carlos Hyde returned to practice after missing last week because of a non-COVID illness. ... Rookie DE Darrell Taylor was designated to return to practice Tuesday after missing the entire regular season because of a setback from offseason leg surgery.