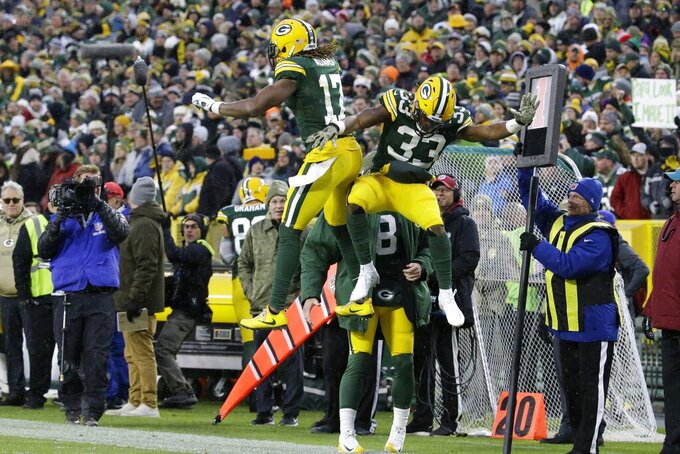 Davante Adams caught 10 passes for a career-high 180 yards in the Packers’ Week 4 matchup against the Philadelphia Eagles.

With 10:45 left in the fourth quarter, the two-time Pro Bowl receiver caught a 13-yard pass from Aaron Rodgers that set up first-and-goal at the Philadelphia 8.

After being tackled by safety Andrew Sendejo, Adams immediately reached down and grabbed his right foot. He knew something was wrong.

Adams was forced to watch as Green Bay suffered its first loss of the season.

After the 34-27 defeat, Adams told reporters he believed he had suffered a turf toe injury. He was right.

Adams was sidelined for the next four games. During that stretch, the Packers didn’t miss a beat, going 4-0 and posting staggering offensive numbers.

“I can promise you we need him and we're a better offense with 17 on the field,” Rodgers said of Adams following a 42-24 win over the Raiders in Week 7. “We've just been spreading it out a little bit more and guys have been stepping up. ... I think without him there, we've had to scheme up plays for other guys and guys have made plays when their number's been called.”

Undrafted second-year receiver Allen Lazard had a breakout game while Adams was sidelined, as did 6-foot-4 speedster Marquez Valdes-Scantling. But no players benefited more from Adams’ absence than running backs Jamaal Williams and Aaron Jones.

“Yeah, I think it is something that’s kind of evolved,” Packers coach Matt LaFleur said. “And those guys have done a great job, both those guys. I know we talk about Aaron Jones quite a bit, but Jamaal Williams, he brings so much energy, so much juice. He’s a tough, physical, hard-nosed guy. He’s tough to bring down. He breaks tackles. I think he’s done a great job in the pass game, as well. We are really, really lucky to have that one-two punch with those guys.”

Jones was up first. The third-year pro scored four rushing touchdowns in a 34-24 victory over the Cowboys in Week 5. Jones, who played high school and college ball in El Paso, Texas, became the first player to run for four touchdowns against Dallas.

Williams, who suffered a concussion in Week 4 and was inactive against the Cowboys, followed up Jones’ big day the following week with 104 yards on 14 carries and a receiving touchdown in a 23-22 victory against the Lions. It was the second 100-yard game of his career, the other coming as a rookie in 2017.

“The boy got too many touchdowns,” Williams said of Jones. “All I know is, inside the 20, you hand him the ball, he’s going to get it in the end zone.”

The Packers are sitting at 8-2 with a matchup at San Francisco on Nov. 24. A big reason for that is Jones. The 5-foot-9, 208-pound back is tied with Christian McCaffrey for the league lead in rushing touchdowns (11) and total touchdowns (14).

Rodgers said after the 24-16 victory over the Panthers that it was time to start mentioning Jones in the conversation for league MVP.

What does Williams think?

“Do I see him as MVP? Most definitely,” Williams said.

“I don’t see why not,” Adams said of Jones. “I mean, he’s been doing everything.”