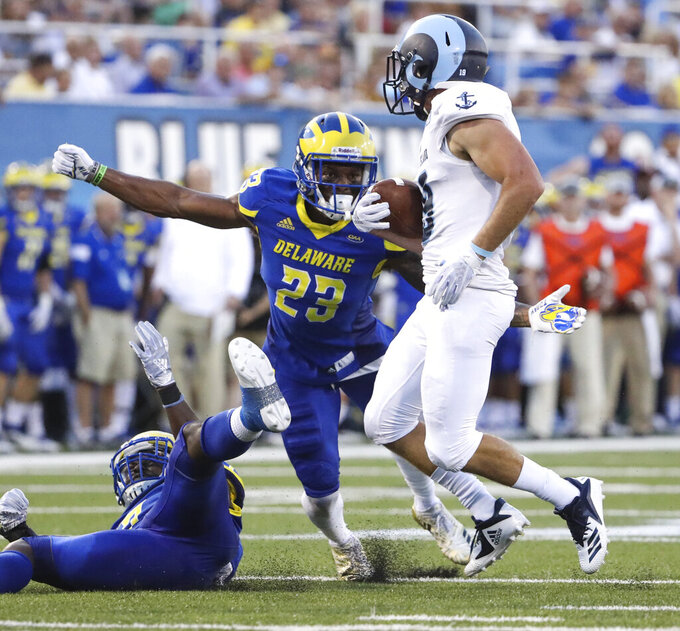 FILE - In this Aug. 30, 2018, file photo, Delaware's Nasir Adderley (23) moves in on Rhode Island running back Matt Pires in the first half of an NCAA college football game at Delaware Stadium in Newark, Del. University of Delaware safety Nasir Adderley was in high school when he connected with his grandfather's first cousin, Hall of Fame defensive back Herb Adderley, who sent him videos of his playing days during the Vince Lombardi era in Green Bay. The elder Adderley would become a huge influence in his life as Nassir lost his grandfather, then blossomed into an NFL prospect himself. (William Bretzger/The News Journal via AP, File)

More than a surname binds Nasir and Herb Adderley, distant-but-oh-so-close cousins from Philadelphia who are separated in age by six decades but tethered tight by love, creed and football.

The post-millennial and soon-to-be octogenarian make up one of the best stories of the 2019 NFL draft .

Nasir, a free safety from the University of Delaware, is a projected high pick, maybe even a first-rounder like Herb, the Hall of Fame cornerback selected 12th overall in 1961, then starred for Vince Lombardi's Green Bay Packers.

Nasir said he wouldn't be the player or even the person he is today without Herb's help.

"He's been such a tremendous influence on me," Nasir said. "Obviously, on the field, but also as a man. He was always asking about school. He's just a very loving individual, very supportive. He's a man of God like I am. I just love speaking with him and I'm very happy to have him in my life."

Nasir first reached out to Herb after losing his grandfather, Nelson Adderley, who was first cousin with Herb's father, Charles Adderley, in 2008.

Raised by his mother, Ria, a store manager, Nasir never knew his father. So his male role model was his grandfather, who played football at Ohio State and in the Canadian Football League, and whose death hit Nasir hard.

"I was really just out there on my own, raised by a single mom. Just me, my mom and my little sister," Nasir said. "I just had to be the man of the house and he essentially gave me a male figure in my life."

Herb advised Nasir about school and sports, dating and driving, faith and family.

And, of course, football.

They started calling or texting nearly every day, and when they exchanged videos of their football games, the first thing Nasir noticed was how different the sport was.

"I mean, that game definitely was a lot different back in his day, just the way you were able to tackle back then," Nasir marveled. "But I really enjoyed watching film of him. I mean, he was an incredible athlete."

Herb popped in Nasir's tapes from Great Valley High School and felt like he was looking into a mirror, a 6-foot-2, 200-pound carbon copy of himself.

"Wow! There are so many similarities," Herb recalled. "Body structure-wise, tendencies on the field, movements, athletic ability, body control. I said, 'Well, doggone, he's so much like me.' But then, it's in our DNA."

It wasn't difficult for Nasir to relate to a man 58 years his elder.

"Everyone around me says I'm older than my years, and I think that myself," Nasir said. "I mean, I had to grow up faster than maybe a lot of people my age. I have a lot of respect for my elders and I know they've been through the ropes, and they've seen a lot. I love to learn and I know knowledge is power."

By the time Nasir was ready to get recruited, Herb reached out to his alma mater, Michigan State, to tell them another Adderley was ready to become a Spartan.

"And they totally ignored me," Herb said. "But Nasir told me that Delaware had called and he thought it was a good fit."

The Fightin' Blue Hens wanted Nasir to switch to defense, too.

"So, I'm thinking the coaches must see something in him the way Lombardi saw something in me," said Herb, who was converted to cornerback in the pros after being an All-Big Ten running back in East Lansing.

During one of Nasir's calls, he told Herb he was moving to cornerback.

"And I'm thinking, OK, this has to be part of the master plan," Herb said. "Because now he's playing the same position that I played and this is the position that I can help him the most at."

Nasir excelled at cornerback for two years, but deep down, Herb knew free safety was his natural position.

"Why do you say that?" Nasir wondered.

"Because that was my natural position," Herb replied. "But when I mentioned it to coach Lombardi, he said, 'I can't do that because if I did, what's going to happen to Willie Wood?'"

Nasir proved Herb right when he moved over to safety for his final two seasons at Delaware, becoming one of the best free safeties in the country and one of the most versatile DBs in this draft.

"He has everything it takes to be a great NFL defensive back," Herb said. "It fills my heart with joy."

Herb said the reason Nasir has thrived under his tutelage is that the building blocks span generations.

Nasir has rented out a room for two nights in case he doesn't get selected until the second round Friday, and he's still trying to figure out if Herb can get there. Hobbled by age and old football injuries, Herb requires a walker to get around. So if he can't make it to Nasir's draft celebration, you can bet he'll be the first one Nasir calls.

Both men know they'll always be compared to each other, which might seem like a lot to put on a young man just starting out.