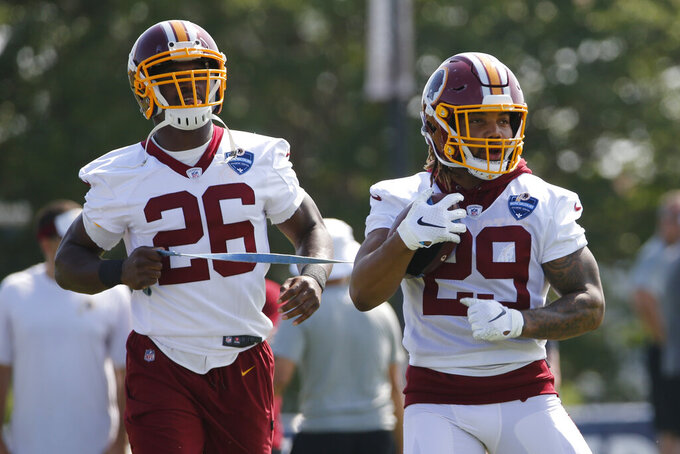 FILE - In this Friday, July 26, 2019, file photo, Washington Redskins running backs Derrius Guice (29) and Adrian Peterson (26) run drills during the NFL football training camp in Richmond, Va. Adrian Peterson told Derrius Guice to grab some ice cubes and wrap them around his surgically repaired left knee. Guice chuckled a bit. “You're really old school,” Guice said. “We got all this Cryotherapy and stuff, and you're talking about bags of ice.” Old school, meet new school in the Redskins backfield headlined by a 34-year-old climbing the all-time rushing list and a 22-year-old itching to make his NFL debut 13 months after a torn ACL. (AP Photo/Steve Helber, File)

Washington coach Jay Gruden, however, made the four-time All-Pro and 2012 NFL MVP a heathy scratch Sunday for the Redskins' opener at Philadelphia.

That left Peterson with 999 career rushing yards in a dozen season openers and it left Hall of Famers Emmitt Smith, Walter Payton and Jim Brown as well as Edgerrin James as the only members of that exclusive club.

Derrius Guice, who missed his rookie season after tearing an ACL, is Washington's No. 1 running back and Chris Thompson and former Eagles back Wendell Smallwood were his backups.

Peterson led the Redskins with 1,042 yards last season, when he scored seven times.

The Cowboys made healthy scratches of their top picks from two of the past three drafts, putting defensive linemen Taco Charlton and Trysten Hill on the inactive list for the opener against the Giants.

Charlton was a late first-round pick in 2017, while Hill was the club's top choice as a second-rounder this year. The decision to sit both comes despite defensive end Robert Quinn being suspended the first two games for violating the NFL's policy on performance-enhancers.

While Charlton had a solid preseason coming off two mostly disappointing seasons, Hill struggled from the beginning of training camp and couldn't find his way into the rotation. Hill mostly came off the bench in his final season at Central Florida, raising questions about his relationship with the coaching staff.

Ziggy Ansah's debut with the Seattle Seahawks was delayed as the new defensive end was inactive for the opener against Cincinnati.

Ansah had practiced all week, but was a late addition to the injury report on Friday listed with a shoulder injury, and was listed as questionable. Ansah missed most of training camp while recovering from offseason shoulder surgery and a groin injury picked up during his rehab.

Guard Mike Iupati (calf) was active for Seattle after going through his first full practice in more than a month on Friday.

Tackle Cordy Glenn had already been ruled out by Cincinnati, meaning Andre Smith is expected to start at left tackle.

Los Angeles Chargers kicker Michael Badgley is inactive after suffering a groin injury during Friday's practice. Ty Long, who was signed during the offseason, will handle both punting and placekicking duties against Indianapolis. Long handled both the past two seasons with the BC Lions of the Canadian Football League.

The Cardinals are going to be thin on the offensive line without starting right tackle Marcus Gilbert (knee) and backups Lamont Gaillard and Brett Toth against Detroit.

Wide receiver Michael Crabtree won't play after being signed by the Cardinals on Aug. 21. The Lions are without starting linebacker Jarrad Davis (ankle) after his injury in a preseason game two weeks ago.