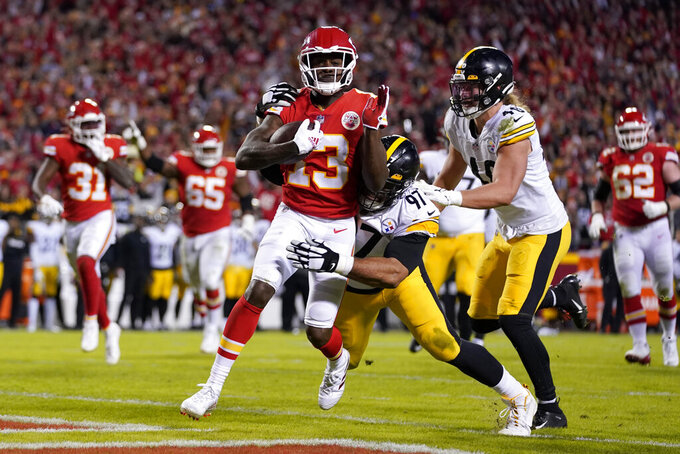 KANSAS CITY, Mo. (AP) — The Kansas City Chiefs will never take for granted winning their division, which they’ve now done six straight times, but a thorough thrashing of the Pittsburgh Steelers on Sunday night served notice to the rest of the league.

The Chiefs have their sights set on a much bigger prize.

Along with breaking the record for consecutive AFC West titles, the Chiefs (11-4) also maintained their place a game ahead of Tennessee and atop the conference standings with two games left in the regular season.

That would give them a coveted first-round bye while ensuring all of their playoff games would take place in Arrowhead Stadium.

“We're not going to pull off. We're going to keep going," said Chiefs coach Andy Reid, who'd already moved on from their 36-10 rout of the Steelers by Monday and was looking ahead to next weekend's trip to Cincinnati.

“This is a very important game against a good football team. We have to make sure we're prepared for that,” Reid said. “We don't have a cushion like in years past. That's not the way it is this year.”

Still, the Chiefs are no doubt feeling good after an eighth straight win bagged them another division title. John Madden's legendary Raiders teams managed five straight in the AFC West in the 1960s and '70s, as did the Broncos with Hall of Fame quarterback Peyton Manning — and Tim Tebow — under center in the early 2000s.

The Chiefs' dominance might not approach that of New England, which won a record 11 straight divisions with Bill Belichick and Tom Brady, but it's nevertheless an impressive feat in a league that prides itself on parity.

“This year as much as any, if you look at the AFC West, every team is still battling for a playoff spot,” Chiefs quarterback Patrick Mahomes said.

“It's a tough division to be in, and we have to win the AFC West to be where we want to be. We have more goals that we want to go after, but this is the first one. And now we have to build some momentum to the next.”

That would be securing the No. 1 seed, which could happen as early as this weekend if the Chiefs beat the Bengals and the Titans lose to the Dolphins.

Otherwise, they may need to beat the Broncos in their regular-season finale to wrap it up.

Just about everything. The Chiefs scored on their first four offensive possessions against Pittsburgh and would have gone 5 for 5 had fill-in kicker Elliott Fry not missed a field-goal try. On defense, the Chiefs forced two punts, picked off a pass, got a turnover on downs and forced Pittsburgh to miss a field goal in the first half alone.

The Chiefs were put in a tough spot when punter Tommy Townsend and unvaccinated kicker Harrison Butker tested positive for COVID-19. Fry was a spotty 3 of 4 on field goals and 3 of 4 on extra points, and Townsend's brother Johnny was shaky in his place. The Chiefs could need both of them to perform better against the Bengals.

The Chiefs got Tyreek Hill back from the COVID-19 list on Saturday, but with tight end Travis Kelce unable to test out of protocol, the Steelers doubled Hill and he managed just two catches for 19 yards. That opened up the field for Byron Pringle, though, and he responded with six catches for 75 yards and two touchdowns.

The Chiefs hoped Josh Gordon could rediscover the All-Pro form he had early in his career, particularly with Hill and Kelce slowed by the virus. But he was targeted three times and failed to catch a pass, dropping one that hit him on the hands.

Clyde Edwards-Helaire, who scored early in the game against Pittsburgh, left after two carries early in the second half with a collarbone injury. He was undergoing additional testing Monday, but the Chiefs could be forced to lean on Darrel Williams and Derrick Gore for the foreseeable future. The Chiefs also could get Jerrick McKinnon back from injured reserve.

On the defensive side, safety Tyrann Mathieu came up hobbled in the third quarter when the player he was defending made a quick cut to the middle of the field. Mathieu remained in the game for a while, but eventually left with a quad injury.

2 — Hill needs just two more receptions to break Kelce's single-season franchise record of 105 set last season. His total of 104 is already the most in a season by a wide receiver in Chiefs history.

The Chiefs visit the AFC North-leading Bengals on Sunday. Cincinnati routed the Ravens over the weekend behind a big day from Joe Burrow, who threw for 525 yards and four touchdowns. The Bengals can clinch their division title if they beat the Chiefs and the Steelers lose to the Browns.