After 0-2 starts, Giants and Falcons looking for 1st win 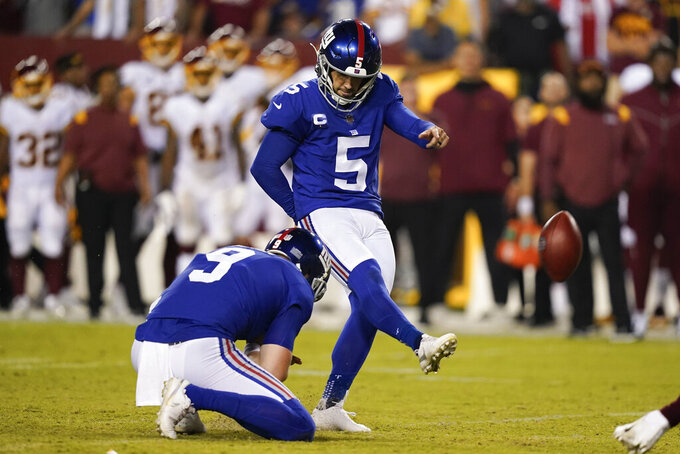 EAST RUTHERFORD, N.J. (AP) — Take a look at NFL teams losing games, and the average fan probably can come up with a half dozen quick reasons for the losses.

The quarterbacks are not playing well. The defenses are underperforming. The team can't get off the field on third downs. Turnovers. Penalties. Lack of communication. The coaching staff is bad.

Welcome to the game between the Atlanta Falcons and New York Giants on Sunday at MetLife Stadium. Both teams are 0-2 heading into the third week of the season and, of course, the fans are not happy.

Talk to the players and coaches and they are not going to point fingers, other than at themselves. When they speak about losing, they talk about it being early in the season. Some will say the team improved in the second game. Their focus is always on the next game.

Giants defensive coordinator Pat Graham hates to discuss the past. His focus is on coming up with a game plan to stop quarterback Matt Ryan, wide receiver Calvin Ridley, tight end Kyle Pitts and running back Cordarrelle Patterson.

“Those guys in the (defensive) room will probably tell you the same thing, if we don’t win, it’s not good enough,” Graham said. “I don’t care what the score is. That’s just how we’re built. We’ve got a group of selfless guys that want to win. Nobody cares about their stats. Nobody cares about what the next contract is.”

Ryan feels the same way. What he wants to see from the Falcons is a sense of urgency this week, and every week.

“I think it’s gotten better," the 14-year veteran said. "I think we have a long way to go. ... We need to have that intensity and urgency to go out there and get the job done. That’s something I’m going to try to provide all week.”

The Falcons did a good job against the Super Bowl champion Bucs last week in a 48-25 loss. They were within three points heading into the fourth quarter before two interceptions returned for touchdowns decided the outcome.

The Giants seemingly had a 29-27 win over Washington after Dustin Hopkins missed a 48-yard field goal on the final timed play. Tackle Dexter Lawrence was offside on the miss and Hopkins didn't fail the second time.

Neither team can lose focus this week.

It should be interesting to watch Giants wide receiver Kenny Golladay. Late in the fourth quarter of the loss to Washington, he started screaming at offensive coordinator Jason Garrett.

“It’s not a big deal at all,” Garrett said Thursday. “We’re excited about having Kenny Golladay here. We liked him a lot in free agency and we brought him here and he’s done a really good job for us. I love the guy. I love his competitive spirit. We talk a lot about passion, emotion and enthusiasm in our players. That’s line one and he’s demonstrating that.”

Golladay, who signed a four-year, $72 million contract, has seven catches for 102 yards and no touchdowns. He missed most of training camp with a hamstring injury. He is being listed on the injury report with a hip issue this week.

He had three catches on eight targets last week for 38 yards.

Cordarrelle Patterson has joined Mike Davis as the Falcons’ new tandem at running back.

It's a bit of a surprise, given Patterson’s background as a wide receiver and return specialist who sometimes took snaps at running back. Adding to the intrigue is Patterson still wears No. 84.

Roddy White, one of the Falcons' all-time great receivers, also wore No. 84.

The Giants are going to retire the No. 10 jersey of two-time Super Bowl MVP Eli Manning and add his name to the team's Ring of Honor at MetLife Stadium during a halftime ceremony.

Coincidently, Manning made the first of his 234 starts for the Giants against the Falcons on Nov. 21, 2004. He completed 17 of 37 passes for 162 yards, a touchdown and two interceptions in a 14-10 loss at Giants Stadium.

The Giants' defensive line has taken criticism for failing to generate a pass rush. They have eight quarterback hits and three sacks, all by former Georgia players. Rookie linebacker Azeez Ojulari has two and Lorenzo Carter one.

Defensive line coach Sean Spencer said Thursday his unit is getting pressure, but not getting home because opposing quarterbacks are getting rid of the ball quickly. Washington's Taylor Heinicke had an average release time of 2.4 seconds. Ryan is even faster, Spencer said.

Spencer wants the linemen to disrupt the opposing quarterback by getting their hands in the air and knocking down passes.

The Falcons signed 39-year-old Dustin Colquitt, a two-time Pro Bowl punter, to their practice squad Tuesday. Smith hasn’t said if Colquitt might replace Cameron Nizialek against the Giants. Nizialek had two costly shanks in the loss to Tampa Bay, but averaged a strong 46.5 yards on six punts in the opener against Philadelphia.

Smith gave rookie left guard Jalen Mayfield his second start after he struggled late in the opener. Maybe Nizialek gets another chance.