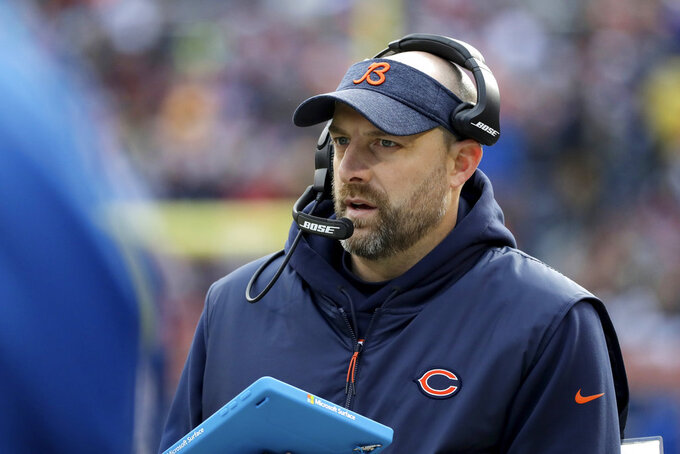 FILE- In this Dec. 16, 2018, file photo, Chicago Bears head coach Matt Nagy watches the action from the sideline during the first half of an NFL football game against the Green Bay Packers in Chicago. After winning the NFC North, the Bears host the Philadelphia Eagles in a wild card game packed with story lines on Sunday, Jan. 6, 2019. (AP Photo/Nam Y. Huh, File)

LAKE FOREST, Ill. (AP) — Not long after he was hired, Matt Nagy watched the Super Bowl with his wife at a bar near the Chicago Bears' practice facility. His good friend Doug Pederson was coaching the Philadelphia Eagles to their first Super Bowl championship.

The place was just about empty. He even had to ask for the game to be turned on.

"It was awesome," he recalled.

Nagy hopes things don't go so well for his pal when the NFC North champion Bears host the Eagles on Sunday in a wild-card game packed with storylines.

Chicago (12-4) is in the playoffs for the first time since the 2010 team won the division, making a huge jump in Nagy's first season after four straight last-place finishes. The Bears are on a 9-1 tear; the Eagles (9-7) have won five of six.

Eagles quarterback Nick Foles — last year's Super Bowl MVP — will try to deliver another standout performance while filling in for Carson Wentz. He's 6-0 in those situations the past two seasons.

Foles was particularly good the past three games with Wentz sidelined by a back injury. He tied Philip Rivers' NFL record in last week's win over Washington by completing 25 consecutive passes. He will start this one after leaving with a chest injury against the Redskins.

Alshon Jeffery will play in Chicago for the first time since the star receiver left the Bears after five seasons to sign with Philadelphia in 2017. Chicago's Trey Burton is questionable with a groin injury, but if he plays, he'll try to beat the Eagles this time around after throwing a touchdown to Foles on a trick play — "Philly Special" — in the Super Bowl victory over New England.

There will be Long brothers — Chicago guard Kyle and Philadelphia defensive end Chris — on opposing teams.

And there will be two coaches on opposite sidelines with a strong bond formed while working under Andy Reid in Philadelphia and Kansas City.

"I told him at the owners meeting this past offseason, he got that Super Bowl, right. I'm trying to follow his lead here," Nagy said. "He probably doesn't want to hear that right now, but I want to stick on that path. Ton of respect for him."

The feeling is mutual.

"Right away, you (could) tell that he was going to work himself up the ranks," Pederson said.

Some things to know:

NO-NAME SECONDARY: The Eagles have relied on backups and reserves after losing three-fourths of their starting secondary to season-ending injuries. Second-year pro Rasul Douglas and rookie Avonte Maddox have stepped up at cornerback since starters Ronald Darby and Jalen Mills went down. Veteran Corey Graham replaced safety Rodney McLeod. Maddox even played safety when Graham was out. Second-year pro Tre Sullivan also has filled in at safety and former Bears defensive back Cre'Von LeBlanc has played nickel cornerback with Sidney Jones out of the lineup. The group has improved significantly the past month.

"They've both settled into those roles well and they've made enough plays for us to win five of our last six and get in," defensive coordinator Jim Schwartz said of LeBlanc and Sullivan.

Douglas, who played just 10 snaps in the first five games, led the team with three interceptions.

The anchor in the secondary is Malcolm Jenkins, who played every defensive snap and another 136 on special teams.

ON TARGET: Like Foles, Trubisky is on a roll .

The No. 2 overall pick in the 2017 draft, he threw three interceptions in a 15-6 victory over the Los Angeles Rams on Dec. 9 after missing the previous two games because of a shoulder injury. Since then, he's been making all the right reads.

Trubisky has a 109.7 rating the past three games, completing 63 of 83 passes for 644 and three touchdowns without an interception.

BACKFIELD BY COMMITTEE: After relying on undrafted rookie Josh Adams for a bulk of the carries following season-ending injuries to Jay Ajayi and Corey Clement, the Eagles are splitting the ball carrying among Adams, veteran Darren Sproles and Wendell Smallwood. Adams ran 11 times for 50 yards last week. Smallwood was 12 for 53 and Sproles had seven for 24.

MOVING ON?: Bears defensive coordinator Vic Fangio insisted he was preparing only for the Eagles, not any head coaching interviews.

"I've done zero on that second part," he said.

The 60-year-old Fangio never has been a head coach. But he has interviewed for several openings, including the one that went to Nagy in Chicago.

In his four seasons with the Bears, Fangio has transformed a defense that ranked among the worst in team history. The Monsters of the Midway led the NFL in rushing defense, takeaways (36) and interceptions (27) while tying for third in sacks (50).

THE TURNAROUND: The Bears posted their best record since the 2006 team went 13-3 on the way to a Super Bowl appearance. Nagy won more games than any other rookie coach in franchise history, after John Fox led Chicago to a 14-34 record over the previous three seasons. The Bears also went 7-1 at home compared with 7-17 under Fox.