After half-century of frustration, Blues can exorcise demons 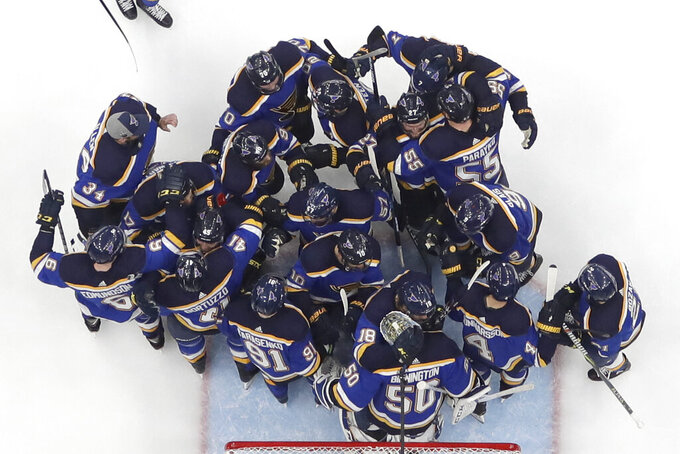 FILE - In this Tuesday, May 21, 2019 file photo, the St. Louis Blues celebrate after beating the San Jose Sharks in Game 6 of the NHL hockey Stanley Cup Western Conference final series, in St. Louis. The Blues won 5-1 to win the series 4-2 and earn a berth in the Stanley Cup Finals. (AP Photo/Jeff Roberson)

ST. LOUIS (AP) — Stanley Jackson and buddy Steven Crow can be excused if they tend to watch their beloved St. Louis Blues with their hands over their eyes, just waiting for the next thing to go wrong.

So when the Blues beat the San Jose Sharks in Game 6 to earn their first berth in the Stanley Cup Final since 1970, a rematch with the Boston Bruins 49 years in the making, the two old friends couldn't hold back.

"We were like two 9-year-olds," Jackson, 52, said. "We were hugging and jumping. We were crying like babies."

There's a lot of that going around in St. Louis. After all, few sports fans anywhere have suffered like Blues fans.

The franchise has shown a remarkable ability to tease but ultimately disappoint — missing the playoffs just nine times but never winning the Cup. Management lost three coaches who went on to win 16 Stanley Cup championships. The Blues would have abandoned St. Louis in the 1980s but the new destination was a Canadian outpost so obscure the NHL wouldn't allow it.

It's been a wild ride, and Susan Kelly has had a front-row seat.

Kelly, a 55-year-old lawyer, is the daughter of Dan Kelly, the legendary hockey broadcaster who called Blues games until his death in 1989. She inherited his love for the sport and the team, attending every home game with her 82-year-old mom. In fact, Kelly pulled out of an African safari so she won't miss the final that starts Monday in Boston.

"It was a no-brainer," Kelly said. "I bought the trip insurance just for this reason."

Despite their checkered past, the Blues have a rabid, devoted fan base, even as they share a city with baseball's beloved and storied Cardinals. Devotion to the hockey team only grew in 2016 when the NFL's Rams bolted for Los Angeles. Now, it's not uncommon for Cardinals stars such as Yadier Molina and Adam Wainwright to show up at a Blues game.

The Blues' best run of success came right off the bat. The NHL doubled in size to 12 teams in 1967 and put all six expansion teams in one division, guaranteeing one of them would reach the Stanley Cup Final.

St. Louis loaded the roster with aging veterans, including eventual Hall-of-Fame goaltenders Glenn Hall and Jacques Plante, and it worked — kind of: The Blues made the final their first three seasons but were swept every time — by Montreal in 1968 and 1969 and by the Bruins in 1970, where Bobby Orr's series-winning overtime goal came just after he was tripped by St. Louis' Noel Picard, resulting in the iconic photo of Orr seemingly flying through the air.

Maybe that trip was bad karma — until now, the Blues hadn't come close to returning to the final, a fact made even more remarkable because they're almost always in the playoffs, including 25 straight seasons starting in 1979.

So star-crossed is the franchise that what is widely considered the greatest game in Blues history was a prelude to disappointment. Dubbed the "Monday Night Miracle," the Blues trailed Calgary 5-2 with 12 minutes to play in Game 6 of the 1986 Western Conference final, tied it with a frantic rally and won it on Doug Wickenheiser's goal 7:30 into overtime.

Adding to the angst for fans is what could have been. The Blues were eliminated from the playoffs one year despite having both Wayne Gretzky and Brett Hull on the team. Hull, Brendan Shanahan and T.J. Oshie are among countless stars who became champions after leaving St. Louis.

The Blues also gave up too soon on some of the best coaches in NHL history. Scotty Bowman won a combined nine Stanley Cup titles with Montreal, Pittsburgh and Detroit after he left St. Louis in a dispute with management in 1971. Al Arbour began his coaching career in St. Louis before winning four straight titles with the New York Islanders. Joel Quenneville won three championships with the rival Chicago Blackhawks after he was fired by the Blues.

Then again, St. Louis is lucky to have a team at all. The Blues have rarely turned a profit and in 1983 were all but sold to an ownership group that would have moved them to Saskatoon, Saskatchewan. The NHL Board of Governors rejected the sale and had to briefly take control of the franchise until finding a buyer.

Bowman, who was the Blues' coach when they went to the Cup Final in 1968, 1969 and 1970, met his wife in St. Louis when she was working as a nurse there. He coached current Blues assistant Larry Robinson and feels a connection to the team to this day.

This season started out to be just another in a long line of disappointments. Despite several offseason acquisitions, the Blues were awful. Players fought in practice. Coach Mike Yeo was fired and replaced by assistant Craig Berube. By Jan. 3, St. Louis had the worst record in the NHL. Two days later, the Blues called up an unheralded goalie, 25-year-old Jordan Binnington. He won in a shutout in his first start and the turnaround was on.

St. Louis won a franchise-record 11 straight games and the Blues went from a team considering trading stars like Vladimir Tarasenko to a contender.

Kelly said she ran into Hull after the clinching game against San Jose. He hugged her and began to cry, she recalled.

"I, along with this city, have been waiting our whole lives for this," Kelly said.