After loss to Bills, Chiefs know margin for error is slim 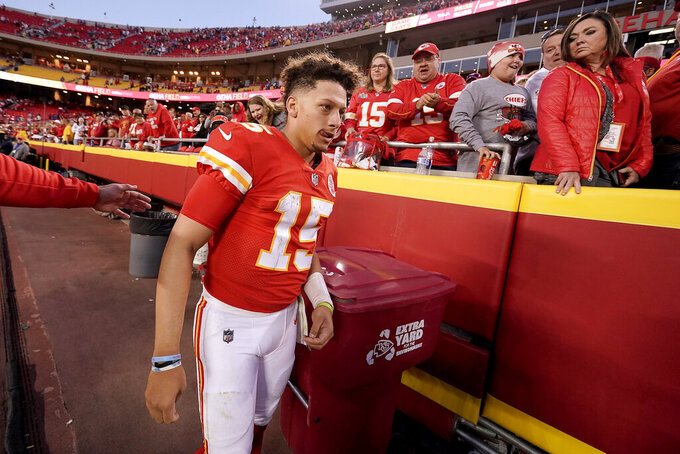 He expects to win every time he steps on the field.

So when the Chiefs quarterback threw an interception in the final minute Sunday, allowing the Bills to escape with a 24-20 victory over Kansas City, there was a quiet sense of shock inside Arrowhead Stadium — as if Chiefs fans, who had grown so accustomed to winning, couldn't believe Mahomes and Co. had come up short.

“No matter what the situation is, I expect to find a way to win. That's what this whole team expects,” Mahomes said later, after the Kansas City locker room began to clear out. “I always expect to win until there's literally not time.”

Mahomes played well: 338 yards, two touchdown passes and more highlight-worthy plays. But he also threw two picks, the one that effectively ended the game and one early on, when he threw into double coverage in the Buffalo end zone.

On the opposite side, Josh Allen was busy throwing for 329 yards with three touchdowns and no interceptions. And when the game was on the line, he found Dawson Knox for the decisive TD with just over a minute left.

“You lose a game, especially at home, it's never a good feeling,” said Mahomes, who also scrambled for 21 yards, accounting for nearly a third of the Chiefs' rushing offense. “We played some good football. We just made too many mistakes, at the end of the day. When you make mistakes against another great football team, you lose a football game.”

Indeed, the margin for error for the Chiefs this season is much narrower than years past, when they could rely on Tyreek Hill's speed or the ball-hawking ability of Tyrann Mathieu.

It takes a clean game on both sides of the ball and special teams, and Kansas City has struggled to put those together.

“We made too many mistakes when it was all said and done," Chiefs coach Andy Reid said. “It’s good to learn from this. It can benefit you down the road if you handle it right. And this team, I think, will definitely do that.”

The Chiefs, who have leaned on tight end Travis Kelce all season, are finally getting some production from their wide receivers. JuJu Smith-Schuster caught five passes for 113 yards and a touchdown and Mecole Hardman hauled in three for 42 yards and a score. (Kelce still had eight catches for 108 yards.)

“I’m trying to get to that point where the ball’s being thrown and they’re trusting me,” Smith-Schsuter said. “Honestly, it’s just time. It is only our sixth game in."

The roller coaster known as the Kansas City ground game dipped in spectacular fashion Sunday. Clyde Edwards-Helaire managed 33 yards on nine carries, Isiah Pacheco had two carries for 9 yards and Jerick McKinnon two carries for 1 yard. As a team, the Chiefs ran 18 times for 68 yards, or 3.8 per carry.

Nick Bolton led the Chiefs with 13 tackles, including two for a loss. He took over play-calling from the departed Anthony Hitchens this season and has become a rock in the middle of the Kansas City defense.

“That’s the closest thing you can get to a playoff atmosphere in the regular season,” Bolton said. “Guys were stepping up when their number was called. Playing fast and playing confident. Gave us a chance to win a football game at the end.”

Rookie cornerback Joshua Williams, who was pressed into starting with Rashad Fenton sidelined by a hamstring injury, was beaten twice for touchdowns Sunday. He clearly needs more time to develop, and could soon have it. The Chiefs hope to get first-round pick Trent McDuffie, who practiced this week for the first time since leaving the opener with a hamstring injury, back in time for next week's game at San Francisco.

The Chiefs came out of the game without any new injuries.

72 — The number of offensive plays run by the Bills, who dictated the tempo most of the game.

The Chiefs visit the 49ers in a rematch of Kansas City's Super Bowl triumph following the 2019 season.