After rooting for Jets as kid, Ruckert now playing for them 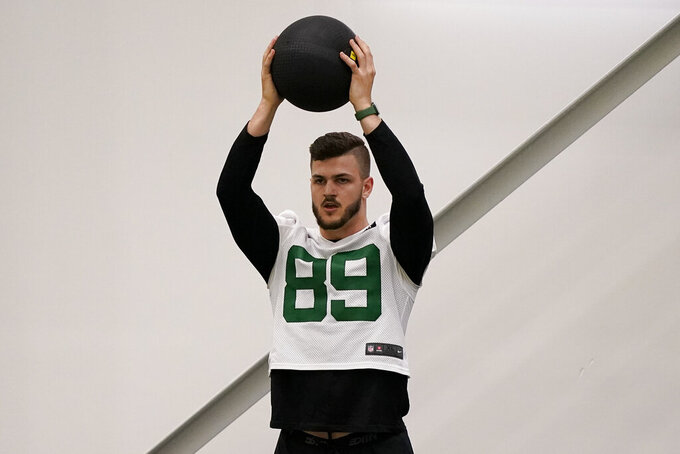 FLORHAM PARK, N.J. (AP) — Jeremy Ruckert was on the phone with the team that just drafted him while a roomful of family and friends eagerly awaited the big reveal.

The former Ohio State tight end pointed down at a table covered in NFL hats, asked for the green New York Jets cap and slipped it on his head.

That's when his father Bill absolutely lost it, screaming, “YEAH!!!” while pumping his arms in a scene captured on video by Newsday last week. Everyone else joined in on the raucous celebration, complete with a “J-E-T-S!” chant. Ruckert was a third-round draft pick — No. 101 overall — and going to the team for which he and his Long Island, New York-based family have rooted all their lives.

“It’s hard to put into words not only how I feel, but how my family feels about it,” Ruckert said. “I’m sure everybody knows how much it meant to my dad and everything — the video came out with that. But I grew up a Jets fan, me and my family, my brothers. And just to be here putting on the helmet and the jersey for the first time (Friday), it feels great and I can’t wait to get to work.”

The Lindenhurst native was often decked out in Jets gear as a kid and rooted for players such as Darrelle Revis, Leon Washington and D'Brickashaw Ferguson in the mid- to late-2000s — when the NFL was little more than a dream.

But here he is now, during rookie minicamp, standing in the locker room where his favorites one stood.

“It was surreal,” Ruckert said.

And it didn't seem likely heading into the draft, particularly because the Jets had signed both C.J. Uzomah and Tyler Conklin in free agency to revamp their tight ends spot. But when it got closer to New York's pick and Ruckert was still available, the Jets couldn't resist taking him.

“He is one of those all-around tight ends,” coach Robert Saleh said. "He’s got ability in the pass game, which wasn’t featured as much in Ohio State. Obviously, they have superstars all over the place. ... He will strain his tail off to do his job, and that’s what makes him pretty good in the run game. It’s a mentality when you get down in there, and I think he’s got that.”

The 6-foot-5. 250-pound Ruckert had 54 catches for 615 yards and 12 touchdowns in 46 games over four seasons with the Buckeyes. They're hardly eye-popping numbers, but as Saleh noted, Ohio State had quite a few other playmakers during Ruckert's time there — including the second of the Jets' three first-round picks, wide receiver Garrett Wilson.

Saleh used San Francisco's George Kittle and Detroit's T.J. Hockenson — who both played at Iowa — as examples of tight ends who, like Ruckert, didn't have gaudy receiving statistics in college. The Jets coach said it's a matter of balancing skills with the style of offense and the potential of a player.

“Is it a projection? Maybe," Saleh said. "But you also have faith in what you see and the plays that you do get that you can project them into more than what he was able to do at Ohio State. Not because they didn’t use him properly. Like I said, they’ve got a bunch of people.”

Ruckert mostly played wide receiver at Lindenhurst High School and chose to play at Ohio State because he knew he was still learning, especially at tight end — the position at which he was best suited to play in college.

“My first time blocking was when I stepped on campus in the summer at Ohio State,” Ruckert said. “And yeah, I was super raw and that’s what I wanted. I wanted to be able to be developed to be that complete guy. I hated the idea of not being able to do a job the coach wanted me to do.”

That's not to say there weren't some rough days at practice in those early days at Ohio State. Having to line up against the likes of Nick Bosa and Chase Young wasn't exactly an easy task.

“I was getting killed,” Ruckert said. “I couldn't touch those guys.”

So he kept working. At blocking, catching, running routes and anything else he thought could make him better.

With the Jets, he won't necessarily need to be an immediate playmaker with Uzomah and Conklin already here. But Ruckert wants to do everything he can to gain their trust, along with that of the coaches. And maybe, as he says, perfect his game to “become one of those all-time greats” at tight end.

“This is the team I grew up rooting for,” Ruckert said. “So they’re going to get everything I've got.”