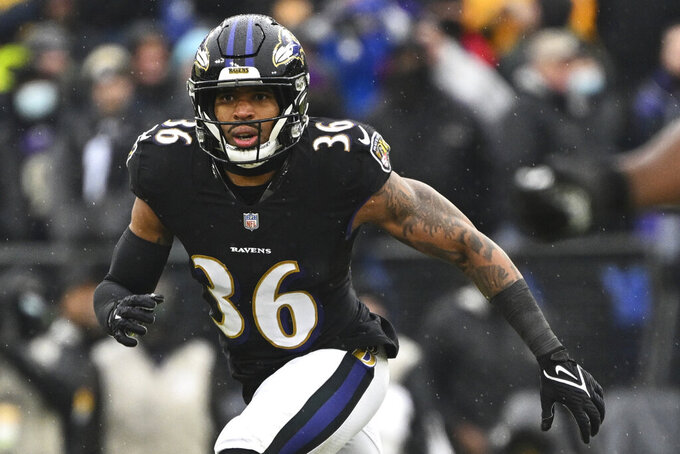 FILE - Baltimore Ravens safety Chuck Clark (36) plays during the second quarter of an NFL football game against the Pittsburgh Steelers, Sunday, Jan. 9, 2022, in Baltimore. Chuck Clark's reaction was understandable after the Ravens drafted a player at his position in the first round, but after an offseason of uncertainty, the safety is still with Baltimore heading into this season. (AP Photo/Terrance Williams, File)

OWINGS MILLS, Md. (AP) — Chuck Clark's reaction was what you might have expected after the Baltimore Ravens used a first-round draft pick on a player at his position.

The 27-year-old safety was surprised and uncertain about his future, but eventually he tried to channel those emotions into determination.

The speculation about Clark's future began in earnest when the Ravens drafted Notre Dame's Kyle Hamilton this year. In a candid talk with reporters this week, he said he was indeed caught off guard. But he's still with the team as part of a revamped secondary, and after starting 44 games the past three seasons, he's preparing to contribute again.

“I was definitely surprised. I didn’t know it was going to happen, going forward, with that in the future," Clark said. “But right now, we’re just going with it. He’s a great guy, a great teammate to be with.”

The Ravens, who wrap up their preseason schedule Saturday against Washington, are coming off an injury-filled season in which they went 8-9 and finished last in the NFL against the pass. It was no surprise to see them try to bolster the secondary in the offseason, adding free agent Marcus Williams and drafting Hamilton.

Baltimore also changed defensive coordinators, replacing Don Martindale with Mike Macdonald. Cornerback Marcus Peters is working his way back from a knee injury that cost him all of last season, and Marlon Humphrey also returns after his 2021 was cut short by a pectoral injury.

Clark is entering his sixth season with the Ravens. A sixth-round pick in 2017, he's given Baltimore some good production and was one player who was mostly healthy last year. He intercepted two passes in a late-season matchup with the Rams, returning one for a touchdown.

When last season ended with an overtime loss to Pittsburgh, Clark made an emphatic proclamation: "I really only have one message for all of the questions, you know what I’m saying? So, every question that is going to come after this, as respectfully as I can say as possible, just watch how we bounce back. That’s all I have to say.”

That was before he began to doubt his own future with the Ravens, but now that training camp is in full swing, his motivation appears strong.

“When I said that, honestly, I didn’t feel like talking,” he said. “But I just felt like that was the best answer, and that was the most raw and real answer that I could give you all. Anybody that gets sent home, no matter what sport it is, you’re like, ‘All right, I can’t wait to get back and get my turn.’”

What that entails in a crowded secondary is still unclear, but Clark says he's committed to making the best of his situation.

“There was definitely a time I didn’t know what was going to happen, honestly, and whatever was to come with that was going to come,” he said. "Now that I’m out here with my team, man, I’m just like ... I’m here, I’m locked in. They’re going to get what I got for right now.”