After winning 2 in row, Giants face real test with Vikings 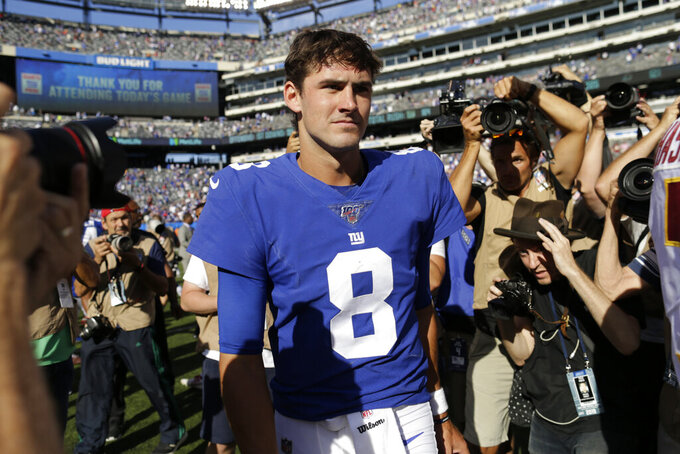 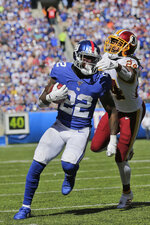 EAST RUTHERFORD, N.J. (AP) — After winning two straight games, the New York Giants have overcame a shaky start and are back in the playoff hunt with three months left in the regular season.

Now it's time for Daniel Jones and company to show they are for real.

Rallying to beat Tampa Bay and then dominating the Washington Redskins 24-3 Sunday were good enough to get the Giants back to .500.

Those wins, however, left some doubt.

The Buccaneers, who stunned the Rams Sunday, handed the Giants their first win. They stopped playing in the second half after building an 18-point lead, and missed an extra-point length field goal attempt on the final play to cost themselves a W. Washington was just a bad team.

The real test will be this Sunday. The Minnesota Vikings (2-2) are coming to MetLife Stadium and they are good. Their two losses were to Green Bay and Chicago, both 3-1.

"The one thing about this team is I think we have a bunch of tough guys that are willing to work," said coach Pat Shurmur, who was the Vikings' offensive coordinator before getting the Giants job in 2018. "If you're willing to do that, then we have a chance to improve. With some of the improvements that we've made, we've found a way to win games the last two weeks. That's really what this is about."

Jones continues to be the spark for the team since replacing Eli Manning as the starter two weeks ago. The No. 6 overall pick adds the extra dimension of being able to run. Since he took over, New York is 14 of 26 on third down and it is averaging 28 points. New York scored 31 with Manning running the team in the first two games, losing to Dallas and Buffalo, both of which are 3-1.

The Giants have not won three straight since a six-game run in 2016, the only time they made the playoffs since 2011. It's time to step up again.

The defense was lights out for the first time. Washington was limited to a field goal on a drive that started at the New York 37 following a turnover. The Redskins were 2 for 11 on third down and had 55 yards rushing and 121 passing. The 176 total yards were the fewest allowed by the Giants since 2010. New York intercepted four passes, scoring on Jabrill Peppers' 32-yard return for a touchdown.

This is nitpicking, but the Giants could be better with their decisions on returning kickoffs. They are last in the NFC and 29th of 32 in the league with an average starting field position of the 23.2 yard line. Fifteen of the 20 kickoffs New York has received have been touchbacks. Corey Ballentine has returned five, averaging 21.6 yards with a long of 28 yards. Bottom line: It would be better to take a touchback on every kick and start at the 25.

Linebacker David Mayo and cornerback Janoris Jenkins. Claimed on waivers from Carolina on Sept. 1, Mayo made his fifth career start with Alec Ogletree and Tae Davis out with injuries. He led the defense with eight tackles.

After being torched by Mike Evans and Tampa Bay, Jenkins responded with two interceptions, the 19th and 20th of his career, and his pass defense on the opening drive led to inside linebacker Ryan Connelly's interception.

Wide receiver TJ Jones. Among the final cuts, he was re-signed after the Dallas game with Sterling Shepard out. He played well against Buffalo, catching a touchdown and returning a punt 75 yards. He has not caught a pass the last two games and he muffed and recovered two punts Sunday. With Golden Tate returning from suspension, he could be a roster casualty.

Connelly, who had interceptions in his first two starts, was lost for the season with a torn ACL in his right knee. Fellow linebacker Lorenzo Carter (neck) should be ready to go Sunday. Shurmur believes Ogletree and Davis are closer to returning.

Minus-5: While the Giants had four interceptions against Washington, they are still turning the ball over too much. Jones threw two interceptions and running backs Wayne Gallman and rookie Jon Hilliman lost fumbles. Hilliman's came inside the Washington 5. New York is minus-5 for the season in turnover differential.

As well as the defense played against Washington, it needs to do it again. Redskins quarterback Case Keenum had receiver Trey Quinn running free behind the secondary twice in the first half and overthrew him. Don't expect Kirk Cousins and the Minnesota Vikings to do the same thing. The offense has to cut down on the turnovers. Jones needs to incorporate Tate as he returns from a four-game suspension for using performance enhancers.