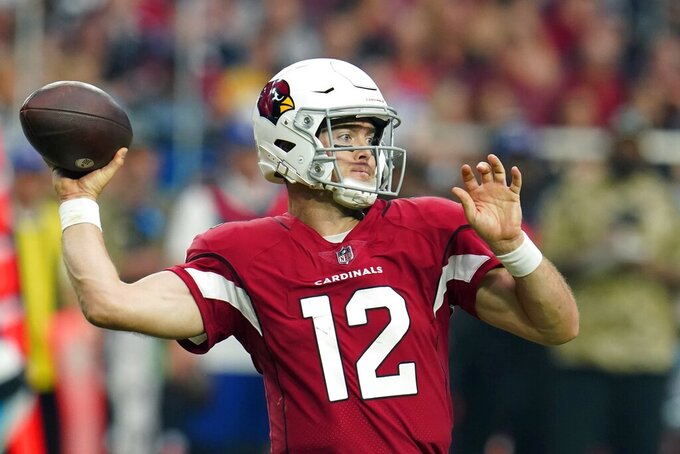 Arizona Cardinals quarterback Colt McCoy throws a pass against the Carolina Panthers during the first half of an NFL football game Sunday, Nov. 14, 2021, in Glendale, Ariz. (AP Photo/Darryl Webb)

GLENDALE, Ariz. (AP) — A horrible start turned into a very bad Sunday afternoon for the Arizona Cardinals, who have now lost two of three games and are limping into their final game before a long-awaited bye week.

Arizona (8-2) played easily its worst game of the season in a 34-10 loss to the Carolina Panthers. The Cardinals fell into a 17-0 hole by the end of the first quarter, a 23-0 hole by halftime, and were never particularly competitive against a team that came into the game below .500.

There were some obvious reasons for those problems — two in particular. The Cardinals played their second straight game without MVP-contending quarterback Kyler Murray and three-time All-Pro receiver DeAndre Hopkins, severely limiting the offense against Carolina's solid defense.

Even so, coach Kliff Kingsbury wasn't in the mood for an Arizona sob story.

“Everybody’s dealing with (injuries). Everybody around the league,” Kingsbury said. “They had their backup quarterback as well, who came in and executed at a high level, so that’s not an excuse for us.”

Kingsbury has a point. The absence of Murray and Hopkins masked some troubling trends for the team. The offensive line hasn't been protecting quite as well over the past month, while the team's defense failed to get much pressure on Carolina's P.J. Walker, who was making his second career start.

It all added up to a humbling afternoon versus the Panthers.

“We’ve got to get some stuff cleaned up, there’s no doubt,” Kingsbury said. “We started the game, turnover, turnover on downs – bad call by me there – and then an interception, and it kind of got sideways. We weren’t able to get back into it. I thought they played harder, they played faster and they just had a great plan in all three phases. They just really beat us up.”

The Cardinals are hoping Murray and Hopkins can both return for next week's game against Seattle. Kingsbury said both were trending in the correct direction.

Regardless of their status, Kingsbury said he expects Sunday's loss to the Panthers to act as a splash of cold water to the face.

“They know the game next week is a division game up in Seattle," Kingsbury said. “It will be a tremendous atmosphere and tremendous challenge. So, I expect our guys to practice a lot better and play a lot better, and we’ve got to coach a lot better.”

Yes, the defense gave up 34 points, but a big chunk of those were hard to avoid. Bad plays and decisions by the offense put Arizona's defense in a poor position time and again. It's still a very good unit and unlike the offense, has most of its playmakers healthy and available.

It's hard to tell which parts of the team actually need help and which parts simply need health. One thing the Panthers did well is limiting the effectiveness of Arizona pass rushers Markus Golden and Chandler Jones. The Cardinals had no sacks against the Panthers, allowing Walker and Cam Newton to operate mostly worry free.

S Jalen Thompson grabbed an interception on Sunday, providing one of the few bright spots in a tough day. Thompson has been one of the unsung stars of the Cardinals' defense, providing rock-solid tackling and awareness in the middle of the field.

McCoy. The 35-year-old raised expectations with his excellent performance in the team's win over the 49ers. The loss to the Panthers sent those expectations crashing back down. McCoy isn't a bad backup, but that's what he is — a backup. If the Cardinals want to do what they usually do on offense, Murray needs to be back.

The Cardinals didn't get a lot of new injuries against the Panthers. McCoy (chest) left in the second half and his availability for the Seahawks is in question. Otherwise, this week will be all about watching to see if Murray and Hopkins are well enough to play on Sunday.

11 — James Conner ran for his 11th touchdown of the season, providing Arizona's only trip to the end zone on Sunday. Conner has run for more touchdowns this season than he did for the Steelers in the previous two years combined.

Getting a win over the Seahawks in the upcoming game would be great, but really, the Cardinals just need to get through the next weekend relatively healthy. That would give Arizona a chance to rest for a few days over Thanksgiving, regroup and prepare for the last seven weeks of a season that still has plenty of promise.